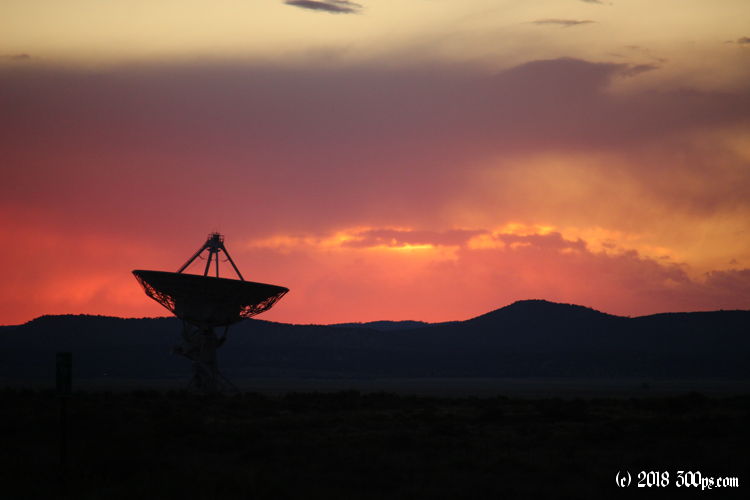 My first credit card tour on a road bike; carrying the abolute minimum.

A friend proposed going to Albuquerque for the weekend and I said: "Sure, I'll meet you there on the bicycle!". My reply was met with disbelief, but I can't pass up a good excuse to get on the bicycle and travel. This will be my first attempt at traveling on a road bike carrying only the minimum necessary to get from point A to point B.  continue reading... 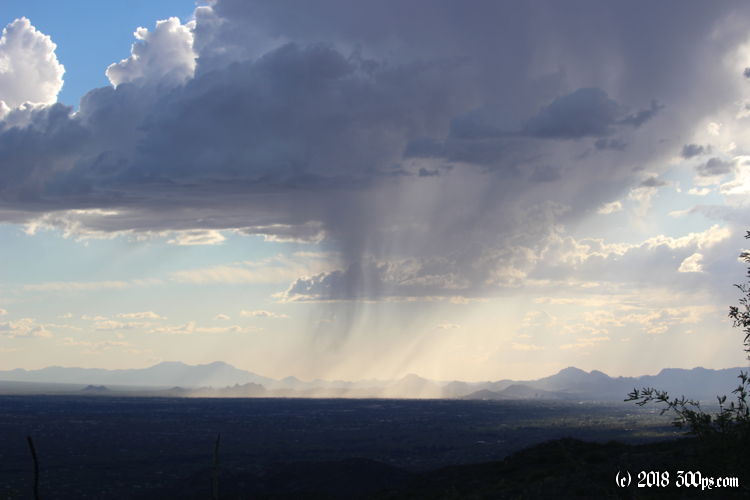 Wandering the backcountry east of Tucson

I have to wait a week before I can move into my new apartment, which gives me the perfect opportunity to take off and wander on my bicycle in the backcountry desert east-northeast of Tucson, Arizona.  continue reading... 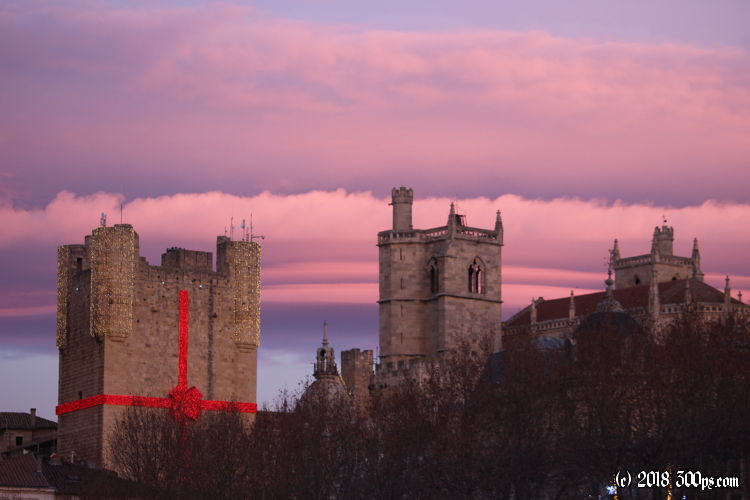 My yearly pilgrimage to the mecca of foie gras.

Every winter I cycle up the Canal du Midi to the Lot, the home of particularly delicious foie gras and friends to enjoy it with.  continue reading... 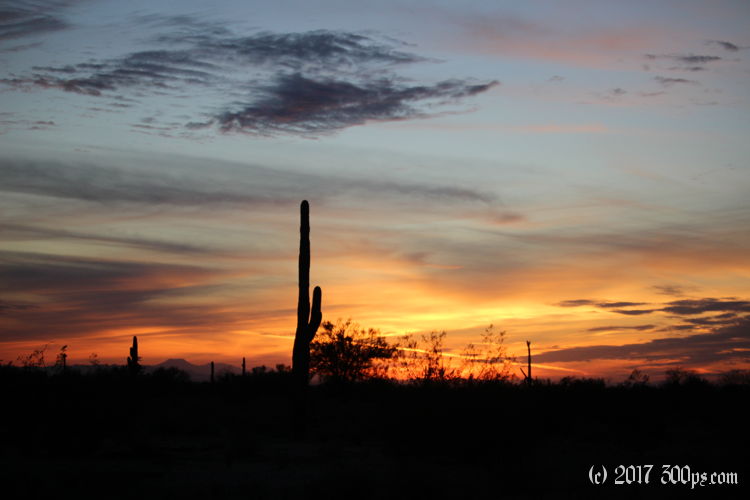 Random shortish rides that don't merit a journal of their own. 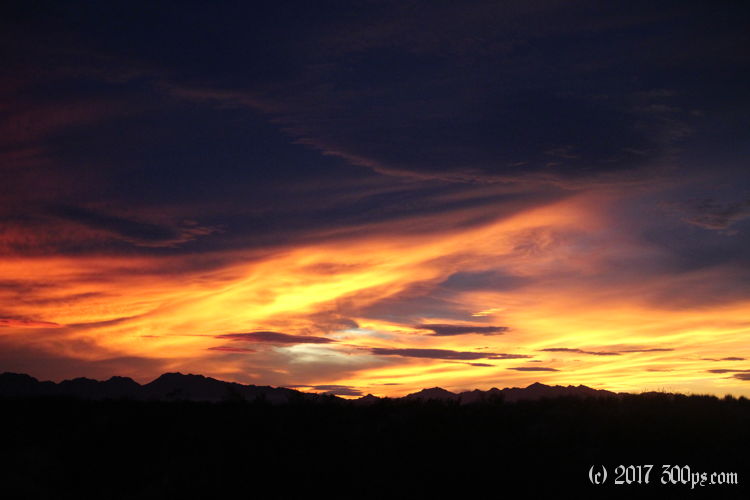 A fall jaunt deep into the Sonoran and Mojave deserts

I'm done with the motorcycle for now, time to sweat in the desert. I've found a place to store Greta, bought myself a bicycle, and now I'm off to explore parts of the desert southwest that I haven't yet seen; and maybe revisit a few I already have.  continue reading... 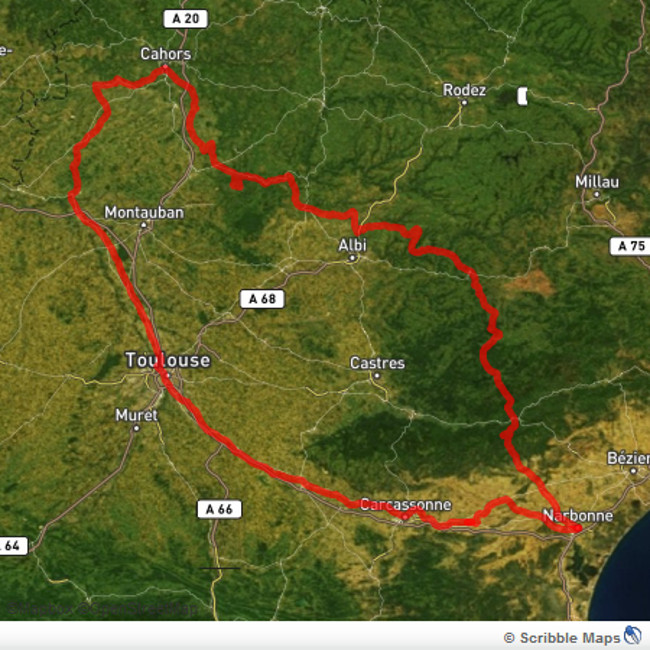 A yearly pilgrimage across southwestern France

Occitanie, a new region recently created by the French government that fuses the old regions of Languedoc-Roussillon and Midi-Pyrénées. It just so happens to neatly enclose the boundaries of where I tend to travel in France; I come to this area regularly, almost every year, to visit friends and family. When I'm here I invariably get on the bicycle to travel from Narbonne up the Canal du Midi to Cahors and back.  continue reading... 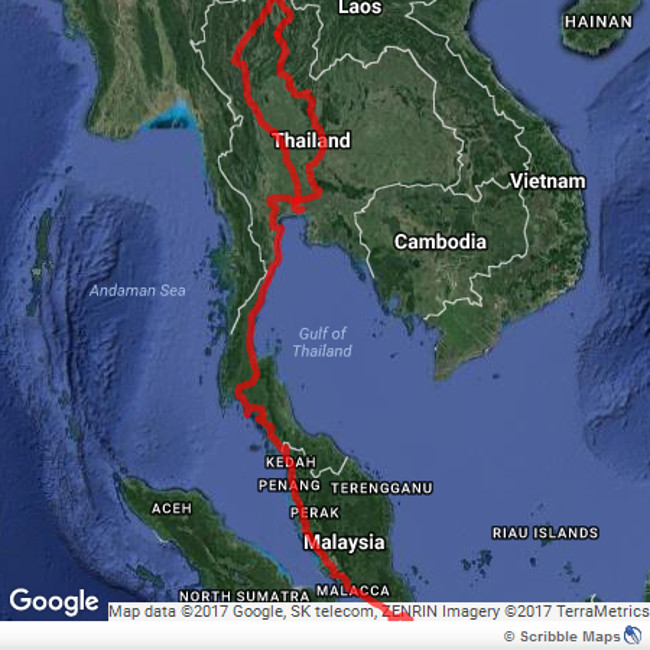 Time to leave Taiwan, heading west, eventually to Europe, but first stopping in Southeast Asia to cycle and maybe learn something about Buddhism. My exposure to Buddhism consists of having read Herman Hesse's Siddhartha; and that, many moons ago. I've always been intrigued by Eastern philosophy, I've meditated fairly regularly over the years, including a time in Argentina when I practiced Falun Gong with some people I met there. The plan is to cycle as always but perhaps I will try to learn more about this religion that has generated all these temples and devotees that I've been seeing since I arrived in Asia.   continue reading... 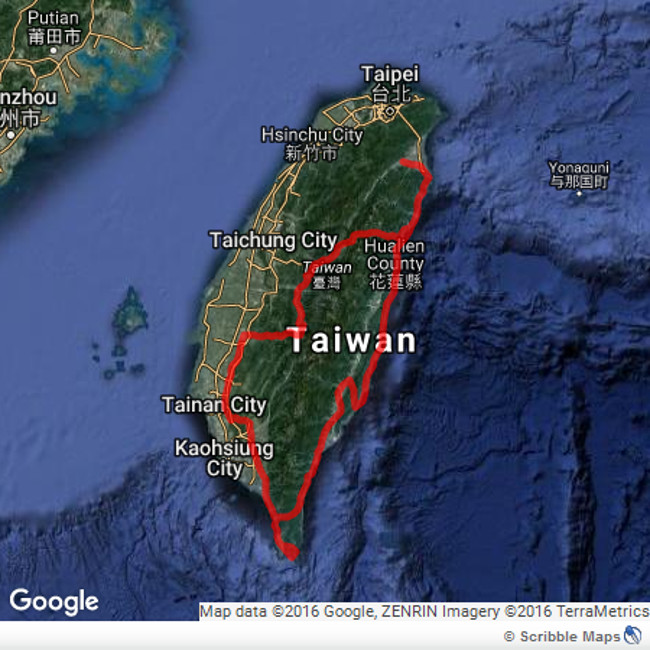 Criss-crossing and looping around Taiwan on the bicycle

I've been in Taiwan for three months but have been too busy for a longish bike trip, now I'm finally free to explore the whole island from top to bottom and side to side. Armed with limited Chinese and no camping equipment, off we go.  continue reading... 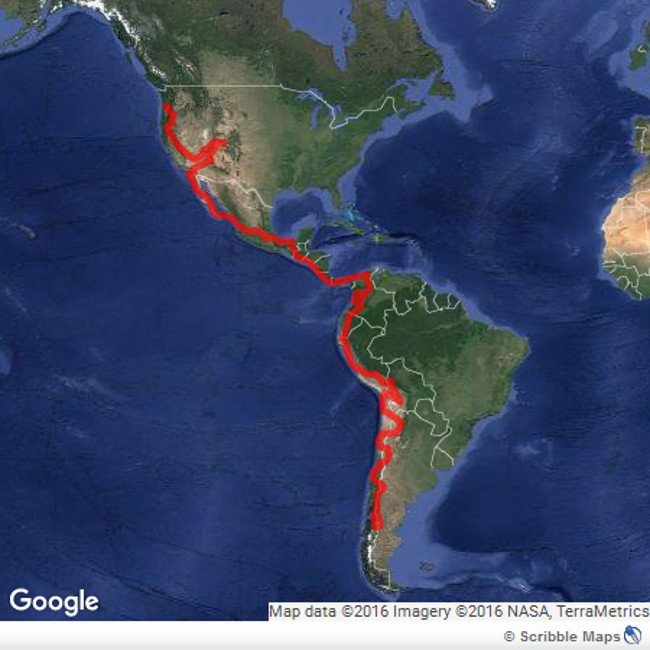 From Patagonia, Argentina to Oregon, USA by bicycle.

The doctor looked at me intently for a moment and then said: "You are not a translator."

At first I thought that he thought that I had been lying to him. "What do you mean I'm not a translator?", I said. "I have clients, they send me their stuff, I translate it, and they pay me."

"That's not what I meant," he said, holding up the results from my latest blood test. "This is not the blood of a translator."

"Umm...ok, what kind of blood is it then?" I was trying hard not to betray that I thought he was crazy. The other four doctors I had been to couldn't figure out what was wrong with me so I was going to listen.

"Look", he said, circling the serum ferritin, free iron, hematocrit, and a bunch of other values on the blood test. "These are all way too high. Your body has 300 horsepower. It's like a Porsche but you're just driving it around the city. You need to take it out on the Autobahn and let it run." (I was in Germany at the time.)

"I know you don't believe me," he continued, "but I'll show you. We're going to take blood from you until the iron level comes down and you will see."

From Parker, Arizona to 29 Palms, California.

Some information on crossing the Mojave desert, you can never carry enough water for those long stretches without services (particularly in the heat of summer).   continue reading... 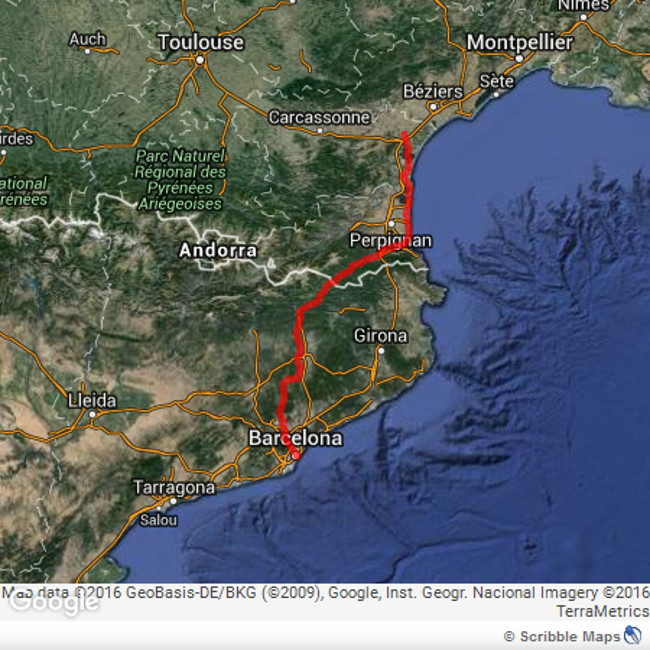 From Barcelona, Spain to Narbonne, France.

have been living and travelling on a bicycle for most of the last two years. People keep asking me: Where's your blog? Ummm...it's in development... The truth is that I have a hard time even writing down the mileage at the end of the day when I'm travelling. I get into riding and camping and dealing with all the other joys of bicycle travel and up until now I just couldn't be bothered to write things down. I am terribly impressed by CGOAB'ers who manage to keep daily accounts from such places as Kazakhstan. But I've been convinced to make more of an effort, so here goes, starting small I hadn't been on the bike since December. Comfy city life with Ri had settled in and I became a gym rat while waiting for the weather to warm up. I got a message from B inviting me up to Narbonne for a visit, "We'll bore you senseless". Nice, that would make the perfect tourism slogan for Narbonne. It was the perfect excuse to get off my ass and get back on the bike. Ri cooked me a up a huge batch of pasta and vegetables, I loaded up the panniers, and we set both of our cell phone alarms so I could get an early start out of the city to miss the Barcelona marathon chaos.  continue reading... 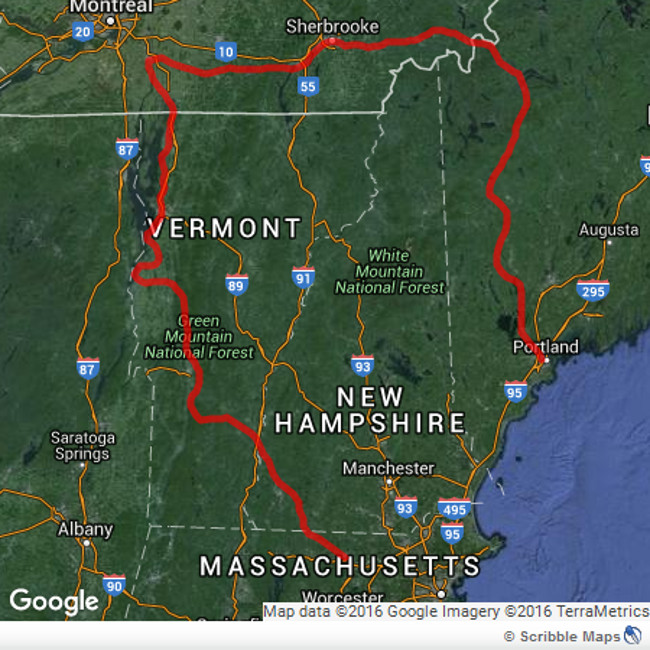 From Boston to Sherbrooke, Quebec and back.

Kudos to Quebec for building La Route Verte, a set of connecting bike paths that are positively German in their construction. The signage was impeccable, I never once got lost or questioned which way to turn. Along the way there are information kiosks with friendly assistance and maps showing the location of services. I was impressed that they were staffed even on weekdays. There was a sign for the 'sentier trans-canadien' along with the 'route verte' signs which got me to thinking: I wonder how it would be to follow the trail all the way across Canada? The back-woods track of the paths provides lots of opportunities for stealth camping. One night I was almost discovered (or run over) by someone on a dirtbike who passed within yards of my tent but thankfully didn't see me.  continue reading... 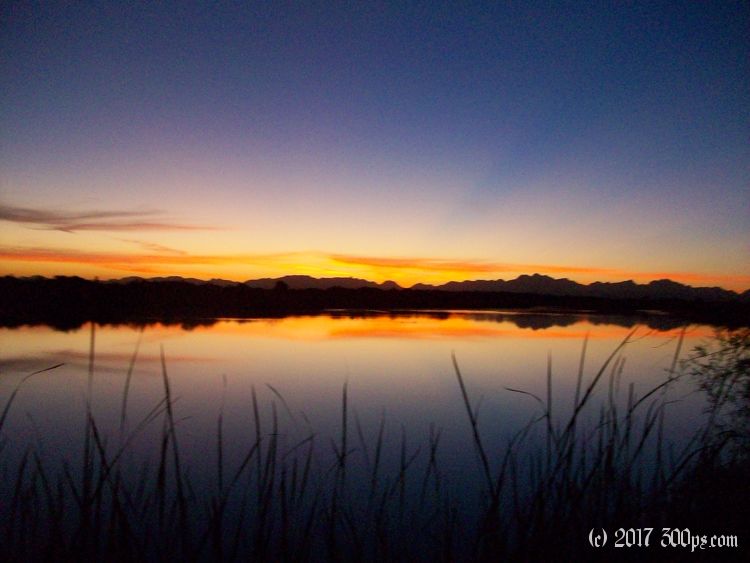 Crossing the United States from east to west, with a healthy dose of south.

Sitting on the eastern edge of North America, a look at the map raises so many possibilities that are just too tempting to ignore. Jack Kerouac grew up in Lawrence, MA, not far down the road from where I am right now. When he hit the road he went west, the obvious choice when you're backed up against an ocean to the east; like him I'm making the obvious choice. "Nowhere to go but everywhere" he wrote. The quote seems to fit my situation perfectly: I've got a surplus of energy, a taste for bicycle travel, and the money to finance an adventure...so off I go to everywhere, general direction west until I run out of land. My late start (September 1st) will probably dictate a good bit of south in this journey as well.  continue reading... 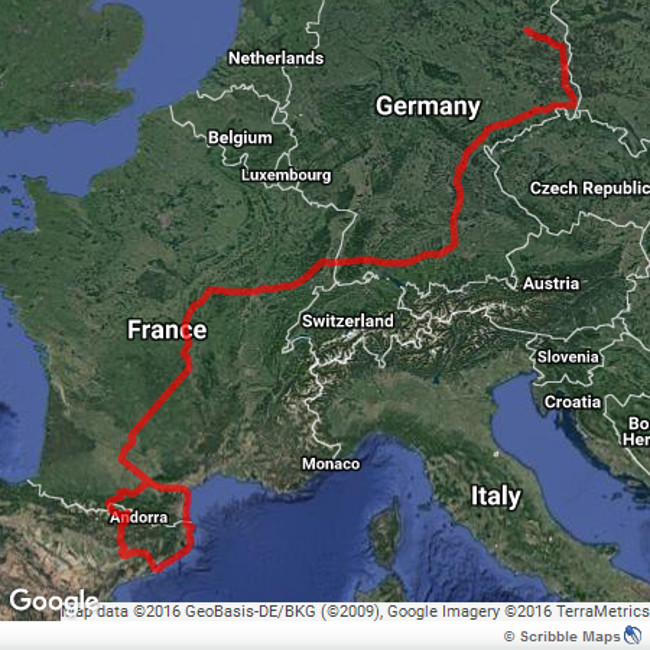 "blood and iron", from Berlin to Barcelona by bicycle

It's time to move on. My ever widening circles around Berlin on the bicycle aren't enough. I'm closing up shop and Berlin and riding the bicycle points south to see how far I can get.   continue reading... 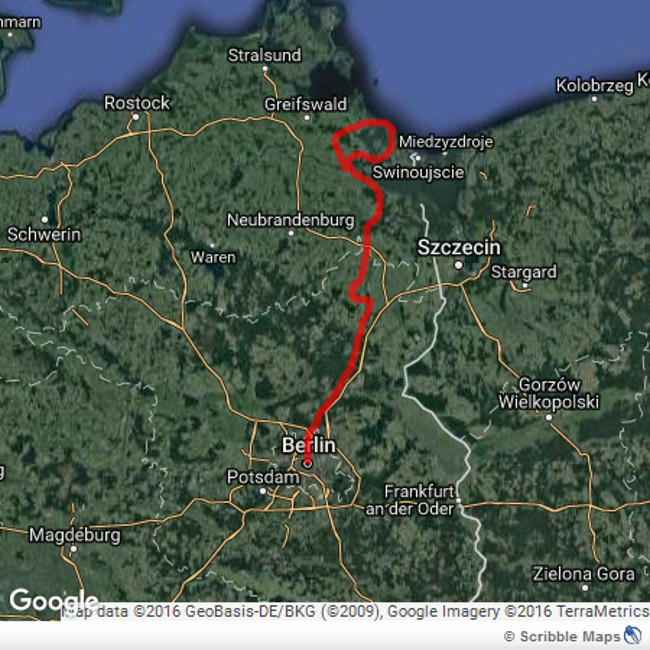 Winter ride from Berlin to the Baltic Sea

Going for a winter ride from Berlin to the Baltic Sea, my very first overnight cycling trip. Borrowed a bicycle from a friend, bungeed a bag to the back, headed north on the ice.  continue reading...