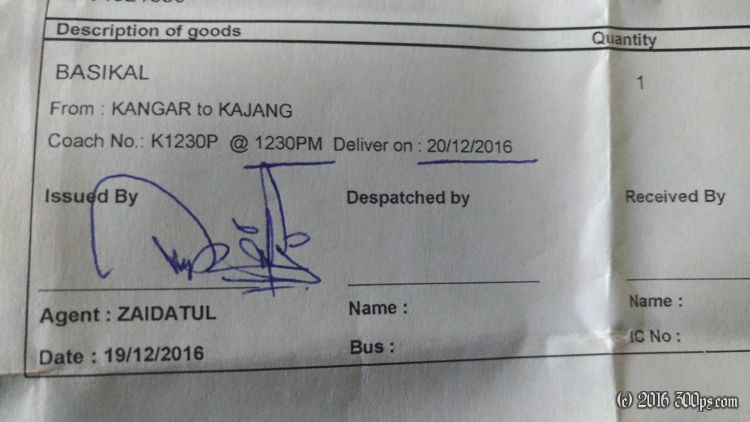 I'm running out of time to get to Singapore by the 26th: have to get a bus to skip the north so I'll make it on time. I don't like doing this, I would rather cycle the whole way, but this is the tradeoff for doing some exploration in Southern Thailand.

The weather in Kangar is pretty grim so I don't feel so bad as I make my way down to the station, hand over the bike to have them load it into the cargo bay, then take my seat that will be home for the next 10 hours. Not a lot to recount about the trip, just passing the time, punctuated by the occasional stop for bathroom and food. I chat with a few people along the way. The level of English is lightyears ahead of Thailand. I suspect some of the ethnic groups use English for communication but I'm not really sure, not having read up much on Malaysia. At any rate there are a fascinating array of faces in this country: Indian, Chinese, Indonesian, what I guess is Malay, Thai, and others that I can't identify.

The ride ends just south of Kuala Lumpur at a pretty nasty-looking neighborhood around a bus terminal. I booked a hotel on the way in so I wouldn't have to ride the bicycle anywhere at 10:30pm. The hotel is grim and the staff unfriendly. They are dead set against me putting the bike anywhere in the hotel. I end up having to lock it up outside the hotel door, which in this neighborhood certainly doesn't seem like a safe option. I decide not to make a stink out of it, just take a shower and go for dinner (which is quite good, basically what I would call Indian food), then I crash exhausted into bed.