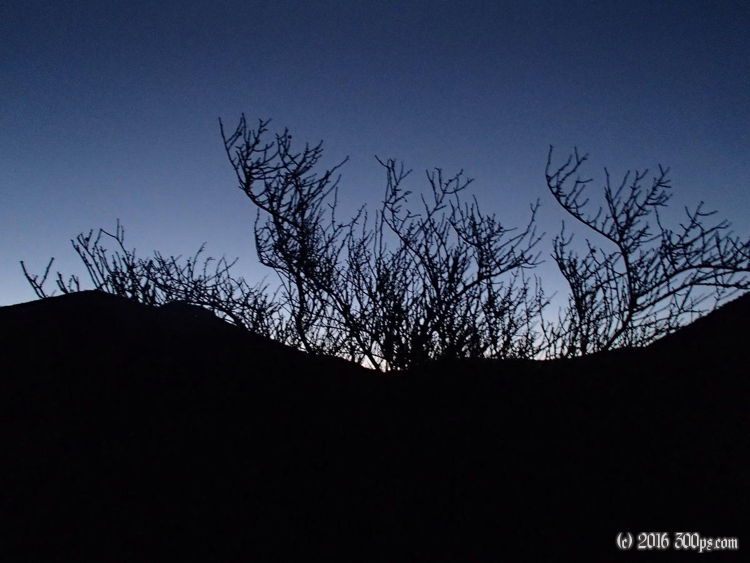 I didn't set up the tent last night and there was a lot of dew on my stuff in the morning. For supposedly one of the most arid places on the planet it was a bit of a surprise. The long, low-grade climbing continued from yesterday. I stopped at a small restaurant for eggs and bread. As it turns out I didn't need to be so concerned about water on this road, there is a small restaurant or town or mine at least every 10-20k.

It was really hot today. The sun beat down inexorably, I could feel my skin frying when the sun block started to wear thin. I kept slathering it on all day.

I stopped in Domeyko to get a coffee and some shade. Back on the road for more heat... today was all about drinking water, putting on sunblock, and avoiding trucks. In a ravine a truck passed another coming downhill on a curve while I was going up it. It scared the living shit out of me because I had limited space to get over due to a guardrail. I just jammed up against the guardrail and gave the trucker the finger as he went screaming by. Totally shitty maneuver on his part.

A while after that I saw a loaded bike coming down the hill while a truck was tailing him, beeping furiously. I don't know what the trucker's problem was, he had plenty of room to pass and there was no one coming in the other direction. The person on the bike was Yang from Taiwan. He has been on the road since last April and has already crossed Asia and Europe. He took a flight from Europe to Lima, Peru and now he is headed down to Ushuaia. Blog here: http://ethan-around-the-world.blogspot.com/.

We talked for a bit about Chile and Argentina then it was back to the heat and the climbing. Towards the end of the day the headwinds really picked up so by the time I got to Vallenar I was done... I found an hospedaje and got a room for the night. I've been camping for 9 days in a row so it was easy to justify.

The guy working the night shift gave me a ride up to a laundry place he knows and they said they would have my clothes done by 9am tomorrow. Awesome! I went to the supermarket and bought loads of fruit... I had a serious craving for fruit, yoghurt, and ice cream. I brought it back to the hospedaje and ate 4 bananas, 4 peaches, a carton of strawberries, 2 yoghurts and a pint of ice cream. Then I went out for a completo (hot dog with avocado and tomato), afterwards I went back to the hospedaje to polish off a pack of cookies and another banana. Guess I was hungry.