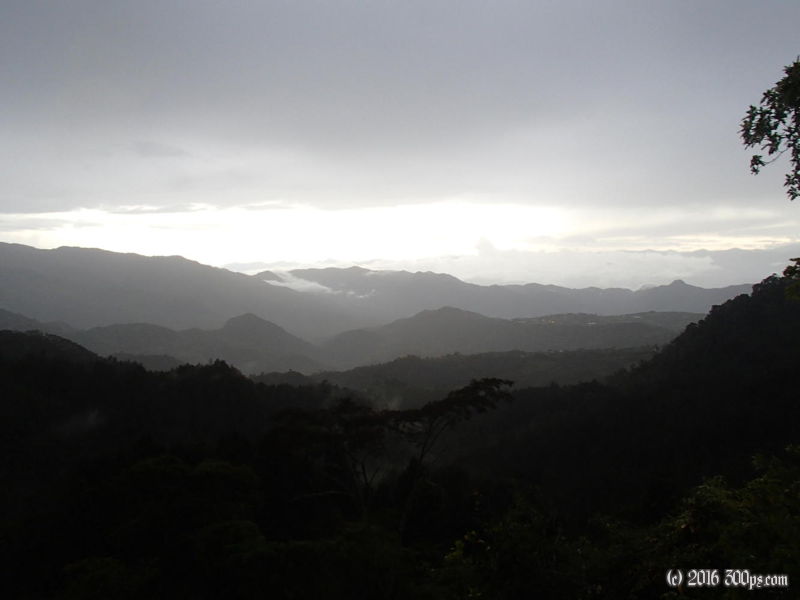 I didn't want to get out of the hotel bed this morning but the extremely loud church bells from the cathedral down the street finally got me going. I went out for an excellent coffee (as it should be in this area) on the town square, got some breakfast, then packed up my junk. End result: on the road by 10am.

The road leaving Jardín for Río Sucio starts out with a continuous 20 kilometer climb with 1,080 meters of elevation gain. After 4 or 5 kilometers it's all ripio with the occasional stretch of mud thrown in. A guy who had pulled up next to me leaving Jardín had told me that it was downhill after that first summit but that turned out to not be the case. I guess a motorcyclist probably has a different concept about what constitutes climbing. The road bounced up and down after that first ascent for another 10 kilometers, the road tops out somewhere around 2,750 meters. I was surprised to get that high in this area, I was expecting lower elevations. I wasn't into the big descent for long before my back tire went flat. A thunderstorm was just rolling in so I changed the tire as fast as I could; as I was getting back on the bike the rain started coming pretty hard. I rode through it for a while until I saw a shelter by the side of the road. Just as I got under it the skies really opened up, complete with wild winds and hail. I ended up hanging out there for a good hour waiting for it to calm down. For the last half hour I was joined by the owner of the farm across the way. He grows strawberries and blackberries as well as having a bunch of dairy cows. He told me that this area was pretty rough ten years ago because some FARC guerrillas installed themselves up in the national park that I had ridden through an hour before. Now he says everything is quite peaceful in this area.

The rain didn't look like it was going to completely stop so I headed back out while I still had some daylight. It was a wet and muddy descent down into Río Sucio, I was elated to hit brand new pavement about 3 kilometers outside of town. I got to the main square and grabbed a cheap hotel then went to dinner.