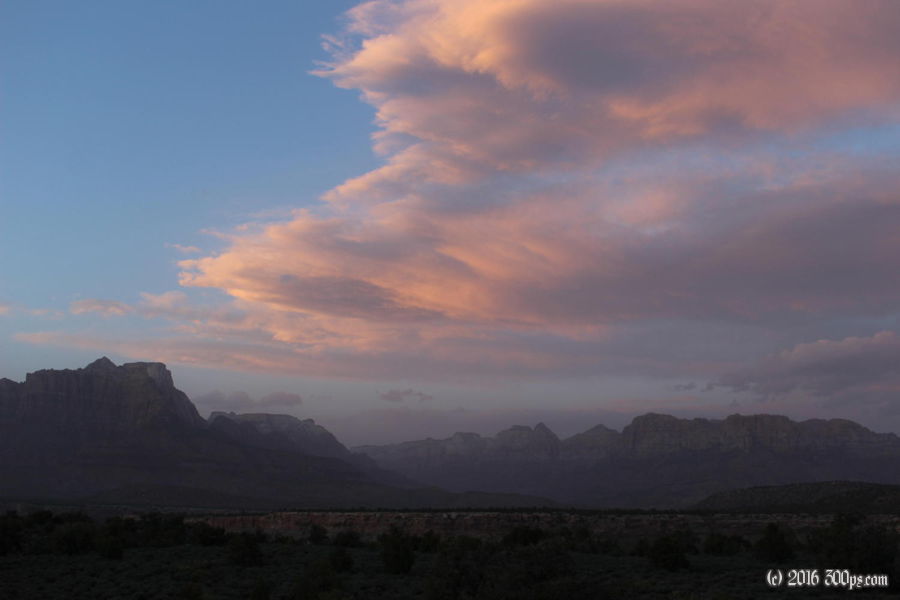 Same deal with the wind today. Some climbing to start as I head towards Zion. At the top of the first set of climbs I run into Randy Houk of Nothing Better to Do. He has some interesting gear: a full set of panniers plus a trailer with a solar panel strapped on top for charging his gadgets. I've been wondering if I should do something similar... We talk touring for a few minutes, he's been on the road for about the same time as me, just a few weeks longer. Next I've got a big downhill to Something Junction where I will turn off for Zion.

I am still a little unclear on the tunnel situation getting into Zion, so when I see three loaded bikes parked outside of a restaurant in Something Junction I go in to see if they've already done Zion. They are three guys from Arizona out on a six day trip. I end up staying for half an hour trading touring stories, they've done some long trips themselves, we have some good laughs. They say there are two tunnels: the first is short and easily ridden, the second is long and bikes are forbidden. They had no problems getting through by hitchhiking.

I climb up to the entrance, the wind hitting me hard in the face as it has most of the day. At the entrance I pay my 12 dollar fee. The ranger notifies me of the tunnel and says a group of cyclists road through the tunnel in February with no lights, two crashed into each other, sending one into the wall and he ended up with brain damage. I wonder if he's just trying to scare me.

I ride through a series of canyons, mesas, buttes,...general all-around Utahian cool rock formations. Then I reach the tunnel. There's a guard there, he reiterates the hitchhiking scenario. I hitch for about 15 minutes then get a ride from a guy named Bill who manages a tour company based in Springdale. As we are waiting to get into the tunnel we see some big-horned sheep climbing on the slopes above.

We get to talking and I forget to even ask to be dropped off. He confirms the cyclist with brain damage tunnel story. The topic of Mormon culture comes up. My great-grandparents were actually Mormons, my grandfather was one of 13 children who grew up on a ranch in Wyoming, but the children all repudiated the church so not much information was passed down about Mormon life. I do know that missionaries periodically visited my grandfather over the course of his life, even though he had moved to the east coast, unsuccessfully trying to bring him back into the fold.

We go by the campgrounds: both are full. He offers to give me a ride to some BLM land where he knows there is free camping. Sounds good. He drops me off on top of a mesa with spectacular views of the surrounding mountains and valley. I ride to the end of the road where I find someone already camping. He says he had 60-70mph winds last night... yikes. The wind is strong right now but hopefully I'm not in for anything like that tonight. At any rate he is camped right at the end of the mesa, the best view around up here I'm sure but also the most exposed. I double back to find a spot on the eastern side of the mesa that has more cover. I make a big fire and hang out in front of it until after midnight knowing that I'm only going to ride back down to the campgrounds tomorrow. The wind dies down quite a bit around 9pm to make for a pleasant evening under the moon and stars.