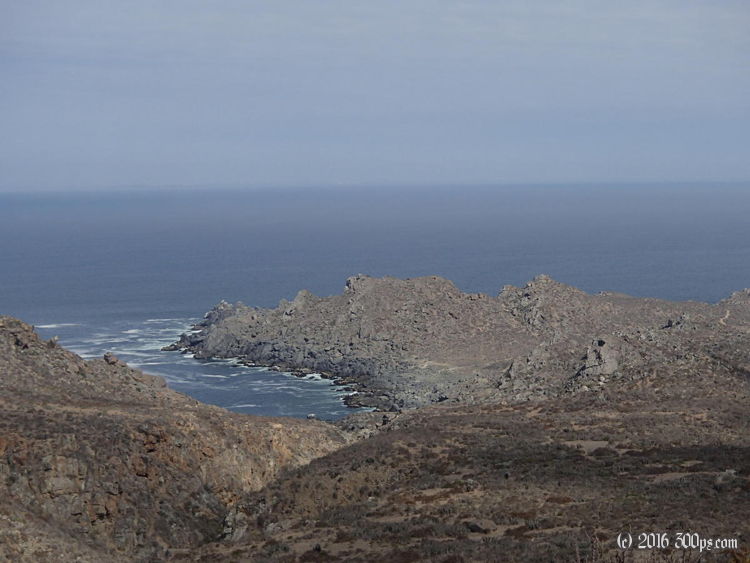 I ate the last few plums and cookies I had, not much of a breakfast, then I set off in search of food. For the next 20 kilometers there was nothing along the coast except for signs saying waterfront lots for sale with the occasional sales office. It seems that the entire coast is for sale, although apparently no one is buying because I didn't see a single real development on the whole stretch. From the billboards you would think it was Cancún... which it hardly is, the beaches are rocky and from what I've seen of the Pacific coast in Chile there is lots of fog.

I finally found breakfast in a place called los Hornos: cheese omelet, bread, and coffee. After los Hornos there is a long (about 10k) climb up over the mountains and away from the coast. The grades were not difficult. Lots of people beeping and waving. The truck traffic was heavy and stayed that way all day. The farther I got from the coast the hotter it became; when I started the descent into the next valley it was really frying. I'm burning through the sunblock now.

I continued until Traphiche where I stopped because I needed water. The map looked devoid of towns after this one so I figured I had better water up. I met two young Finnish girls hitch-hiking at a bus stop. They had been dropped off there by a truck driver and told that another truck would come and pick them up in two hours... or so they thought, they don't speak a word of Spanish between them so they weren't too sure about what they had been told. They are planning on hitch-hiking all the way to Toronto, Canada... my paternal instinct was worried for them.

I headed off to find water. There was one store in town but it was still closed for siesta. While I was waiting a guy pulled up in a car with his family to go to the store as well. He told me he had done a long bicycle trip years ago from Valparaíso, Chile through Argentina to Paraguay then down to Uruguay. I hope he was telling me the truth but I don't know, some of the stuff he said was really far-fetched. The store opened, I got some food and filled up the water bottles (4 liters plus a 1.5 liter bottle of Orange Crush, I figured that would get me the 100k to Vallenar). I passed the same bus stop where I met the Finnish girls on the way out of town but they were gone. I guess they decided not to wait the two hours for that truck... probably a good idea. At any rate I doubt 2 young European girls would have trouble getting rides.

I saw a restaurant 5 kms later and stopped thinking I would get a snack. The owner talked me into a full lunch: a huge plate of chicken and rice, salad, potato salad, bread, and orange juice for 8 dollars. Man it was good. I hadn't eaten enough because of the heat. He said I could take a shower but I passed as it was so hot I would be dirty again in a half hour. When I was leaving the owner and two other guys hanging out there shook my hand and said god bless you. Back on the road people where beeping and waving like crazy. There is a direct correlation between how many beeps and waves I get with people's perception of how difficult the road is. Yes it is desert; hot and sunny with climbing, but so far this road really hasn't been that tough. The wind has been mostly in my favor which makes all the difference. The most difficult part about it has been staying out of the way of all the trucks.

I stopped for a moment to get some shade next to a chapel in Incahuasi. A motorcycle stopped and I talked to the driver for a bit. He told me there was a good climb coming up. I rode for another couple of kilometers until I saw a big gravel pit and decided to call it a day. As I was setting up I saw a small fox, a rare sighting of wild animal that's not a bird on this trip, but I couldn't get a picture because he took off at full speed when he realized I was there. I hope I'm not near his den, I don't want to be dealing with him in the middle of the night.

I will be drinking lots of water tonight. It was a sneaky-big climbing day, over 1500 meters, and with the heat and dry air I think I let myself get dehydrated.