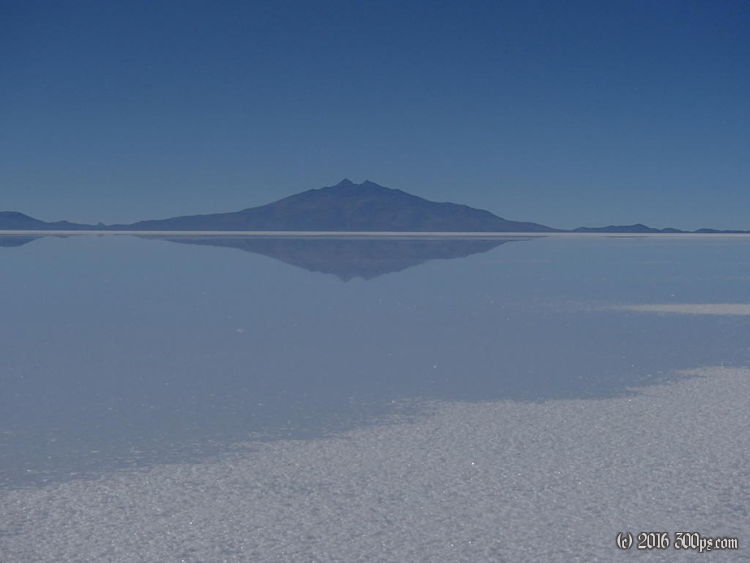 I was up well before dawn to get out of this slightly exposed spot. I carried everything down to the road before realizing the front tire was almost flat. When I went to pump it up the pump wasn´t working. Sand got into the tube again. I cleaned it out, reset the o-ring, and was able to pump up the tire.

When I was making breakfast I decided that I wasn´t going to ride the salar because I wasn´t prepared enough: I had a bad map with no detail, no gps, and no information on the whether the salar was still flooded. By the time I got the bike loaded and was on the road I changed my mind. It looked too enticing so I decided to just go for it. I rode the first 10k on a mix of sand and salt, freezing cold at -6 degrees, before I got to the full salar. The beginning of the salt was thick and unrideable; I almost turned around and headed back towards Sabaya. Good thing I didn´t or I would have missed an unforgettable ride. After half a kilometer the salt firmed up and I was able to continue at a decent speed.

The scenery is hard to describe, it made me think of that "shell program" in the Matrix movie where they suddenly appear in an empty all-white space with no sound. The white salt stretched out indefinitely on my left and in front of me as I rode along. I just headed south, navigating by the position of the sun. The salt periodically changed consistency from hard and bumpy to soft slush to hard with a thin layer of water to a mix of sand and salt. The wet portions were unavoidable, when I went through them salt started to cake up on all the parts of the bicycle and the bags. This will not be good for the components... although the fact that I´m mostly aluminum will actually be a benefit for this situation.

I rode 65 kilometers with 8 meters of climbing, about as flat as you can get, until I was within a couple of kilometers of the southern shore. Then the salt suddenly turned to soft mud. Impossible to ride on it. I ended up pushing and dragging the bike for 4 kilometers before I found a well-defined vehicle path heading west. This was exactly the situation I had feared, that I would get bogged down and run low on water. Since I had already covered so much distance and still had lots of daylight I wasn´t too worried about it though. When that vehicle track appeared I just jumped on it and headed west. I didn´t know how to get off the salar but figured these vehicles had to be going somewhere... and sure enough after another 20 kilometers or so I was off the salar and heading southwest through some volcanoes. I passed a small village where it looked like the primary activity is growing some kind of legume in the sand. I had never seen this plant before, I´ll have to look it up to see what it is. It didn´t smell or taste like anything I´ve seen before.

I saw my first human around 3pm. He was driving in my direction and I flagged him down to ask if this road would take me to Llica. He said yes, then proceeded to curse the sand and washboard. He spoke Spanish like Yoda, putting all the verbs at the end of his sentences. My experience with Bolivian Spanish just started yesterday so I don´t know if this is normal or if he was just a Star Wars fan. At any rate I could identify with his distaste for sand and washboard. This road was nasty, probably the worst one I´ve had to ride on this trip. The washboard continuously bounced me up and down while the sand was so thick in places I had to get off and walk. The wheels just wouldn´t spin on this stuff, impossible to ride through it.

I struggled along, passing a few small villages, and began to think about camping because I had no idea how far away Llica was since it is not on my map. Eventually it just appeared. I was almost completely out of water when I arrived. First thing was to stock up on liquids. There are a bunch of small stores in the town, it is a pretty big place compared to what I´ve seen over the last week, probably the biggest town since Arica, although completely unlike that modern city. This place is distinctly Bolivian with colorfully dressed old women selling all kinds of things on the street, trash everywhere, decrepit vehicles driving too fast down the dusty streets, and everyone staring at me as if I were an alien.

The owner of the store where I bought my water was cool, he asked me about my trip and couldn´t believe that I had ridden all the way from near Sabaya to Llica in one day. I can´t believe it either, I was completely knackered. Having to drag the bike for those 4 kilometers was a killer.

I made my way out of town through an army checkpoint. At this point it was getting close to nightfall so I just rode a few kilometers out of town on to the salar and set up camp. I was too tired to care if I´m exposed. At any rate anything that is land in this area is covered with coral rock which would have destroyed the tent so the best option was the salar. It will be cold tonight I´m sure...

Today was an amazing ride on that salt flat, one of the highlights of the trip so far. Incredible scenery.