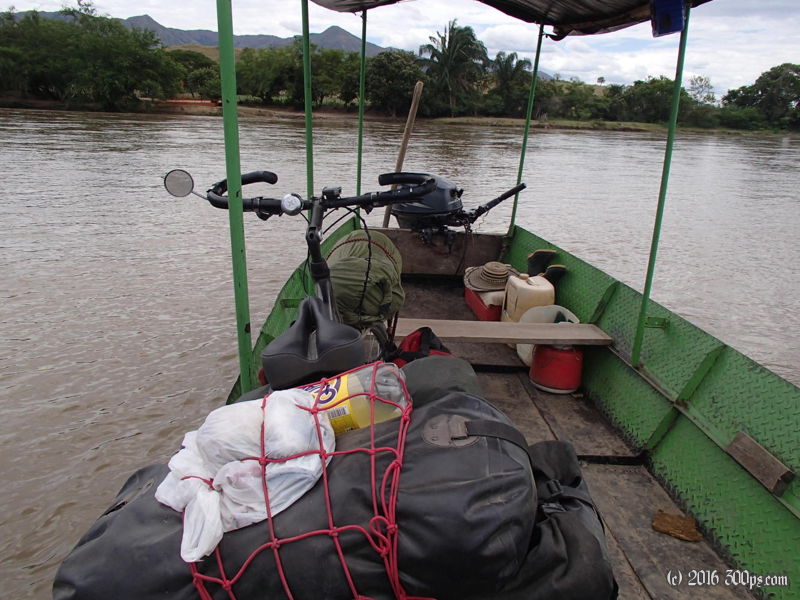 Up early to break down and find some breakfast before the desert sun starting frying us. It was about 7k back up the road to one of the estaderos/restaurants where we had a good feed. I talked to a couple of the guys working there about how to cut down to La Victoria but they gave me conflicting information about whether it was possible so in the end we opted to backtrack all the way to Villvieja before taking the road to La Victoria. I just wasn't up for getting lost in the hot desert again.

The temperature just kept going up until we got to the river crossing where a religious gentleman ferried us and the bikes across in a small motor boat. He kept saying "God bless you" over and over. Once across the river we got back on the highway and cruised for a while until we stopped at a restaurant for lunch. I spent a while talking to a truck driver about our route, he had a few suggestions for avoiding dangerous places. He showed me a picture of his bicycle on his cellphone: a 1930's model Raleigh. They are into bicycles in Colombia.

We rolled into a truck-stop town called Castilla as daylight was running out. I asked the attendant if we could set up camp in the lot behind the station and he gave us the green light. A short while later Phil's legs completely seized up with cramps from dehydration. The station attendant went to a nearby restaurant to get him some salt while I tracked down a drugstore to buy "suero" (not sure what it's called in English, it's a re-hydration drink that doctors here usually prescribe when you get diarrhea). It was all the pharmacist could offer, he said there was no doctor in town so if Phil had needed an IV we would have had to go 45 kilometers to Espinal. Fortunately with the suero and lots of liquids he recovered nicely. A bit of a scare... The woman who managed the station was kind enough to supply ice packs and some jokes to lighten the mood.