Canal Lauca to Salar de Surire: Ripio and wind ride that unexpectedly ended in a bed 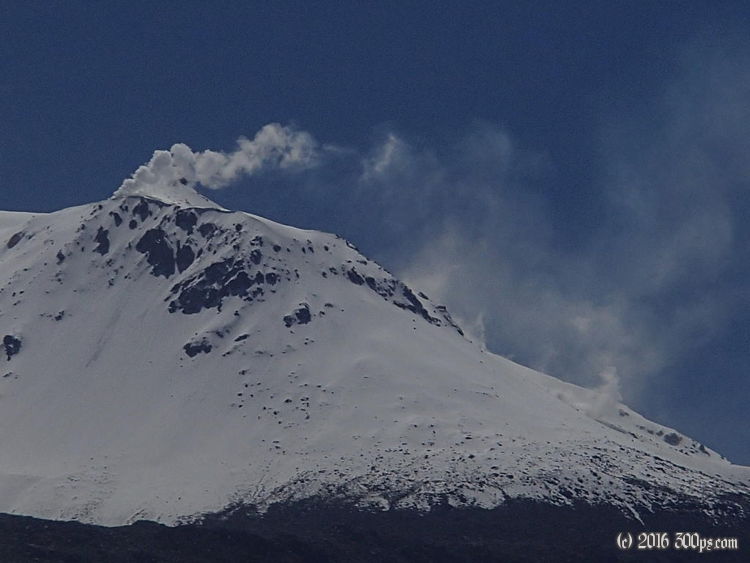 It was -1 in the tent when I got up at 7. The water bottles on the bike were frozen solid. The good news was that there was hardly any wind, it would have been really tough to get going if it had been blowing like last night with these temperatures.I was fully decked out when I hit the road: thermal underwear, shorts, rain gear pants, long wool socks, long sleeve t-shirt, short sleeve t-shirt, fleece jacket, heavy jacket, gloves with liners, neck warmer, bandana, and hat. I needed it all until about 10 when it finally started to warm up.

The road was more of the same from yesterday: sandy ripio winding up and down small valleys. I stopped at the carabineros station in Guallatiri for water and a chat with a couple of bored officers. This town seems to be mostly abandoned other than the carabineros, a ranger station for the park, and a couple of alpaca herders.

The road descends from Guallatiri along a beautiful river canyon. The road was washed out in a few places, I got my feet wet trying to get the bike across. Around 1pm the winds started to pick up, which coincided with a deterioration in the quality of the road. The sand was too thick to ride in many places. It all added up to a slow afternoon. When I finally reached the last peak before descending into the valley of the Salar Surire the headwinds had reached vicious proportions. I was already exhausted from the day´s ride at high altitude so I frankly don´t know how I rode the last 10 kilometers into that headwind to the ranger station refugio. I was running on will power alone.

A few kilometers from the refugio a ranger in a Bronco stopped to tell me that a couple was already staying there but there was space for me as well and that he would be back at 8:30 tomorrow morning.

When I finally made it to the refugio I met Elisa and Sebastian, two Germans from Heidelberg who have been travelling in South America for 3-odd months doing mostly hiking in the mountains. The refugio is nice, it has a modern kitchen, a wood-burning stove, hot water, and electricity. We got a fire burning in the stove and I made dinner while we talked about our travels.

I´m exhausted but happy to be in a bed for the night out of the cold. I expected to be camping until Pisiga so it was a welcome development.