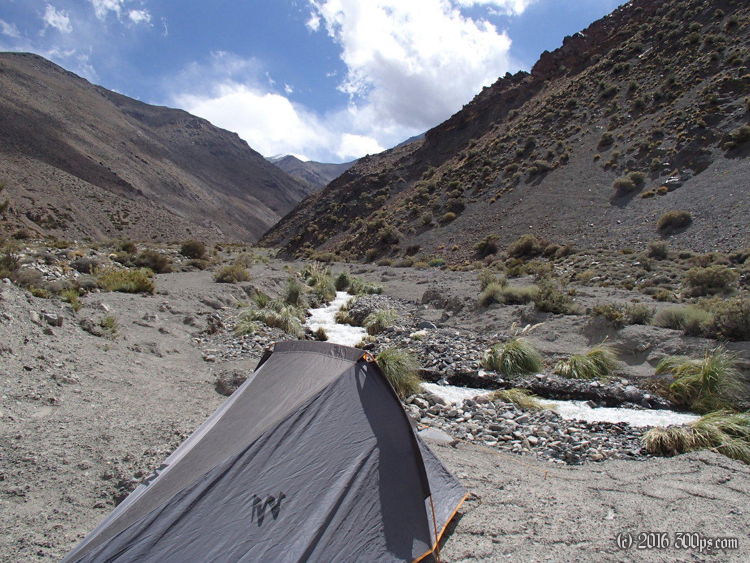 The wind died last night very suddenly. Wind is such an omnipresent force in the pampa that when there is none it seems bizarre. When the wind completely stopped I had the feeling that something ominous was going to happen, as if nature had gone amok.

In the morning there was nothing but a breeze. I headed into Las Flores for a coffee at the gas station. No WiFi at this one. I did the climb back up to the customs office. They checked me through with no problems until the guy who had turned me away last night showed up. This guy definitely has an attitude. He wanted to see my passport even though everything had already been processed. He wanted to know where my Argentine visa was, I showed it to him, then he started complaining that the visa didn't have the cost written on it. I told him that I had come through Ezeiza and that it was their system, how should I know why they didn't put the cost on it; and if he had a problem with it, he could call them. That shut him up and I was able to continue. The rest of the agents were cool, they wanted to know what kind of tools and spare parts I was carrying.

From the customs office there is a long, slow climb up to the mountains that rises about 700 meters over 25 or so kilometers. At the base of the mountains there is a highway department camp. From then on the grades get steeper, but nothing too strenuous, and it is mostly pavement except for a few stretches of ripio where they have been working on the road. When I got to Guardia Vieja (a gendarmeria checkpoint), the officer took a stamped paper they had given me down below, it just said that I was on a bicycle. He recommended that I camp 5 kilometers up the road where there is a gravel pit and a stream coming down from the mountains. I decided to take his advice as the place was just over 3,000 meters (about 10,000 feet) and I wanted to camp at that level to acclimate to the altitude. There were a few guys working there, they are fixing the damage from the recent rains. They told me they work 11 days on, 3 days off or 14 days on, 7 days off. While they are up here they stay at the highway department camp I passed down at the base of the mountains. They said I could camp in the gravel pit but I don't like camping where I can be seen from the road. I dragged the bike a couple of hundred meters up the stream and found a brilliant spot. It was a lot of extra work but it was worth it.

3,000 meters is where I start noticing the effect of the altitude so I'm glad I can get a full night at this level before continuing on. I drank copious amounts of water to help the process along. It was the second day in a row I had to cut things short though. I still had 3 hours of daylight so I did a bunch of chores: patched my tubes that had leaks, cleaned and lubed the drive train, took a bath in the stream (yes it was freakin' cold), washed my gloves, re-taped part of the handlebar, re-taped the wear points on the luggage racks; and re-organized my money, paperwork, and maps to prepare for Chile. While I was at it I found 200 Argentine pesos I forgot that I had. That put me in a good mood, then dinner and lights out. I had gathered wood for a fire, knowing no one would be up here after dark, but by nightfall I was ready for bed. It will surely be a big climbing day tomorrow.