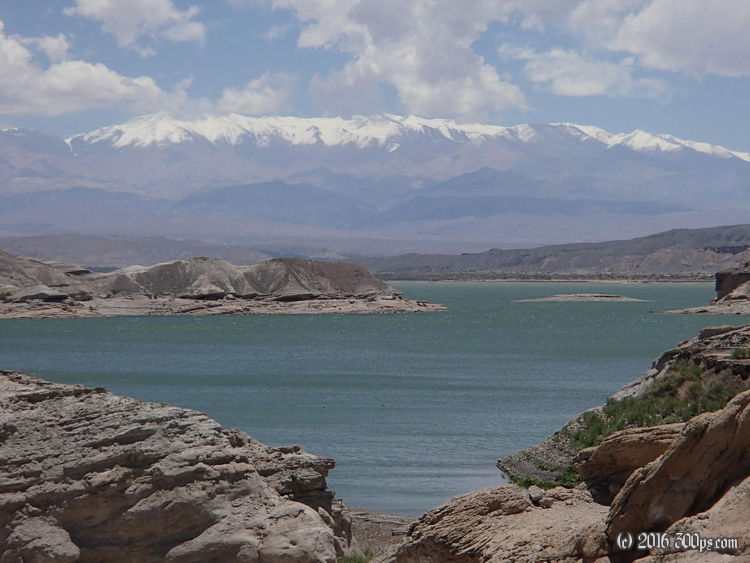 Another band of thunderstorms came through late at night, it made a lot of noise but very little rain. When I had set up camp I was alone but a family showed up late and insisted on talking into the wee hours of the morning. Annoying. I made no effort to be quiet when I broke camp.

I stopped at a store in the morning to get olive oil, the woman working there said that Paso Agua Negra was closed due to all the rain they've been having. She recommended that I check with someone in town before I started riding over there. I went to the highway department, figuring who better to know right? They had no idea. I decided to start riding anyways. Shortly after I left town I ran into Lars, a Swede who is bike touring until May. He started in Mendoza and came up through Barreal. He said the rippio sections were destroyed from the rain. I think he is the first tourer I've seen since the French family back near the Chilean coast; been a long time.

After I left Lars the scenery started. The road follows a river canyon through several valleys. Amazing green colored rock and silver cliffs. There was a fair amount of climbing but I had the wind at my back so it didn't feel too strenous. The road comes out at a fabulous lake with snow-capped mountains in the distance. I had the camera going all day long.

In Rodeo I stopped for something to eat. The restaurant I picked was having problems with their gas supply so lunch consisted of a big sandwich. They were very apologetic but I didn't mind at all; I thought it was quite good. One of the other clients was a man from Rosario working in San Juan on the grape harvest. He said that when they drove past Las Flores they saw cars going up towards the pass. Awesome, it meant the pass was open. They couldn't make coffee because of their gas problem so I went to another place where I had a café solo and an ice cream. The owner said two Dutch guys had come through on Thursday/Friday, at first the pass was closed but then they got out Friday night when it opened. It had then re-closed on Saturday only to open again yesterday.

I headed to Las Flores where the customs border station is. At this point I was up to 2,000 meters, having gained about 800 since I left San José. The gendarme at customs took one look at me then started pointing to his wrist. I guess I was too late. They weren't letting anyone through. I explained to him that it was going to take me two days to get over the pass anyways so it didn't matter if they let me through tonight or tomorrow morning but he wasn't having any of it. I had no choice but to turn around and find a place to camp. I stopped at a gas station where I was mobbed by a group of 6 or 7 motorcyclists from Mar del Plata. They peppered me with questions about my trip. They were heading towards Paso San Francisco, then Iquique in Chile, then back into Argentina via San Pedro de Atacama. They had been on the same road as Lars the cyclist and said it was a nightmare. They had had to unload the motorcycles and push them through various spots. They were all bummed out that they had only done 80 kilometers in 6 hours. Hey that's not bad for me, it's about what I did today!

When they left I rode out through the southern edge of the town and found a camping spot in the punes (pampa dunes). The sunset was stunning. There were threatening clouds in all directions but it made for a great scene when mixed with the setting sun. It's raining a bit now but so far nothing serious. I ate, did all my chores and I'm already in bed at 9:30. I hate to leave daylight on the table but the gendarme left me no choice. I hope to get up there early tomorrow morning to get through the check point and start climbing the pass.