3 kms west of Molinos to 4 kms east of Zapahuira: A looong climb and a personal best 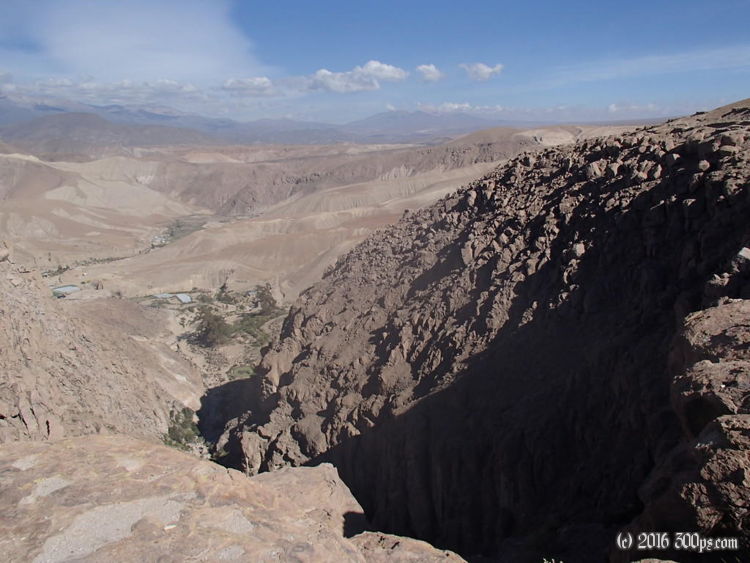 It was a good thing I stopped where I did last night, the day started off with an 800 meter climb up a bunch of switchbacks with nary a spot for camping. The whole day was really just one big climb. After that first big ascent I stopped at the Quiborax mine for water. The security guards looked at me as if I had just landed on a spaceship but they gave me a bunch of bottled water.

This road is truckolandia, they just kept coming and coming all day long. The shoulder reappeared at the beginning of the Cuesta del Águila, another huge climb that I thought would never end. It was hot and sweaty, hardly any wind, and I just kept my head down and banged it out. There was one incident where a car almost killed me. He was coming in the other direction and passed a truck right when the truck was passing me. I had my head down so I didn´t see it coming, I just suddenly saw a car bumper about 6 inches away from my left front pannier. It scared the living crap out of me. I was furious, how could he be that stupid? It took me a good half-hour to calm down after that. I had visions of taking a sledge hammer to his car.

After 50 kilometers I came to a couple of houses by the side of the road, the first man-made structures since the mine. I got some more water here from one of the houses, the guy didn´t look Chileno, I´m not sure where he was from. I had burned through all that water I got from the mine pretty quick. 10 kilometers later I arrived in Zapahuira which is nothing more than a few houses and some roadside restaurants. At one of them I bought a soft drink, some water, and some cookies. By this point I was up near 3,400 meters altitude and I was feeling it. That coupled with the monster day climbing, 2,551 meters (8367,28 feet, a personal best), I was dead tired. I made it another 4 kilometers out of town and just plopped the tent down on the flattest place I could find. There is no cover from the road up here unless you want to sleep on a 15 percent slope. It was dark soon so at least no could see me unless they really looked.

It´s chilly up here once the sun goes down. Hopefully I can get a good night´s sleep despite the altitude. Tomorrow I´ll be heading through Putre, maybe I will stop there on a short day so I can get organized for the mountains, we´ll see.