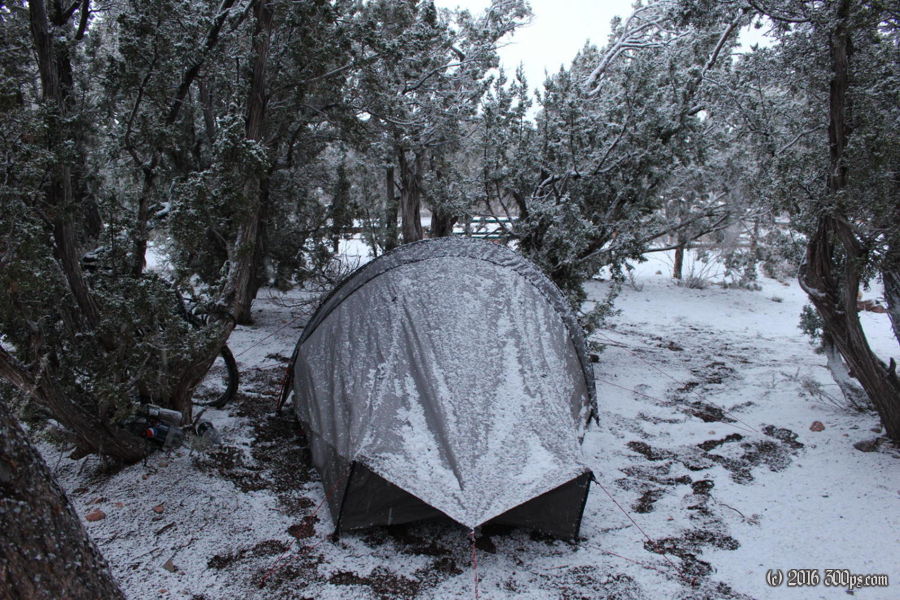 I wake up at dawn but I don’t get out of bed until 8. Then it’s breakfast, pack up, and go get water for the day. I take a spin around the center of Kingman to check out what’s left of the 50’s Main Street ambience, then I fly out of town at 25 mph on a ripping southwest wind. On through a big valley to the next mountain range. The wind is capricious today (it’s a rare day that it isn’t), sometimes it turns on me and slows me to a crawl. It is quite chilly and I am dreading the arrival of the rain showers I can see off in the distance.

I stop in Hackberry to check out the general store which is full of, and surrounded by, Route 66 memorabilia. All the patrons are foreigners: German, French, and French Canadian. I’m feeling grumpy about the conditions so I don’t talk to anybody. A few miles later I meet Heinz, a German –speaking Italian from Südtirol who is travelling from Miami to San Diego by bicycle. We talk for quite a while about cycling, routes, our respective trips. Although he hasn’t done a blog there he is familiar with CGOAB having once done a trip in SE Asia with a person who blogged about it. We trade pictures and I leave him with my card.

The wind turns against me a few miles down the road and the temperature takes a dive… and, what’s that falling, snow? Are you kidding me? The last thing I expected today, it’s only in the mid-40’s. Now I’m worried that I’m in for a really shitty afternoon. I enter the Hualapai Indian Reservation. I have to stop at a gas station to let a snow squall pass but the sky brightens afterwards. In Peach Tree, an Indian town, I pick up a can of beans at the store. The cashier/owner tells me she is shutting the place in a month due to a dispute with the tribal council. Too bad, nice lady and I’m sure the community needs the store. There is a resort sort of thing that has the smell of money so I don’t check about a room.

On a long climb after town it really starts to snow. The temperature has now dropped to freezing and it’s only 5 o’clock…I know I’m in for a cold night. This is cattle country so the road is fenced up tight. I want to camp but I wait until I get out of the reservation before taking a serious look. I keep going for 5 miles but there are no breaks in the fence, the snow is getting fiercer now so I’m about to find a place to lift all my gear over the fence when I see a motel off in the distance. I pull in and ask about a room to the astonished employee who can’t believe I’m out riding a bike in this weather. 96 dollars she says. Not on your life. I see a sign for an RV park pointing behind the motel so I ask about camping. Yes there’s tent camping for 10 bucks plus tax… that’s more like it. She doesn’t believe me when I say I want to camp. Are you sure? On that thing? Yup. I talk to a guy in the parking lot who is checking into the motel. He says he is from New Mexico but he speaks Spanish like a chilango. He comes out with the díos míos when he finds out I’m on a bicycle.

The campground actually turns out to be really nice; the tent spots are nestled among the trees and have fire pits and picnic tables. There are a few RV’s parked a ways away but I don’t see anyone. I drop the bike and go looking for wood. I get all dirty in the process from the red clay that has turned into a wretched mud with the snow but I find what I’m looking for. I set up the tent under the trees for maximum cover and make dinner while it snows. When I get out to wash the pots I discover that the bathrooms have showers, a heater, and electrical outlets. Things are looking up! I make a fire and boil water for coffee on it. The fire makes it all ok, makes the struggle today worthwhile, makes the snow seem like just another fun adventure. I shouldn’t get too cocky though, it’s already down into the mid-20’s and sure to get colder overnight. All the heavy artillery comes out: the ski jacket, the winter hat, the neck warmer, the long underwear. I’ve been looking at this stuff since Guadalajara with resentment at the space and weight it takes up on the bike, but tonight I’m grateful that I didn’t ditch any of it in a moment of weakness.

A coyote wails in the distance as I enjoy my fire right down to the very last twig. Route 66 is alright in my book.