Pta. Balasto to Cafayate: Made it to Salta province at last 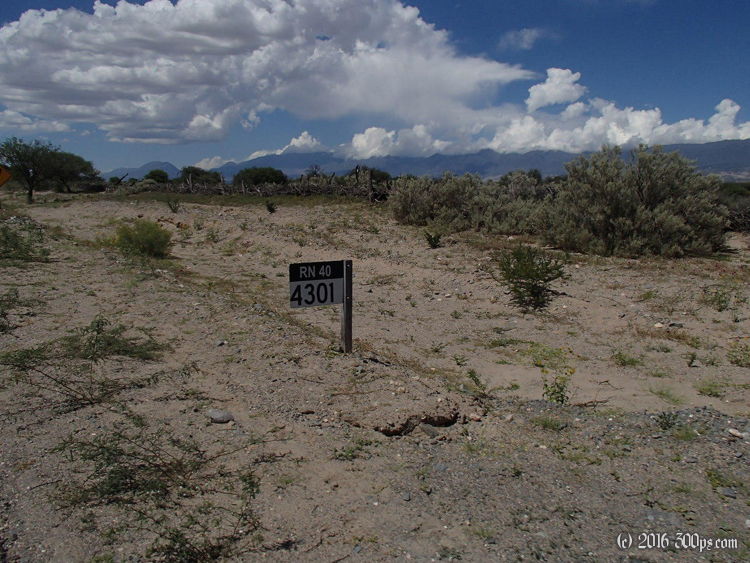 Lots of noises last night: dogs barking, mules braying, horses whinnying, 2-cycle motorcycles cruising the main road... the price you pay for civilization. It was worth the shower and shave. The campground owner let me name my own price when I went to pay; that's a first. Really nice people, I wish them luck on their plans for a new house and restaurant on the campground.

The first town of the day was San José. I didn't find too much there, everyone seemed to be at church, so I continued on to Santa María. It's a pretty good-sized town, I went for a café with croissants on the main square, then a trip to the vegetable stand and the supermarket.

The rest of the day entailed following the valley north, across many washes flowing over the road. Towards the end of the day the landscaped changed from all desert to desert with vineyards. I've been riding through poor, dusty towns since I came down from the mountains over a week ago so the change in architecture and infrastructure that accompanied the arrival of the vineyards was striking. Everything here smells of money... it could have been the Loire or Nappa Valley. From here on Ruta 40 took on the incongruous name of "Ruta del Vino". It's Ruta 40, the queen of the pampa, not the wine road!

The headwinds really picked up after 5 and I crawled into Cafayate. It's a totally different scene here, much more akin to Bariloche with tourists, campgrounds, and hotels than the wind-swept towns of La Rioja and Catamarca. I was originally planning on getting a site in a campground but they looked packed and I knew it would be near impossible to get a night's sleep in a packed Argentine campground. Riding through town I saw a hostel and got a bed. I made dinner then spent the rest of the evening working on the bike. I broke a spoke on the rear wheel at some point in the last few days. I was missing one tool to get the cassette off, I'm carrying a chain whip that has a socket for the cassette key on one side but it obviously can't hold the cassette and turn the key at the same time... I ended up using my spare chain to hold the cassette while I stood on it, then used the wrench on the chain whip to loosen the cassette lock. I replaced the spoke and it looks pretty good, I'll have to true the wheel tomorrow. The whole time I was working I talked to Siobahn (spelling?) from Ireland who is doing an around-the-world trip. She started in Central America and will so soon be heading to Australia then Asia.

The hostel is hopping, the guitars are out, hopefully there will be some sleep to come...

No flats today! Nice to be riding on brand new tires.