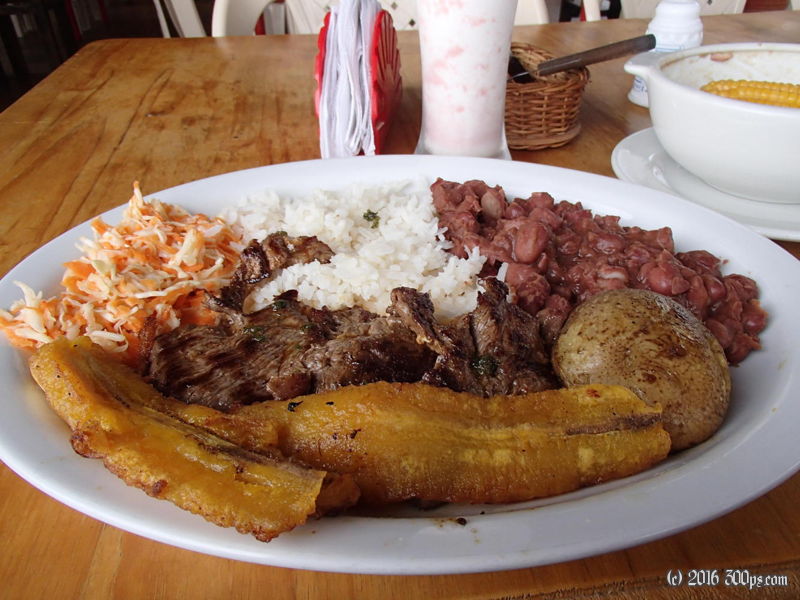 I had trouble getting out of the hotel this morning because the receptionist and the security guard wanted to know all about my trip. A nice problem to have. After detaching myself I went for breakfast down the street, the conversation went like this:

I calculate that 66% of the words that came out of her mouth were diminutives. I was half expecting a breakfast made for a midget, but it actually turned out to be quite good and quite big. Afterwards a mechanic from across the street joined me for a coffee, he filled me in on the details of the road to Manizales, sounds like I'm in for some climbing. I should keep track of how many strangers I talk to in a day while I'm traveling in Colombia. I think they are the friendliest people I have ever met.

There was plenty of climbing but I took it slow knowing I only wanted to get to Manizales. I stopped at another one of those "Autopista del Café" rest stops and got a coffee, free this time. The girls working there oohed and ahhed at the luggage on my bike. At another stop further down the road I spoke to a doctor who gave me some tips for getting boats to Panama. It was thundering all morning but always in the distance until it finally caught up to me in the early afternoon. I stopped for lunch to get out of the rain. I was served a massive meal of soup, a banana, frijoles, grilled meat, salad, fried banana, rice, potato, and a delicious guyaba milkshake; all for 4 dollars.

When I went to leave I discovered that the back tire was flat. I didn't feel like dealing with it so I just pumped it up to see how long it would hold. I would pump it up 3 more times before I reached my final destination. More climbing with slight rain then a descent past Manizales down to a river, then more climbing up to Villamaria. I planned to stay there for the night in order to set myself up for a ride into the Los Nevados national park tomorrow. As I was walking around looking for a place to stay a woman noticed my tire going flat and asked me if I had a spare tube and pump. I said yes I was all set and asked her about hotels, she hooked me up with one a few blocks away. The place is called Hostal San Miguel on Carrera 5, not particularly cheap but a nice place with nice owners. They told me that there are two young Americans staying there as well but I didn't get a chance to talk to them. I found the flat culprit: a little piece of wire embedded in the tire.

I bought food for two days anticipating that there won't be much available up in the mountains of the national park. Looking forward to some isolated mountain riding starting tomorrow.