Puerto Triunfo to some paradero: 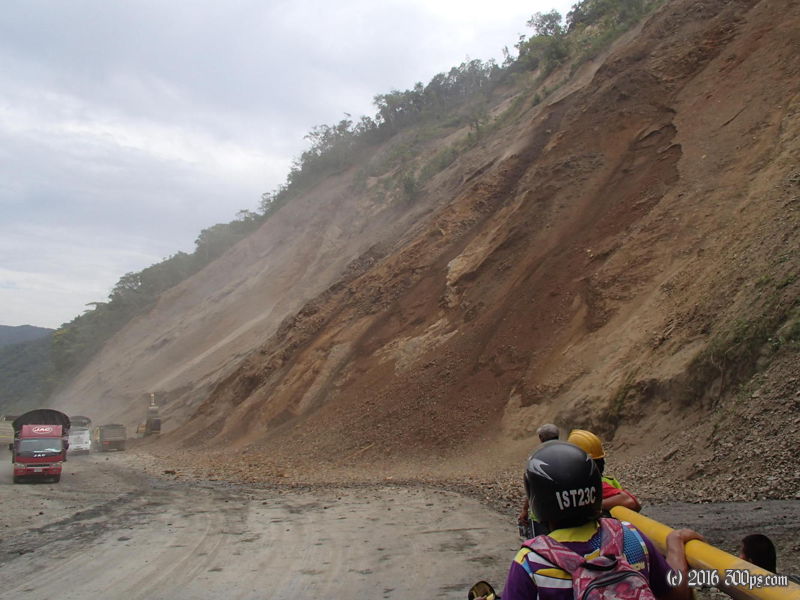 Everything was soaked in the morning but at least it wasn't raining. We rode back into Puerto Triunfo to have breakfast at a café owned by a nice woman who couldn't believe we had ridden there all the way from Argentina. The flat was over today - lots of climbing on a roller coaster road. We kept losing all the altitude we gained so I was starting to wonder what the final climb would look like, Ignacio had told us we get up over 2,000 meters at some point but we kept dropping down to 6 or 7 hundred.

Towards the end of the day we ran into a long line of vehicles waiting for a road crew to clear a rockslide. I got through after a few minutes, it was a good thing we got past it because it would block the road starting at 5am the next day when a torrential rainfall brought down the hillside. We climbed some more after the turnoff for San Luis then decided to stop at a paradero (roadside rest stop with restaurant) at the bottom of the next hill. They had WiFi and were amenable to us camping there so it seemed a good place to stop given that wild camping would be tough on this cliff road.

We had an expensive and not very good dinner at the restaurant then set up the tents next to the employee dorms. I had a shower which really hit the spot in spite of the lack of hot water. It was so hot out it didn't matter. I spent a while talking to the maintenance guy, a nice older gentleman who said he had 4 kids in New Jersey that he hadn't seen in 30 years because his wife left him and moved the rest of the family to the States. He showed us how to peal and eat a fruit I had never tried before (forgotten the name already), but it was tasty.