3 kms north of El Sauzal, Mexico to San Ysidro, California: Don't kick me off the cuota, hermano/ Back in the US of A 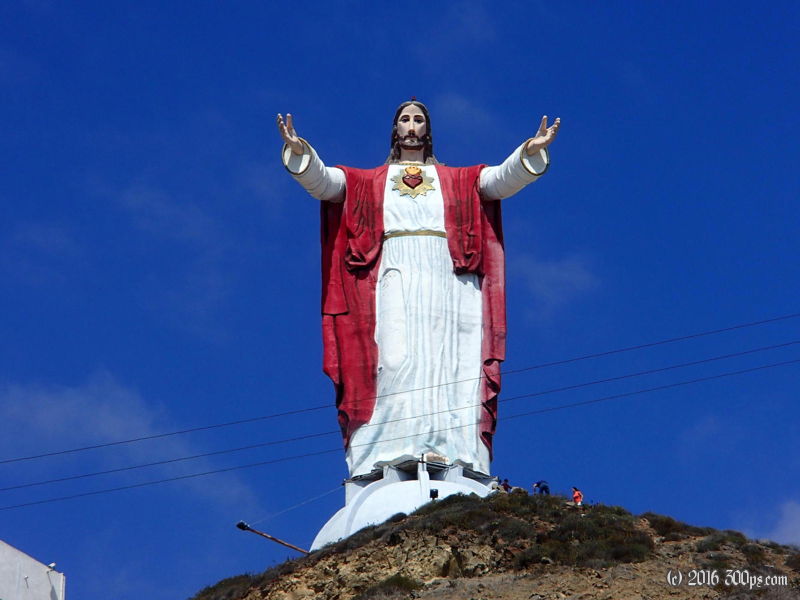 Last night some kids showed up at the beach in pickup trucks blasting banda music. I hung in there for 15 minutes until I realized that there was no way I could sleep with that going on, even with earplugs, so I got out of the tent and went over to ask them to turn in down. They were kind enough to pack up and move farther down the beach, after that I was able to go right to sleep.

Yesterday I noticed that there was hardly any traffic on the bridge to the cuota that I could see from the beach, today I find out why: the road is blocked due to some kind of political action. I ride up to the toll booth hoping that I can slip by but a woman comes out and says no dice. I spend a few minutes trying to talk her into letting me go but then a security guard comes over and confirms that I can't continue. This means I have to use the libre that goes up through the mountains, which means no shoulder and lots of traffic, even more so now that the cuota is closed. On my way up to the exit I meet a guy named Alejandro who teaches surfing in Los Cabos. We chat for 15 minutes about the Baja, about my trip, and about the business he has making surfboards.

The libre through the mountains is just as I thought it would be: ridiculously fucking dangerous. I have a few really close calls with trucks and cars passing in the other direction. At Misiones I stop for a tamal and am grateful for the chance to get back on the cuota with its nice big shoulder. Everything is going along swimmingly until I get close to Rosarita where a security guard from one of the exit tolls flags me down to tell me I had better get off because they are not going to let me through the toll booth that is coming up. I find a hole in the fence to get down onto the libre. It's not so bad going through the town but on the other side I hop back on the cuota. This time I make almost the whole way to Tijuana before another security guard stops me and says I have to get off. Really cool guy, we end up talking for 15 minutes before he shows me how to get the bike down into a place called Tijuana Playa. I follow the coast until I come to a corner where there is a big wall, with another big fence 30 meters farther up the beach. It takes me a minute to realize that this is the end of Mexico, those walls are for the border. I can see San Diego off in the distance but I'm going to have to head east in order to cross over.

I get totally confused trying to find where to cross, there are a whole series of highway interchanges with signs pointing this way and that, eventually I ask a Federale and he gives me directions to get to the pedestrian crossing. I wait in line with my bike. It feels surreal standing there waiting to get into my home country... I don't feel American at all, sometimes I wonder: was there a mistake somewhere? Is this really my country? When it's finally my turn the border agent looks at me in disbelief when I tell him I've ridden here from Argentina. He's cool though, just asks me a couple of questions then lets me in. I have to take all the bags off the bike, run them through the X-Ray machine, then I'm out into the US of A. It's just about dark so I find a cheap motel and go looking for food. At a Mexican fast food place I ask for a huarache, the girl asks me what kind, I say carne asada, she smiles at me and we switch to Spanish. I guess I'm not completely out of Latin America...