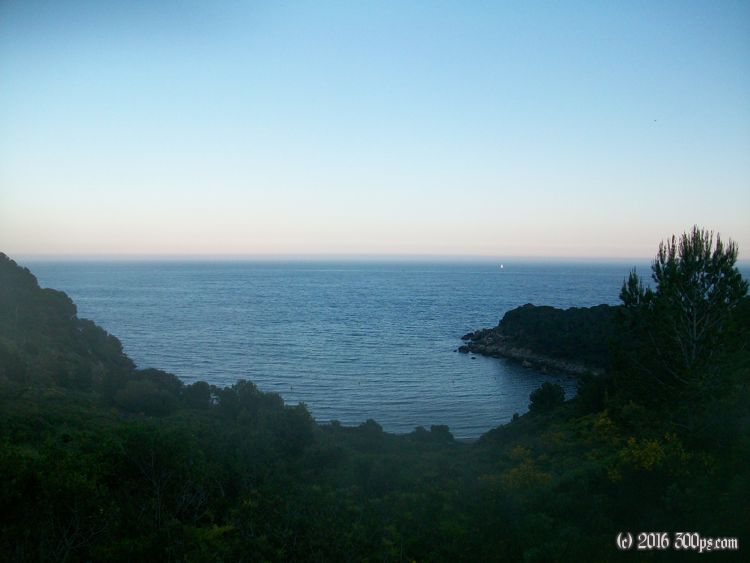 Last night some kind of rodent, I think maybe a marmot, was creeping around my campsite. I had put my food bag up in a tree and he kept coming back to sniff around, even after me getting out the tent and chasing him away a few times. One of the downsides (and charms) of camping.

Straight away I've got a big climb before dropping down into Banyuls-sur-mer, the last French town before the Spanish border. The border itself is anticlimactic, having long ago closed due to the Schengen open-border agreement. Just a sign welcoming to Spain (which someone has crossed out with spray paint and written Catalunya). Pretty much every sign in Catalunya that's in Spanish has been crossed out and replaced with Catalan.

I follow the coast south. The hills are not particularly big but the grades are sharp. On this first day in Spain, I am struck by the cultural differences between the countries I've visited on this trip. In Germany I cycled for weeks without having any meaningful contact with people. In France things got friendlier and friendlier the farther south I got. Now in Spain people are beeping encouragement and waving as I climb the hills on my bike. People actually say hello (or adeu!) as I pass. It feels like I'm on a different planet than Germany's.

Late in the day I make it to Cadaquès, a picturesque town on the Mediterranean surrounded by a national park.

I get offroad on the dirt and rock paths that continue to Cap Norfeu. For a while I ride with a local guy on a mountain bike who tells me I can probably camp down in one of the coves. As the sun is setting I find a nice flat spot overlooking a small cove and set up the tent, grateful to have bought it because without camping gear I would not have been able to discover such spots.