A few days off in Salta: New components for the bike 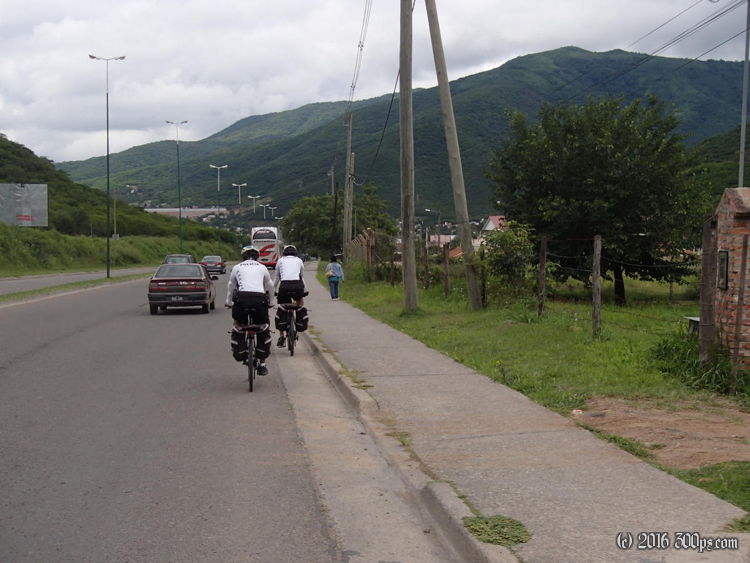 I had a ton of things to do to keep roadworthy. First thing was to pick up the package I had sent to myself from Buenos Aires. It was there at the bus station, much to my surprise, and they didn't even charge me anything for the fact that it has been sitting there for almost 3 months. I had sent to someone who didn't pick it up so I got lucky having no problems getting it. It felt like Christmas, I had filled it with stuff I brought from Barcelona: 4 tubes, a Schwalbe Marathon, a new cassette, new chain, brake pads, a couple of shirts, sunscreen, a pair of jeans, and bandanas.

Next I was off to look for a rack. I went to 7 bike shops: 3 were low-end kinds of places keeping the local commuters afloat which left 4 that had decent components, 2 of them were closed for vacation. Of the two shops left all I could find was... drumroll... the exact same model that I have now. Shit. Well as they say, "es lo que hay" (it's what's available). I bought it.

Then I dropped off my laundry. I feel bad for these people that have to sift through my rancid cycling clothes. To their credit they never complain.

On my way running around town two guys stopped me to ask where my bike came from. Bikes this size with 700c wheels are a rarity in South America. It turns out they were two cops from the bicycle patrol division of Salta, one of them is the commander. They told me all about their force and their plans for getting more people cycling in Salta. There are currently working on an event where a couple of hundred cyclists ride from Salta down to Cafayate through that river canyon I did the other day. They were all excited about it. They invited me to go visit their station and offered the services of their mechanic. I told them about my trip and wished them luck in their endeavors.

Back at the hostel I pulled off the broken rack and installed the new one. I put the same brace I had on the left side onto the new rack to try and reinforce it, on the right side a came up with a new brace using a bracket for a reflector that I had taken off in Buenos Aires and thankfully mailed up here in the package. I hope this setup holds for a while. Well the old rack lasted a couple thousand kilometers before breaking... I also trued the back wheel and put on the new Schwalbe Marathon. I refolded the Dureme to use as a spare, since it takes up the least amount of space in the luggage I will use it last.

After all that I was knackered so I went to sleep after making dinner and chatting with the owner of the hostel for a while.

The next day I rode out to the bicycle police station. The two guys I met yesterday weren't there so I didn't stay too long, just talked to a couple of female officers who were coming back to change shifts. There are a whole bunch of them, there must have been 30, 15 coming off shift and 15 going on. When I left I rode up one of the hills to get a good look at the city. It's a nice town, it has a good feel to it.

I changed the last of my euros for 1 to 9, at that rate Argentina is downright cheap. I had been avoiding the money changers on the street but they have the best rates and the owner of the hostel said not to worry about counterfeit bills from people on this particular street corner. I had a nervous moment when I spent the first few 100s but no one screamed fake...

Back at the hostel I replaced the rear brake pads, swapped out the cassette for the new one, and changed the chain. This cassette has a 34 tooth gear, I've never used one but I'm guessing it will come in handy in the mountains. The chain is a Shimano with one of those quick links. It was my first time installing one of these and I have to say it doesn't give me a warm fuzzy feeling the way it goes on. I prefer the reinforced pin system, it seems much sturdier. I took it for a test ride and everything shifted smoothly. To finish up I re-taped the handlebars and taped up the seat which is starting to fall apart. A motorcyclist from Buenos Aires showed up in the afternoon. He is a machinist and when I showed him the rack he had a laugh. It's definitely a bad design. There is only one support post on each side and the posts are perforated for screws. No wonder it is so weak. All the weight of my gear is sitting on top of two thin bars of aluminum that have holes in them. He is doing a long trip on a Chinese-made 275cc straight 4 cylinder. I've seen lots of people traveling long distances on low-cc motorcycles in Chile and Argentina. It would never occur to me to travel long distance on such a small engine bike, but I guess here it's just a question of money, a large-cc bike is out of reach for most people. I give them credit for making do with what's available.

I'm feeling optimistic: I have some new clothes, clean clothes, new parts on the bike, panniers full of food for the next pass, and I'm well rested because I've had my own room for 3 nights at dormitory prices. I threw away a bunch of stuff that I hadn't been using to make space for everything.

Tomorrow it's back on the road...