El Chaya to Caranavi: Construction on the real Road of Death 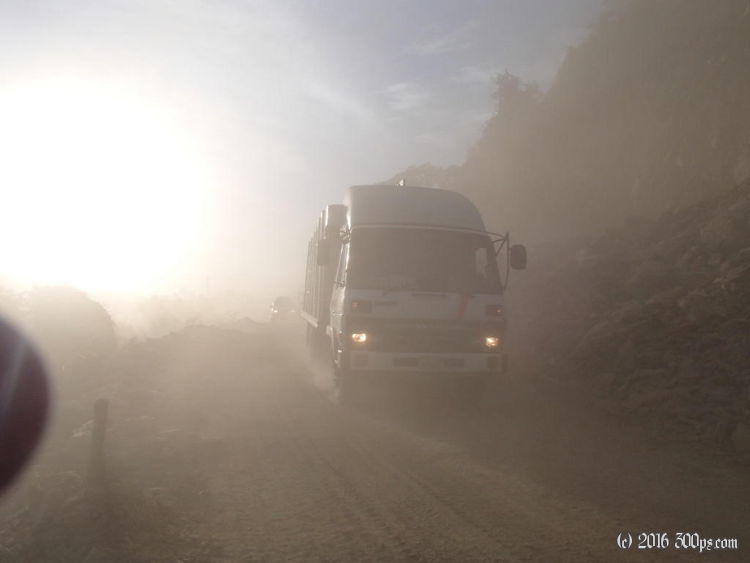 I wasn´t the only one who was using the soccer pitch for non-sports activity: a bunch of people showed up at 7 am to dry coca leaves. I packed up and rode 5 kilometers through a construction zone. I thought it was odd that there was no traffic other than construction vehicles until I got to a barrier and found out why: the road is closed from 7am to 5pm while they work on it. They told me there was no way I could pass until 5pm because the road was completely blocked.

I went back to El Chaya and futzed around for a few hours. I thought about what they had told me, if I waited until 5 I would have to ride the 40-odd kilometers to Caranavi in the dark on dirt and mud alongside a cliff with truck traffic. It didn´t sound appealing so I went back to the barricade and talked them into letting me continue on towards Caranavi. It was true that the road was completely blocked in several places but never for more than an hour at a time except for one place where I talked the spotter into waving off the machines while I carried the bike over mounds of broken rock and dirt. On the other side of that obstacle I spent a half hour shooting the shit with a bunch of the workers. The sun came out and it got hot - I rode in short sleeves and shorts for the first time since way back near Arica, Chile.

I stopped for lunch in El Choro (wheat soup followed by chicken and rice). The drive train was making a racket from all the mud and water that had gotten on it so when I left El Choro I brought it down to the river for a swim. I got as much mud off my gear as I could then I lubed the chain. Nothing stayed clean for long. More mud and water followed by a 2 hour dousing of dust took care of that. The big question of the day was whether I would be able to reach Caranavi before they released the traffic from the other side. The answer was: nope. I still had 10 kilometers to go when the long stream of trucks and cars began passing me heading towards La Paz. It was about as dodgy of a ride as I´ve ever had: riding on the left hugging a cliff while trucks and cars came at me through a huge dust cloud on a road that at times was barely wide enough for one truck. When a truck came up behind me it was just icing on the cake... when that happened I would just stop on the edge of the cliff and hold my breath while they passed me.

I arrived in Caranavi at sunset completely covered in dust. The city is a prime example of Bolivian chaos: the main street has some traffic lights, none of which were working, causing a scrum of trucks, buses, cars, motorcycles, and pedestrians all beeping and yelling at once. The scene is witnessed by stray dogs, street vendors selling everything from oranges to chocolate, old women cooking fried chicken off of push carts, and welders working on cars on the sidewalk to name but a few.

After dropping my gear at an hospedaje and taking a cold shower I picked my way through the melee to have dinner, then walked a ways until I found a bank to get some cash. On my way back I stopped for a second dinner. The girl who served me asked what I was doing there but refused to believe me when I told her I had ridden here on a bicycle from Patagonia. She told me to swing by tomorrow morning on my way out of town so that she could see the bicycle for herself.

I saw a couple of young Western girls waiting at the bus station, clutching their bags with terrified looks on their faces. I almost stopped to ask if they were ok but I chickened out. They were probably just overwhelmed by all the commotion.

Back at the hospedaje I realized I would be in for a long night with all the noise from the street and the heat. I should have looked around before settling on a place but I was too tired to care at the time.

Crazy day... they should call this road the "Road of Death" instead of the other, at least until they finish construction.