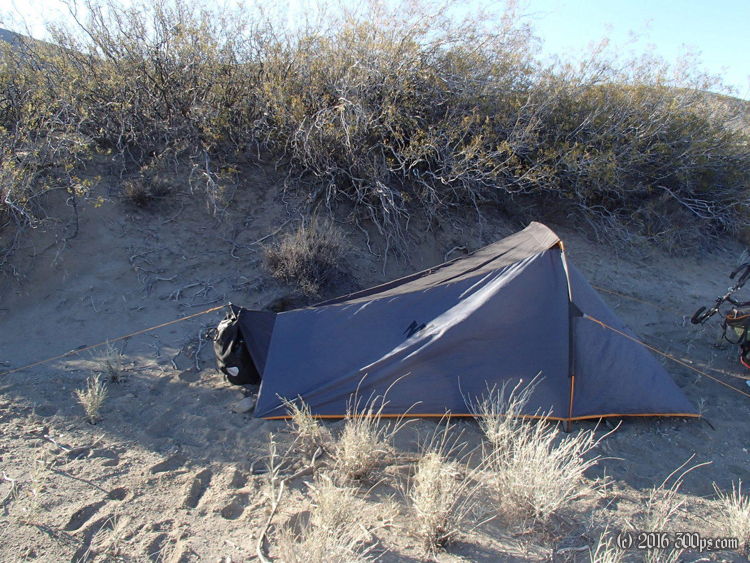 I could see from the map that I would be heading into the much drier pampa today so I took advantage of being next to the river and shaved and made oatmeal. When I shave I have to remember to put sun block on my face, otherwise I burn my chin, normally the beard protects it. As I was breaking down the campsite a couple of guys walked by, crossed the river, then climbed up the opposite ridge. They saw me but didn't say anything.

From where I camped the road climbed for about 25 kms up to 1650 meters (I haven't calibrated my VDO since I was at sea level in Chile, but it seems to be reasonably accurate). Then there was a 10 km decent until the border control post at Pino Hachado where the road turned to pavement. There were some ups and downs at first until a huge descent, about 30 kilometers, and I had the wind in my favor. I hit 70.5 kph at one point; I think that's the fastest I've ever gone on a loaded bike. Long descents are great for morale. All morning I was cursing the ripio but I arrived in Las Lejas feeling like a new man.

I grabbed a coffee and asked around about services. The gas station was a climb heading in the wrong direction but I did it anyways knowing I could probably get on the internet there; which was true only at the café next door to the gas station. I decided to have lunch so I could update the blog and charge the laptop.

I went back down the hill into town to hit the grocery store. On my way out of town I could see that they had a nice municipal campground on the river but I wanted to take advantage of this wind, there have been very few days on this trip where the wind was in my favor. When I left town it was 5pm, I rode for another two hours flying along with the wind. When Ruta 40 turned towards the north it became a crosswind and I slowed way down. Time to camp. I set up behind a sand dune and had a cold dinner. Since I had had a decent late lunch at the café I wasn't too hungry (well, relatively speaking...).

Lots of people beep and wave in Argentina, I love that. Buena onda...

Tomorrow will be all about the wind direction.