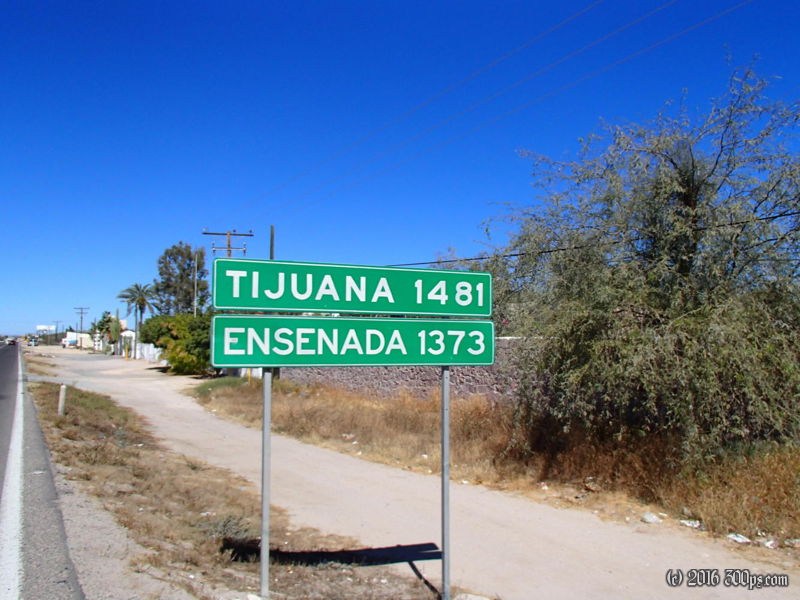 I was in a dorm with 4 other guys, none of whom were there when I went to sleep, but I didn’t hear any of them come in thanks to my trusty earplugs. I got up at 8 and took the bike out to get a cup of coffee. No breakfast was served in the hostel so I just had a few bananas and an instant soup. I chatted with a French guy and the Mexican woman who owns the place along with her American husband. Nice people. I didn’t get out on the road until after 10. The sun was really beating down, I broke out the facemask contraption that a cyclist had given to me back in Bucaramanga, Colombia. It works like he advertised, keeping the sun off while still allowing me to breath and not feel too hot.

Towards the end of the urban sprawl heading north from La Paz I took a short break in front of a báscula. An older gentleman came by and asked me where I was going, when I told him he informed me that there are lions in the mountains here and that I should be extra careful. Lions! That would be something! The rest of the day consisted of hot desert riding. The sun was really brutal. At one point I realized that I have some sun blisters on my left calf, the leg that takes the brunt of the sun from the west when I am riding north. I resolved to be more diligent about putting sunscreen on my legs. The late start, some small hills, and consistent headwinds added up to not much progress for the day. The road is fenced up tight so when I spotted a possible opening at a wash I decided to call it a day. I used rocks to raise up a couple of the T-stakes holding the barbed wire running across the wash, allowing me to slide the bike underneath the lowest wire. I set up my new tent recently acquired from Decathlon in France for the first time. It isn’t quite what I expected, I thought it was going to be nearly identical to my old Quechua tent, but I think it will work out ok. Time will tell. It is roomier that the old one, has a side entrance instead of the front, and uses a different system for the poles and stakes. I suspect it isn’t great in heavy winds.

I made a big dinner of rigatoni with beans, garlic, onions, tomato, habanero chiles, olives, and spices. After dinner was finished I ended up with a half-liter of water left over for tomorrow morning. I left La Paz carrying 7 liters, this hot and dry climate is going to require tons of water to get through the day.