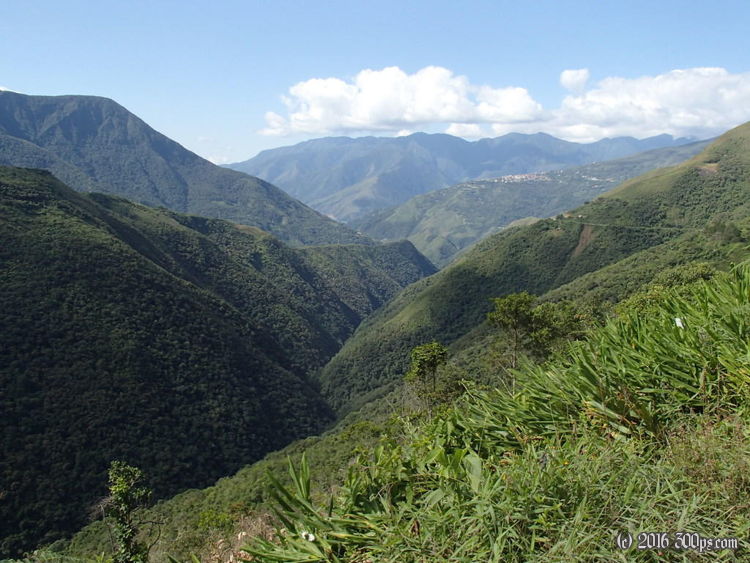 Yesterday late in the afternoon another French cyclist showed up at the casa: Alain from Montpelier. He is coming down from Peru after starting his trip in Colombia back in October. I traded him Argentine pesos and maps for Peruvian soles and a map of Ecuador. He, Aurélie, and I spent the evening talking about our travels.

I was up at 5am this morning and on the road at 6 to avoid the morning rush hour. From La Paz up to La Cumbre is a stiff climb: 1,050 meters over 24 kilometers. I broke it up by stopping for breakfast on the street when I got close to the city limits. After the final police checkpoint most of the traffic consisted of tour company vans loaded with mountain bikes on the roof headed towards the Camino de la Muerte (Road of Death).

I made it to la Cumbre around 11am. At 4,600 meters I was feeling the altitude. After a week off from cycling I was feeling out of shape, even with all the hiking we did. 10 kilometers into the descent on the other side is a self-proclaimed drug search checkpoint. They asked me for my papers and I gave them my Spanish residency card because I didn´t feel like digging in my bags for my passport. They were ok with it and I was on my way. After the big descent came some minor roller coaster hills then the exit for the Road of Death. I had lunch next to the exit, a big bowl of pasta and meat soup and coffee for 90 cents.

At this altitude the whole place was fogged in. It had me second guessing my plan to go down the Road of Death but in the end I went for it. I´m glad I did, it´s a beautiful road and I had it all to myself. The mountain bike tours must have already finished up by the time I got there. After descending for a couple of hundred meters the mist started to give way to bright sunshine. The road is a thin strip of ripio hewn from the sides of the mountains. There are dozens of waterfalls along the way, some of them falling right onto the road. I can see how this path earned its reputation for deadliness with no guard rails, a sheer falloff of hundreds of meters, and barely enough room for one truck at a time. The road has become more of a tourist attraction than anything now that all the traffic uses the new paved highway.

The only traffic I saw until I got down towards the bottom was a pickup truck of engineers who were surveying the road. At the bottom they have a checkpoint set up where they charge cyclists...bummer, I thought I had gotten away without paying when I had Coroico in my sights. After the checkpoint a bunch of the tour vans passed me heading back up the mountain. I guess they have two shifts, a morning run and an afternoon one. Lots of young backpacker types leaning out the windows to take a picture of me. I got to the bottom to find a small pueblo full of bars blasting loud music catering to the backpackers. A couple of the tour guides congratulated me on making it down fully-loaded. I didn´t think it was that bad, the roads on the passes between Argentina and Chile were much worse. The only thing about this road is that you have to pay attention, no rubber-necking or daydreaming or you might go over the cliff.

I got directions from one of the bartenders and after 5 kilometers I was back at the junction where we had caught a bus back to La Paz after hiking down el Choro. Here again were scads of backpackers wandering around shirtless , drinking beer, and generally behaving like assholes. I spoke to the engineers I had seen earlier for a few minutes (one of them said his 7-year old son had ridden the Road of Death), then I was on my way. The road towards Caravani is built high up into the side of a river canyon. I was hoping that the landscape would change so I could find a place to camp but it didn´t. This is the worst kind of environment for stealth-camping: a road that has a drop-off that goes straight down on one side and a cliff that goes straight up on the other. The cars are still driving on the left on this section just like they were on the Road of Death. I´m not really sure why they do this. I found it to be nerve-racking because I was heading North which meant that riding on the left had me skirting the edge of the cliff (with no guardrails of course...) Plus I have the mirror on the left so I couldn´t see a thing behind me.

I kept riding and it got later and later. Finally I was desperate: at a small town I asked a store owner if there was any place to camp. He said to go ahead and camp on the soccer field, no one would bother me. I strongly dislike camping out in the open like this but I had no choice. It´s ironic that just last night I was telling Aurélie that I had never asked for permission to camp on all my trips... less than 24 hours later there I was asking...

Quite a few of the older people in this area do not speak fluent Spanish, particularly the women who sell things on the street and run the small stores. I don´t know where the older men are, I see very few of them.