15 kilometers west of Santa Rosa to pueblo by the river: Everyone telling me to give up 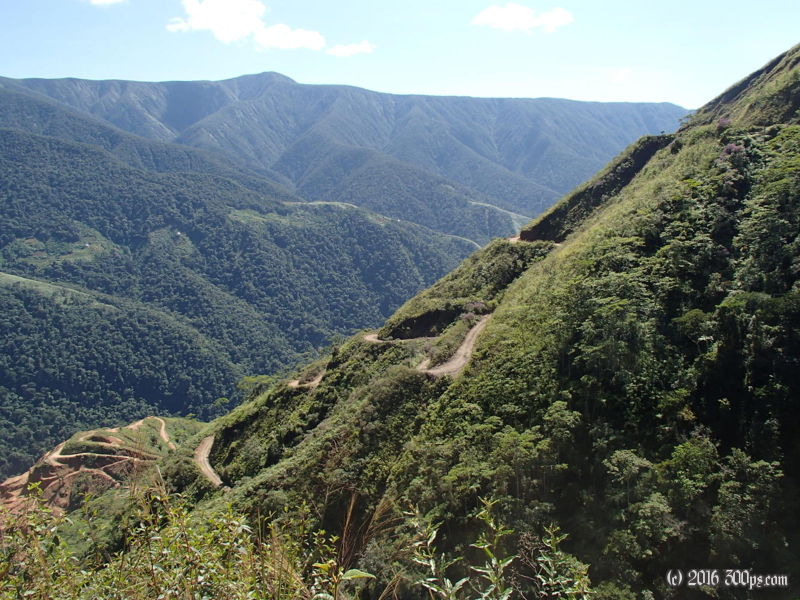 I packed up the campsite and got going early, on the road around 7am. The first pueblo of the day was Incachaca, small but big enough to have a couple of stores where I stocked up on food. As it turns out I needn't have worried about getting supplies because there are small villages along the way every so often and most of them have stores. The owner of the place where I bought food was the first of many today to tell me to quit and get a collectivo to Sorata (a collectivo is basically a communal taxi).

From Incachaca the road climbs sharply for what seemed like forever. I met a couple of people walking down in the other direction who also exhorted me to give up and get a car. They are really starting to make me nervous. How much worse could it be? After this first major climb it was a roller coaster into Consata, a town big enough to appear on my map. The town was full of cool people, I chatted with a bunch of them and had a good lunch at a pensión. When I was leaving the owner gave me a bunch of oranges. More climbing ensued, with a number of tough river crossings, and a couple of wooden hanging bridges that made my heart pound trying to get the bike across them. No sudden movements on those things or they start swaying like crazy.

Towards the end of the day the wind started to howl, I hadn´t had a wind like that since before La Paz so I had forgotten what it was like. Fortunately it was blowing mostly in my favor except for when the switchbacks took me in the opposite direction. A woman with a small child flagged me down and asked me all kinds of questions (and also tried to dissuade me from pedaling to Sorata). Everyone wants to know how much the bicycle is worth and more than a few have asked me to sell it to them. I guess it´s hard to get bicycles up here.

Late in the day I came to a bridge that was under construction, it looked passable to me on a bicycle but the guard was having none of it, he kept telling me to take the desvío (detour). Later I would find out that he

probably wanted a bribe. Fuck'em, I don´t mind the detour, even though it had ridiculous grades and I had to push my way up most of them. At the top I met a cool older gentleman with his son who asked me all about my trip and tried to hook me up with Jesus. He said I could stay down in the pueblo by the river for the night. Stealth camping here was a virtual impossibility with what little flat land there is already claimed by someone.

I descended into the pueblo and asked about accommodations. I was told there was nothing so I asked about camping on the soccer field and was told that was fine. When I went to make dinner I discovered that my lighter was out of gas, but the good news is that bencina blanca is so flammable my stove lights right up with just the spark from the lighter. As I was cooking 3 guys came by and we talked for a while about the route I had taken from La Paz. They were impressed that I had made it this far but like everyone else today suggested I take a collectivo from here. I must be in for a serious day tomorrow... They also said there was an American living up the hill who worked in one of the gold mines. I´ve seen a bunch of mines since I left Guanay, all gold mines apparently.

Later on someone set the edge of the soccer field on fire. It scared the shit out of me at first because the grass is super dry here but it burned out quickly. Gunshots from up the hill are ringing out periodically, there is loud latino music going in the background, motorcycles are putting around, the smell of smoke is in the air; it's just another night in a Bolivian pueblo.