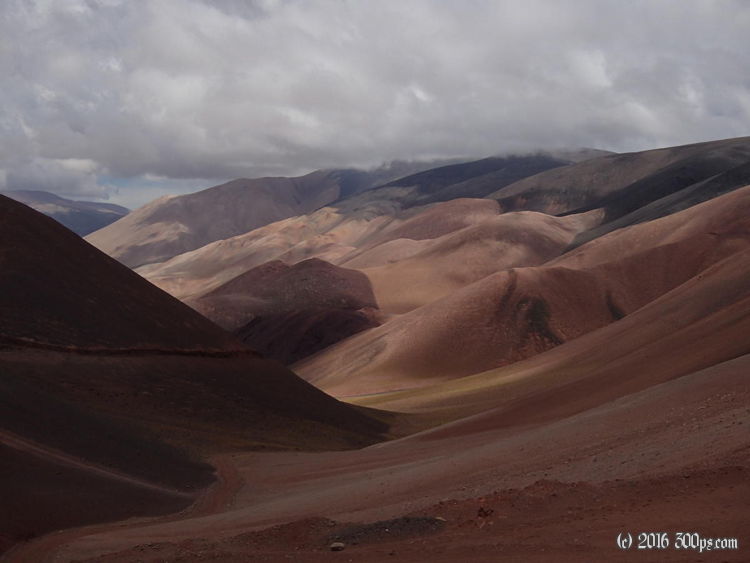 César said he wasn't going to get up until 9 so when I got up at 7 I made food for the day on a little gas stove they had in the barracks. While I was fixing the flat from yesterday I discovered that the other post of the back rack had broken. I only had one of those thin tent stakes that was holding up the other broken post so I stuck in the only thing that I had that fit: a spare wheel axle. The rack is totally hacked together now. I was completely out of breath when I finished pumping up the tire... life over 4,000 meters is rough. César told me he's been working this job for 5 years and he still has trouble sleeping sometimes at this altitude.

By the time I had everything packed and put back together César was up and making coffee. It turned out his colleagues didn't make it back to the camp last night, they stayed down in Jagué. The road down there was cut off due to all the rain and they were still working on patching it back together. I drank coffee and talked to César for a while then it was time to go. From Barrancas Blancas there is an 8 kilometer climb that I suffered through, then 50 kilometers of up and down until Laguna Brava. The Swiss cyclists were not in the refugio where they had been yesterday. I didn't pass them so maybe they had headed back down the Argentine side.

Around 11 a bunch of motorcyclists passed me heading for Chile. That meant that they had opened up the road. The scenery was amazing at Laguna Brava: bright blues and silvers set against the red and green mountains. When I turned off onto the ripio road a car stopped and offered me something to eat, yes! It was an Argentine family who had lived in Boston for 5 years, their two year old son was actually born there. We compared notes on working in Boston, they took some pictures of me, then it was back on the road with cookies, crackers, and juice. I never enjoyed cookies as much as these. Something sugary was just what I needed. I had run out of snacks yesterday.

I passed a convoy of cars (including a taxi, I wonder what that fare was like?) that was on its way to Laguna Brava for some site seeing. There was one last set climbs leaving the lake area that were brutal because of the head winds and the fact that I was exhausted at this point, I just wanted the descent to start. When the descent did start the road was a mess from the rains. These were the sections that the road crew guys from Barrancas Blancas had fixed yesterday. The back rack fell apart on this stretch. The improvised supports I had put in were not keeping the rack high enough to clear the tire. I tried a bunch of different things but it kept scraping the tire. Finally I got it to stay up using cable ties. While I was working on it the convoy of cars passed me coming back from the laguna. A couple of them stopped and asked if I was ok. The rest of the descent was wet and muddy, the road had been completely washed out by the river. I just skidded my way through it all, walking the bike when the mud was too deep.

When I reached pavement I decided to go all out to Jagué. I didn't have enough food to camp another night. There were strong headwinds but the descent was steep enough to make it pretty fast. I rolled through more stretches of amazing scenery until I came out on a plain above Jagué. When I reached the town there was a checkpoint with an AFIP agent and a gendarme. They checked my passport. The AFIP agent said: Ahh, the land of Obama? I said yes, thankfully not the land of Romney. I asked them if there was a store and they pointed the way into town where there was a despenda where I got some food for the night. At the store a guy with a walkie-talkie said I could camp next door in the yard of the wildlife agencies' barracks. They had a vicuña tied up out front. I didn't get its story... the agent said they were there to prevent poaching.

I set up the tent in the yard and cooked dinner. I am completely exhausted after that odyssey... tomorrow will be immigration paperwork in Vinchina then I'll head to Villa Union to see if I can get a rack.

That was one difficult ride going over this pass, the most difficult of the trip. What makes it so hard is that there is about 100 kilometers of riding where you never go below 4,000 meters. It was worth the effort though... I think this has to be one of the most beautiful places I've ever seen. I'm putting it right up there on my list with the fjords of Norway.

Apologies for the picture overload, I just couldn't keep the camera in my pocket. I'm only posting about a third of the photos I took.