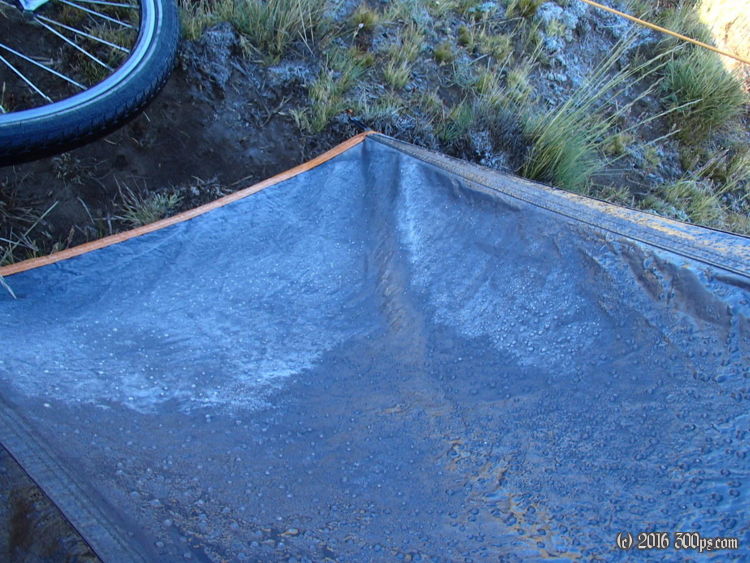 It was cold in the morning with frost on the tent but I was thrilled to discover it was only breezy. I made oatmeal and was on the road by 7:30. Progress was much quicker today without all that wind. It never really warmed up all that much but the sunshine felt great. I made a stop in Aldea Beira for some groceries and water and then continued northeast towards Hito 45. There are two roads that go to Coyhaique from here, I wasn't sure which one to take so I opted for the one that had a Puesto Frontera sign. Since I needed to get an exit stamp from Argentina in my passport I figured I had best play it safe and go to Hito 45. Some of the Andean passes have no checkpoints and you need to get a "salvaconducto", a kind of pre-clearance, before you go over the pass.

I had a good time at the Argentine border post joking around with the guards. There were about 5 of them just sitting around; I was the only person that went through for at least 2 hours. My passport says I live in Barcelona so they wanted to talk about Messi... I'm not a big football fan but I knew enough to keep the conversation going. The customs guy gave me a fright when he asked me for the paperwork for the bicycle, of which I have zero, but he was just messing with me.

8 kilometers later is the Chilean border post. Very cool guards there as well. They wanted to know all about my equipment and how many kilometers I ride per day. The two customs agents do motorcycle trips together and average 500 kms per day. They had a look at my food bag but I knew beforehand that Chile is strict on not allowing any fruit or vegetables so I had nothing objectionable.

The landscape changes dramatically another 5 to 10 kilometers down the road, which is still ripio but in much better shape on this side of the border. Everything is green, the hills are covered in trees, and every valley has a river. Being back in wetter climes will relieve the worry about water while riding, on the downside there will be more rain of course... which didn't take long to make an appearance. About 10 kilometers outside of Coyhaique it started raining. I was planning on camping but the rain changed my mind. I rode around looking for an hospedaje until I happened upon the tourist office. They gave me a list of 5 places nearby, one just had a good ring to it so I spent the extra time to find it instead of going to the closest one. I'm glad I did; the place is run by a nice older woman who ended up giving me a cabaña for the same price as a room because they had just finished painting the bathroom in the main house.

Coyhaique feels very Chilean. Lots of stray dogs everywhere. Chaotic hustle and bustle. More South American than Argentina which has more of a European vibe. Everyone has their wood stoves burning; the city smells like winter. I dropped my gear in the cabaña and immediately set off to do errands. I found a laundry but there is no self-service, they do it for you. I figured this would happen. I wish self-service laundries would catch on in South America, there are very few of them around. The downside of full-service is that if your entire wardrobe fits in one load, you're stuck waiting for them to wash it for you. I'm walking around in rain gear because it's the only stuff that didn't need a wash (fortunately it's raining so I blend right in). I had to push hard to get them to promise to deliver my clothes tomorrow at noon. It means a day off from riding, a bit annoying to have to take a day off for laundry, but it's a good thing because it will make me do some chores that need to be done.

Next I was off to a home improvement-type place where I easily found bencina blanca (white gas) for the stove, batteries, and duct tape. Chile is a shoppers' paradise compared to Argentina. No import restrictions here. Dinner at a restaurant that has WiFi then back to the hospedaje.

As I write this I am sitting next to the wood-burning stove drinking mate and listening to the rain hit the roof. Life is good. One of the things I love about cycle touring is how great the simple comforts feel after going without them for a time. If I were living in the city right now, with all my creature comforts taken care of, I'd probably be doing something silly like worrying about the stock market. Instead I'm just deeply grateful to have heat, a roof over my head, and a full stomach.