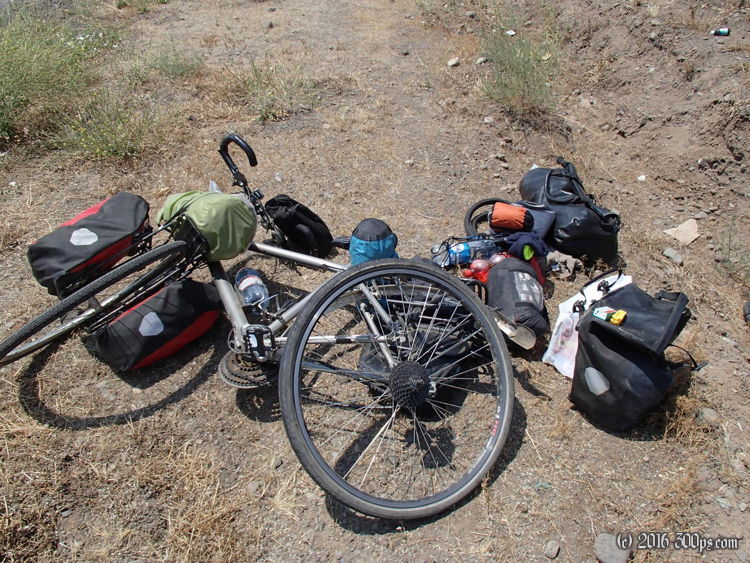 I was up early and ate breakfast at the hostel. They didn't make any money on me... As I was loading up the bike an American guy from Chicago who lives in Pujón came out and spoke with me for a few minutes.

I headed downtown to Calle San Diego, someone had told me yesterday that there was a bike shop there. I didn't have much to go on as it's a long street, but I asked a couple of people and found it. There is a 5-6 block area on this street with nothing but bicycle shops. This has to be the best place in South America to get bike stuff... I looked at all the stuff on sale wistfully, because although I only needed a few little things now I knew that at some point I would badly need something and would probably be in a place where I couldn't get it. I settled on a Maxxis 700x35 tire as a spare for the front. Now I could throw away the splitting Michelin that I've been carrying. I also bought a mirror and a small cable lock for the front panniers. The shitty one I bought in Bariloche broke the other day.

A couple of guys came and talked to me when they saw the loaded bike. Both of them have plans to ride the Carretera Austral in the fall. One of them had just bought the Ortlieb classic panniers (same ones I have), he hasn't used them yet and wanted to know what I thought of them. I told him they are the best pieces of equipment I have. I've toured for over 10,000 miles with mine and I've never had a problem. They still work like new, are perfectly waterproof, and only need the occasional tightening of a bolt. He said he paid US 180 for the pair which struck me as a good price given how far they have to travel to get to Chile. I bought mine for 90 Euros on sale at Karstadt in Berlin, a great deal but I was practically right next to the factory. I told him to ride the Paso de Pichachén if he ever gets the chance.

When I was done it was already 11am. I made my way north through the city center, total chaos, I only vaguely knew where I was going so it was an adventure. Always a bummer to be in a big city with a loaded bike and suddenly have to take a leak. Had to get creative... I stopped at a supermarket to load up on supplies, I was completely out of food.

When I finally made it to the outskirts and was next to the highway I needed to get on to go to Los Andes I stopped at a park to eat. The caretaker came over and started talking to me. He's an older gentleman, he said he grew up in the countryside in San Fernando and now taking care of the park is his retirement job. The park looks fabulous, I could tell he took a lot of pride in his work. He explained to me what the flowers were and what he was planning to plant next. I told him about my trip and where I was going. He said not to worry about the no bicycles allowed signs on the highway, as a foreigner and the fact that I was travelling long distances the carabineros would leave me alone. Which proved to be true, I rode on the highway all afternoon passing toll booths and police cars but no one said anything to me.

It was really hot, I was sweating profusely. It felt great. I love hot weather riding. At around 4:30 I got a flat, a staple in the back tire. I didn't particularly mind because I knew that I had been lucky after so much city and highway riding to only get one flat. I patched the tube next to the highway and moved on. I was already resigned to not getting in a lot of kilometers today because of all the time I spent at the bike shops.

When I approached the tunnel lots of truckers were beeping at me so I figured I had better take the bypass than ride the tunnel. I took the exit for the bypass at Cuesta Chacabuco, it's a left-hand exit off the highway right after the merger with 71. It's not marked anywhere and there are no signs but I figured it had to be the bypass because it was paved and heading north. This road is a decent climb, going up about 650 meters over 10 kilometers. It was hot, I just put my head down and rode the switchbacks, never looking more than 10 meters in front of me. Near the top the road turns to ripio. They are working on paving it, a bunch of workers were up there packing up to leave for the day when I went by. One guy leaving in a truck screamed out the window at me as he went by. It's surprising how infrequently that has happened here in South America, it seems like it happens all the time in the states.

After the summit the road follows a ridge for a ways before the descent begins. It was 7:30 when I started the descent, I stopped for a break and then just decided to camp there. It was a close call with the water but I didn't know what was down in the valley and the road on the way up had been tightly fenced so I figured I had better camp here where there was a spot. I cooked up a huge dinner and drank some of the tomato paste packets I had bought earlier in Santiago to compensate for the lack of water.