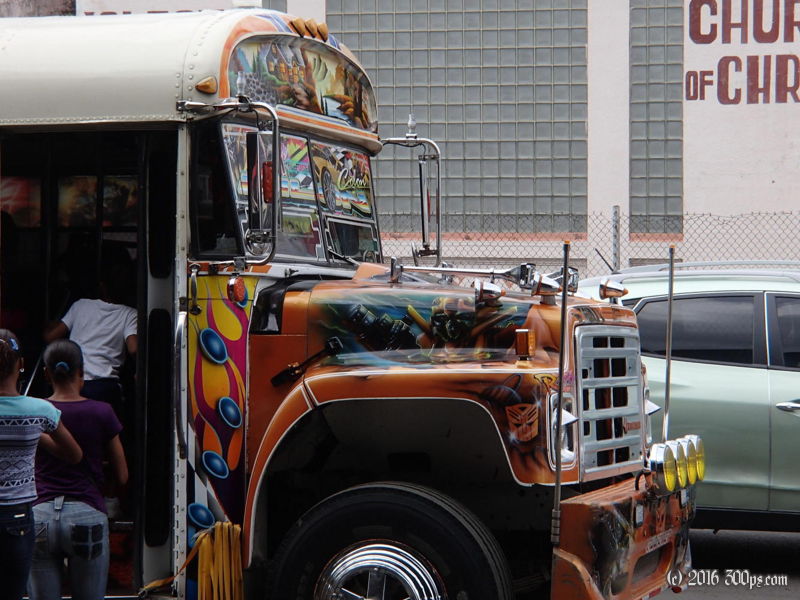 We waited until noon to get a bus to Colón. It turned out to be an old US school bus repainted with cartoon themes. At first the driver didn't want to take the bike but eventually he relented so I opened the back emergency door and stuffed it between the seats after removing the front wheel. It felt surreal to be traveling with my bicycle on a old school bus jam packed with school kids. We arrived at the bus terminal in Colón then the captain went off to the immigration office with our passports while we waited in the bus station chaos. Colón is not a pretty place. From what I could see it had no redeeming qualities whatsoever. While waiting I decided to pump up the tires... in the process I broke the valve on the rear tube while removing the pump nozzle. I swapped it out right there for a previously patched tube, then realized that I have a broken spoke on the back wheel. Ouch... More repairs to take care of. I need to pick up some new tubes as well.

We got our passports back after an hour with the required stamps. My fake onward-travel ticket to avoid paying a $100 entry tax apparently worked with no complaints, even though the flight was supposed to leave at 9am that morning so I would have missed it... I said my goodbyes to the captain and the Israelis then hit the road. I only made it about 10 kilometers when a pick-up truck pulled over and the driver said I was sure to be robbed or killed in this area if I kept going. He offered to drive me well past the city so I threw the bike in the back. Then he offered to drive me all the way to Panama city so I said what the heck, this stretch of road is ugly and it was a good deal to be able to avoid it. His name is Eric, he has lived in several different parts of the US working as an electrical engineer. He had nothing but bad things to say about Colón. Apparently just that morning there was a small riot where some people burned down some buildings. At any rate I could see that Colón and its surroundings were not places that I wanted to explore. We talked about Panamá and different places we had both been in South America, stopped for dinner at a roadside place, then stopped at a few of the locks on the Panama Canal before he dropped me at the door of a hostel in the old section of Panama City. As I was making dinner the Israeli women arrived...small world! I wasn't expecting to beat them to any spot...