Chilean immigration to Barrancas Blancas: Paso Pircas Negras: Over the pass at last 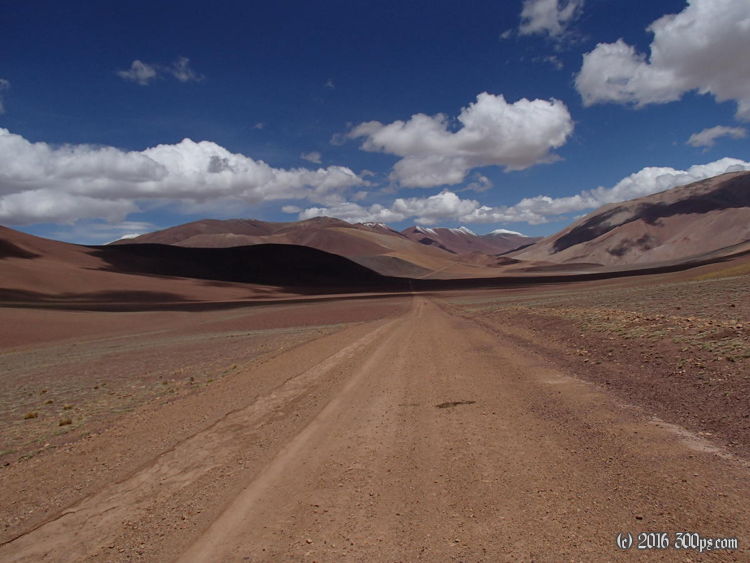 I had coffee with Darien and Guillermo before they took off down towards Copiapó. They were hoping to do it all in one day; it's a long trip at 180 kilometers but it's almost all downhill. I had to wait until 9 for the immigration system to come on line so I spent the extra time making a beans and rice burrito mix for the day.

At 9 I did the paperwork with the PDI officer and I was on my way. It turns out that they didn't give me an entrance stamp at Agua Negra... I left immigration today with 2 exit stamps.

The serious climbing starts about 5 kilometers past the immigration post. From there is a set of switchbacks rising about 800 meters over 18 kilometers; with thick sand, mud, and washboard. The grades varied from 3% to 14%, with long stretches of 9-12%. It was a really difficult climb. It would have been tough anyways due to the altitude and the stiff grades, but the thick sand and mud really put it over the top. It was a slog. When I got to the top, about 4200 meters, I was hurting. From there it was a descent into a beautiful valley full of vicuñas (animals similar to llamas or alpacas). At the end of the valley the road climbs another 150 meters to the actual Pircas Negras pass. Once again the signs were a little disappointing... what was not disappointing was the start of a long descent on a mix of crumbling tarmac and ripio. The wind was really ripping up here but it was in my favor.

At 10 kilometers into Argentina I stopped to check out the El Zajon refugio; a circular rock structure with a an entrance passageway like a snail, presumably to keep the wind out. It looked old and very sturdy. I thought about staying here but I was aiming for the highway department camp that the Argentine cyclists had told me about. Right when I got to the vialidad camp it started raining and hailing. A guy came out (César) and said not to worry about continuing in this weather, I could stay there at the camp. He showed me where the showers and bunks were. A shower with hot water! It was a beautiful thing. After I cleaned up and installed my stuff I went to the common area and talked to César for a couple of hours over coffee and a dinner of pasta with Guanaco meat. First time I had ever tried Guanaco, not bad, a bit gamy but that's to be expected. We talked about different places in Argentina and what life is like living and working up at the pass. The camp is at 4,100 meters altitude. There are two teams that rotate 15 days on, 15 days off. Their job is to keep the road functioning, rescue people in trouble, and they also offer free accommodations to anyone that needs them (like myself). He cleared up one thing that I had been wondering about: when I saw a group of about 100 people on horses as I was descending the Cristo Redentor pass back near Mendoza I had wondered what it was all about. César said that it was a re-enactment of the war of independence when San Martin crossed the Andes to fight the Spaniards in Chile. His army crossed here via the Pircas Negras pass, the road crew helps organize and support the festival every year in January. He said that they had 300 people at the camp this year. He also told me about a couple of Swiss cyclists who were staying in one of the refugios about 25 kilometers down the road. One of them had lost their passport and when the vialidad guys spoke to them they were still deciding on what to do.

I went to bed around 10 in a bunkbed with 5 blankets on top of me.

I set a new fully-loaded speed record for me on one of the descents: 82.5 kilometers per hour (51.5 mph). The truing work on the back wheel paid off, narry a wobble.