10 kms into Chile to Vicuña: Paso Agua Negra: A long descent into an even more beautiful place 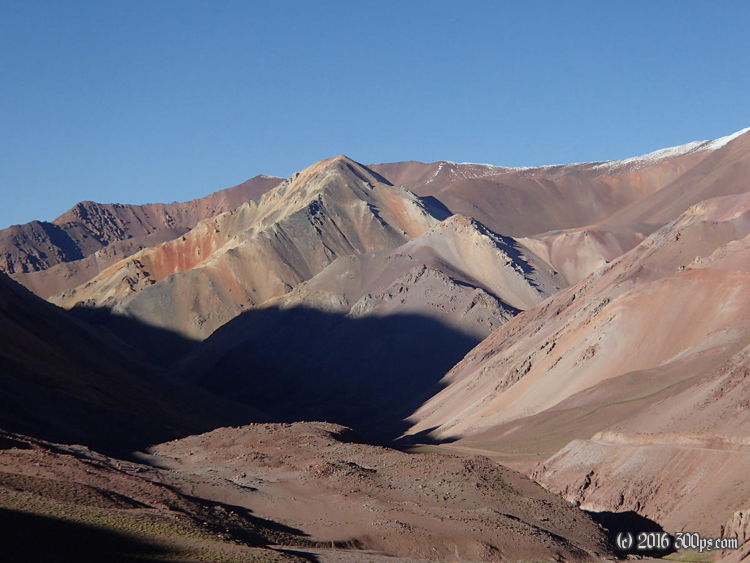 I woke up early feeling good. I thought for sure that I was getting sick when I went to bed but no trace of it today. Nobody had driven through at night so I was safe in my exposed camping spot. My water bottles were frozen solid, it was 3 degrees inside the tent at 5am so it probably got down to about -5 overnight. I made oatmeal, then packed up and started the long descent down to the Chilean border post, about 70 kilometers away. This whole area is non-stop amazing landscapes; mountains of red, green, orange and silver rock.

About 20 kilometers into the descent a highway department worker in a pickup truck stopped and asked me how I was doing. He asked me where I had camped overnight and said it was a good spot when I told him.

The descent was rough due to the washboard ripio. The road on this side of the border is really in bad shape. I just had to take it slow to avoid rattling the bike to pieces or falling. At about 3,000 meters I started seeing the occasional shelter with goat herds. These are probably places for summer pasture. At the Chilean border station they checked me through immigration, complaining as usual about my visa paperwork from Argentina. Every time I have crossed the border the other side has complained about the paperwork I have... There is an immigration form that both Argentina and Chile use with 4 copies: white, yellow, red, and blue. Sometimes the border agents in the exiting country give me red, sometimes red and blue, and sometimes white. One time they gave me nothing. I have no clue what I'm actually supposed to get, and apparently they don't know either. I'm just handing the agents on the other side what has been given to me...

The customs agents actually searched my bike for the first time. Not terribly thoroughly but I had to open each bag. Since I was almost completely out of food there were no issues. The pavement starts at the Chilean border station. As soon as I got on it I picked up fierce headwinds that stayed with me for the rest of the day. I was hoping to just enjoy the descent but it was not to be... at times the wind pushed me down to 6 kph on -2 or -3 percent grades. It was really frustrating because I was tired, out of food, and just wanted to get to civilization after a couple of days in the mountains. There was nothing to do but put my head down and grind it out, I knew I would be glad I had done it when it was over.

The first town was Huerta, which had a store but it was closed. 20 kilometers later was another small town that did have an open store so I could get something to eat. There were signs for camping 8 kilometers off to the south but I decided to just keep going to Vicuña, I didn't want to end up in a long climb to somewhere that may or may not have camping.

When I reached the city I went to the main square and found a tourist information office. They pointed me towards a campground only a few blocks away. It was a nice place, although expensive at 6,000 pesos (I think that is the most I have paid to camp in Chile), after a long day I wasn't going to go look for somewhere else.

I set up the tent as fast as I could so I could go back to the main square to the supermarket before it closed. I grabbed a bunch of food, headed back and made dinner. While I was eating I spoke to a couple, a French guy from Besançon and an English girl from Manchester who are doing a long backpacking tour of South America. They speak French together so I followed suit. It was nice to have a long conversation after 3 days of very little human contact.

After dinner I showered and got on the internet. I had a long talk with the owner about the differences between Chile and Argentina. He lived in Argentina, in Córdoba back in the 80's. While he was there inflation reached 800%... he said companies preferred to shut down because it made no sense to make anything, they just waited as the value of their inventory went up and up. He was living there when the Falklands war broke out. He said the military government at the time asked Argentine citizens to contribute whatever they could to the war effort, then later it turned out they were pocketing the money for themselves. He also said the press in Argentina made it sound like England was losing, they would publish stories with the complete opposite of what was actually happening, while in Chile the press would report on the lies that the Argentine press was publishing.

I didn't get to sleep until 1am, but it was worth it for some socializing...