Ruta 68 km 62 to Los Cerrillos: Didn't quite make it to Salta 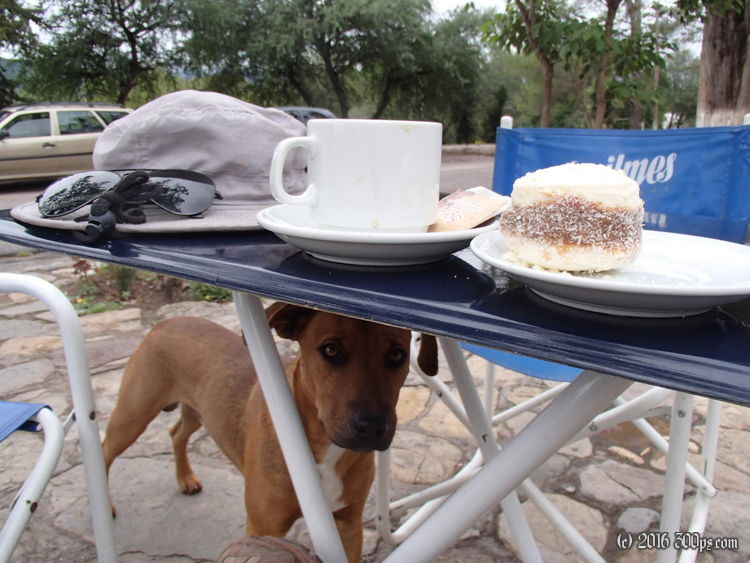 The first 15 kilometers of the day I was still in the canyon before it gave way to plains. It looks like a totally different climate on this side with lush vegetation and farms. It was overcast and much cooler; a welcome change from all the desert riding I've been doing lately. I stopped in Talapampa for some badly needed water and breakfast. Shortly thereafter I ran into 3 Dutch girls on loaded bicycles coming in the other direction. They started in Lima, Peru and were on their way to Buenos Aires via Mendoza. They have a long stretch of pampa ahead of them... They gave high marks to Bolivia, saying the landscapes were beautiful although the people were reserved, but friendly. I tried to sell them on doing one of the big passes but I don't think they bought it. They said good bicycle parts were hard to find in Salta... bad news for me.

The rest of the day was a somewhat boring ride through farmland with steady but not too strong headwinds. At a gas station in La Viña I got to talking to an older Argentine gentleman who was on vacation with his wife headed towards Cafayate. He wanted to know how many kilometers it would take to get to the States from here... I threw out 20,000, with side trips and whatnot who knows? I've done over 6,000 and I'm still not out of Argentina.

After a city called El Carril the road got tough due to high traffic and no paved shoulder. Lots of looking in the mirror to see what was coming behind me and bailing out onto the gravel shoulder when trucks came along. It was overcast enough to make visibility low; in Los Cerrillos I decided to stop since it was only getting darker which meant the road would be even more dangerous, plus I didn't want to have to navigate a big city (Salta) in the dark. I went to the tourism office where they pointed me to the municipal campground. It turned out to be more of a YMCA-type place but the woman at the reception said I could camp next to the pool. It's quite nice: hot showers, benches, grills to cook, all for 25 pesos. The maintenance guy showed me how to operate the showers then handed me the keys to the place and said he would be by in the morning. That's a first. Do they give keys to everyone who camps here? I went shopping for food then made dinner. It started raining just as I was getting into the tent. Great timing! Tomorrow will be a short ride into Salta.

There must be a big airport nearby, some big jets have been flying over for landing and takeoff. It struck me because there is very little aviation activity in South America. In Europe or North America planes are a constant presence practically everywhere, but here it's a rarity to see one.