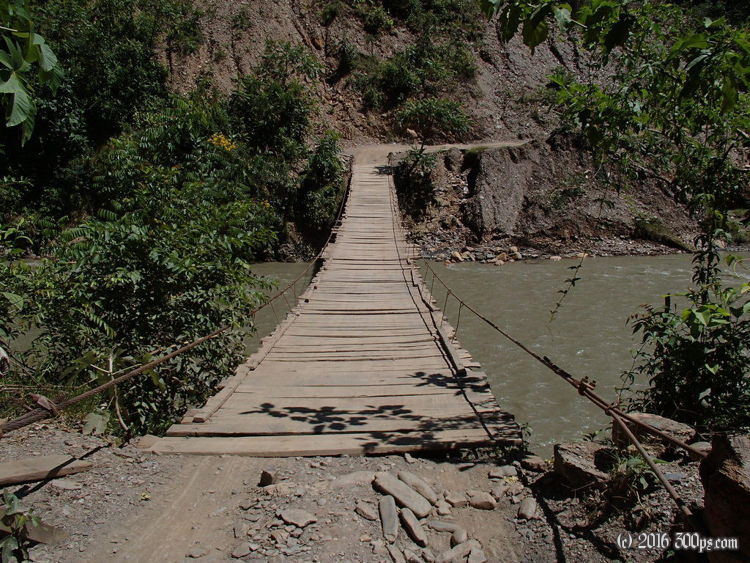 When I got out of the tent I found some huge ants chewing on my hat and gloves. They did a number on them... both gloves and the hat have circular holes and the chin strap of the hat was chewed in half. It hadn´t occurred to me to hide them in the tent to keep them safe from ants...

The climbing started immediately, up and away from the river. Just like yesterday with 10 to 20% grades on loose rock, sand, and mud. Yesterday it felt like torture but today I was really enjoying it, particularly when the sun came out and I could just sweat away. There were a lot less cars today so the dust wasn´t as bad.

At 12:30 I arrived at the first village of the day. I was the event of the day (week, month?) in this pueblo. At the "restaurant" where I ate lunch I was interrogated by 4 generations of the family that runs the place. They wanted to know all about the trip, the bicycle, how I was paying for it all, where I was going, would I ever come back, etc... The bicycle drew a crowd of kids who pinched the tires and marveled at all the luggage. I suddenly was feeling more welcome, since before Caranavi I had felt a lot of animosity from the locals. When I left the restaurant and stopped at a "store" I got the same treatment from the woman running the place. She gave me the rundown on the road ahead: up, down, up, pueblo, up, pueblo, down, up, up, down... she lost me at the third up.

What was true was that there was lots of up. 11th rule of cyclotouring: whenever I think I´m on the last switchback and arriving at the top, I´m not. Some of these climbs just seemed to go on forever. I was loving it. Strange how the climbs can go from feeling like pure hell to heaven in one day. I kept pulling the handlebars loose with the pressure it took to muscle up the climbs. After tightening it a few times I ended up just keeping the Allen keys in my pocket for the next time (with the keys plus my knife my shorts were falling down, I´ve reached a new level of skinniness...). I took a nasty spill on one of the switchbacks and took a good hit to the inside of my knee from the handlebar. I´m feeling it tonight.

I was worried I would run out of daylight before I got to Mapiri but in the end I just made it, rolling into town a little after 6. It´s not very big but it has places to stay and stores. I got a room for 30 Bolivianos and took a cold shower before going out for dinner. I clung to my soup like it was salvation incarnate I needed it so badly. I walked around town for a little bit before retiring to my dodgy flophouse (the bathrooms in some of these places are not for the squeamish...)

Tomorrow I will be off for more climbing towards Sorata.