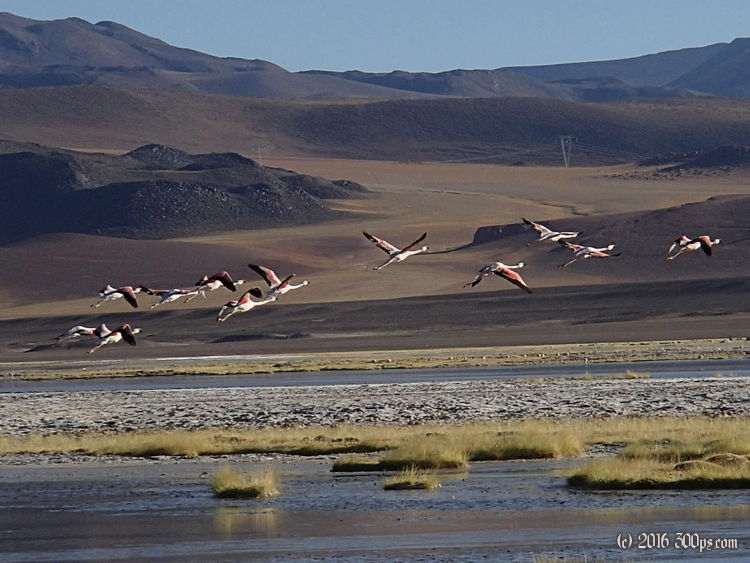 It was cold and windy when I woke up at 6am. I hadn't slept much, the 3rd night in a row with little sleep, and I lay there wishing I was somewhere else. I was thinking about all the stuff I had to do before getting on the road: packing up the tent, the sleeping bag, the mattress, making breakfast, cleaning the pots, etc... it made me want to go on strike. But going on strike is not an option, it's 91 kilometers of ripio to the next town and there is no taxi service here, no way to avoid what needs to be done by checking email or channel-surfing the television, no one else to pack up my stuff because I don't feel like it. This is why I do what I'm doing, it's pure effort with no means of escape.

I got out of the tent, made breakfast, and broke everything down... as cheerfully as I could. The first 20 kilometers were downhill through strikingly beautiful valleys with salt lakes. The lakes were full of flamencos, amazing to think that some of these same birds may have hung out in Miami. At one lake I walked off the road towards the flamencos to see if I could get a few pictures. They are beautiful when taking flight.

When I got back on the bike I realized that the back wheel was completely out of whack. I released the rear brakes and continued on. In the next valley I hit a rock that threw the front wheel out of alignment. I couldn't very well release the front breaks also so I trued the wheel enough so that it wasn't rubbing, it will need some TLC soon, I'll deal with it when I'm in San Pedro.

There was more climbing then I expected, into the wind, and I struggled on some of the hills. More psychological struggle than physical, I like to think that once I reach the top of a pass that it's going to be nothing but downhill from there. That was the case with Paso Agua Negra and Paso Cristo Redentor but this pass is more like Pircas Negras: a climb up over 4,000 meters then bouncing up and down between 3,800 and 4,500 for a good long while.

The big descent starts about 15 kilometers before Socaire. Once in the town I stopped to buy a soft-drink and got lunch at a small restaurant. Vegetable soup with a plate of meat, rice, and carrots plus a drink for 3,000 pesos (about 6$). It was good, exactly what I needed. It was already hot at this elevation, 3,600 meters, and it only got hotter the more I descended. From Socaire to the valley below is a 1,000 meter drop in 20 kilometers, all paved. As soon as I hit the plain the crosswind slowed me down considerably. Sometimes I get a destination in my head, for no particular reason; today I just felt the need to get to Toconao, the next town on this road to San Pedro de Atacama. In my mind I pictured a nice hospedaje with warm showers, good food, and friendly hosts; the reality turned out to be a lot less attractive: there were no accommodations to be had from what I could see. It was getting dark so I just rode out of town for a few kilometers until I found a gravel pit with cover from the wind and out of sight from the road. I'm not a big fan of gravel pits but they have bailed me out the last two nights. While making dinner with the last of my food I heard voices up above me. That cut short my dinner preparations, it was almost done but I ate it without the usual spices because I turned off the light so no one would see me. The people got in their car 15 minutes later and I spent the rest of the night in peace, out of the wind and warm for a change even though this area is still pretty high at 2,600 meters.

Looking forward to getting to civilization tomorrow...