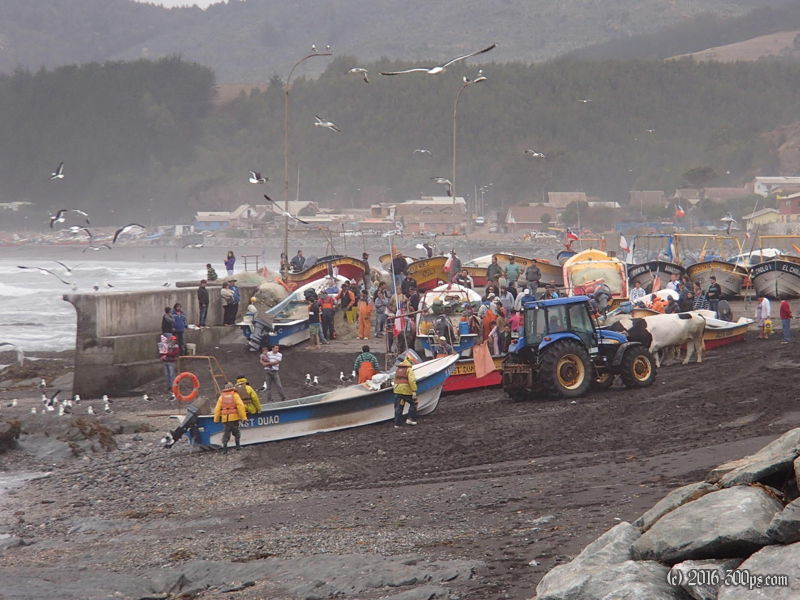 There was some drama at the campground last night. The music went on until dawn. The earplugs mostly drowned it all out until someone who was clearly inebriated started screaming and shouting on and on. When I got up there were no dead bodies or crime scene tape so it must have worked itself out.

I headed up the coast, stopping for a coffee at a small fishing village. The town drunk latched on to me for a while until I told him to take a hike. I spoke to another guy for a bit who has a sister living in California. I rode until the pavement ended in a dirt parking lot, and a cliff. My map indicated that there was a ripio road going up over the mountains and down into Vichuquén, but it wasn't here. I backtracked a couple of kilometers and still so no signs or roads going up over the cliffs, I asked a bus driver and he said it was right there 20 meters away. It just looked like someone's driveway.

I got on it and started climbing. This climb was brutal, 15-19% grades on soft, loose dirt. I had to take 3 breaks before I got to the top. This set the tone for the day... it was loose dirt and washboard ripio climbing and descending almost all day long. When I made it down to Lake Vichuquén I stopped for a completo (a hot dog smothered in tomato, guacamole, and mayonnaise or mustard). They are a great deal for a little over a dollar. As I continued around the lake towards Llico the sun came out and it got hot. There was a lot of tourist traffic on this road kicking up dust, very few slowed down for me. At the other end of the lake I headed north towards Boyeruca. This road was non-stop washboard for 10 kilometers. Washboard drives me up the f#%king wall. I couldn't go more than 7 kph even on the downhills for fear of jarring my teeth out of my head. The bike came out from under me on one of the descents, somehow I landed on my feet and ran it out. I had a fit at that point. I just started yelling obscenities. But I felt better afterwards...

So... hot, dusty, washboard, deep sand, hard climbing, what next to cap it off? A flat tire! When I stopped to buy a bottle of Fanta in Lo Valdivia I came out to find my back tire almost flat. I pumped it back up, hoping it was an illusion, but it was not to be. Half a kilometer down the road I knew I had to bite the bullet and fix it. As I was working on it a guy came over to ask if I needed anything. I said no but he hung around and held things for me while I worked on it. A small crowd gathered on the other side of the road watching, my flat must have been the event of the month in Lo Valdivia.

The road from here was paved, but still with stiff climbing. I went for another hour and a half before I started looking for camping spots. At first the road to Pichilemu was fenced up tight but then it started to get sloppy. At a dirt path where the wire had been cut I ducked off into a pine plantation. I went pretty deep in looking for flat ground, I can hear the ocean but can't quite see it.

I busted my ass today. Other than the one fit I threw it wasn't such a bad day though, I actually enjoy this stuff. Washboard kicks my ass however, mentally and physically.