4 kilometers east of Argentine customs to 5 kms east of El Laco: Paso Sico: Over the pass, Chilean border post, and a hot lunch 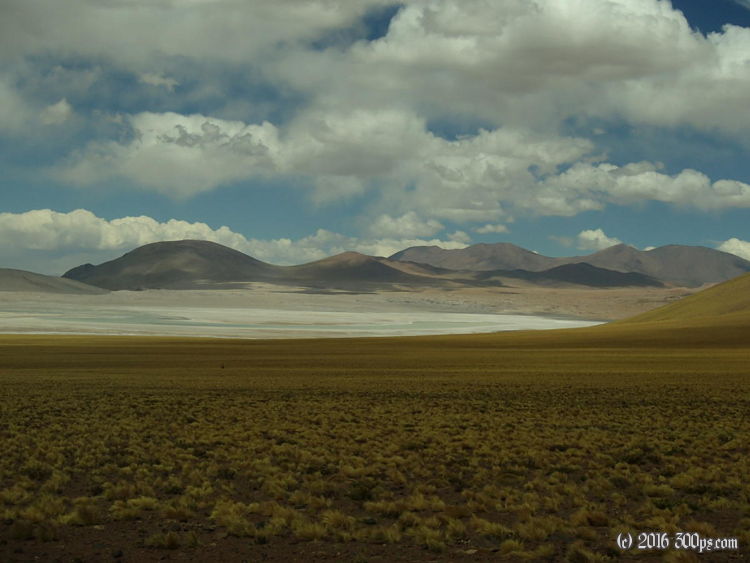 The wind kept me up most of the night, it battered the tent mercilessly, but when I woke up it was calm. It took me a while to get going, finally on the road at 9:30. It was a gentle climb from where I camped up to Paso de Sico which is nothing more than some road and boundary signs. From there it started to climb more aggressively into a valley with another salar. The scenery is magnificent here. Stunning. The road surface was dodgy so it was slow going on the climbs

The road climbs to the top of the valley and then drops down into an even more spectacular valley than the last one. The colors are amazing: red, green, yellow rock; the white and blue salars, the sharply blue sky... I wish I had a camera that could truly capture the landscapes.

The Chilean border post is located in this valley. My streak of car-free touring was broken shortly before the border post by a huge armored personnel carrier-looking thing with German plates. At the post they logged me in but didn't stamp the passport. Apparently that has to wait until San Pedro de Atacama. Next they sent me to the SAG officer who had me fill out the customs declaration but just looked at the bike and said go ahead. I asked him for some water and he ended up inviting me for lunch. He is here with his whole family (wife and two sons) for a week's rotation. He said the carabineros were permanently assigned here... man this has to be a tough post. There is nothing upon nothing around, and to boot hardly anyone uses this pass. In the winter it must be brutal. Lunch was beans with spaghetti, just what a cyclist needs!

The climb up away from the border post was vicious. The wind was howling down this hill with a vengeance, it took me about an hour to climb 4 kilometers. Lots of Vicuñas around. The descent into the next valley wasn't so fast either because the wind was even worse on this side. I stopped at the mining complex El Laco for some more water. It's a good 95 kilometers to Socaire and I don't know if there is any water to be had between here and there. There's nothing on my map at any rate. So after the miners' water I'm carrying 6 liters. Still not really enough to my liking but I'm out of bottles to fill.

5 kilometers past the mine I couldn't deal with the wind anymore. I was starting to worry about where I could camp that was out of the wind and out of sight of the road when a gravel pit appeared. It has cover from the road, and some cover from the wind but not as much as I would like. I was too tired to care. Set up the tent and immediately laid down for a nap. I can't remember the last time lying down felt so good... Got up later for dinner, it gets cold as soon as the sun goes down.