30 kms south of Pichilemu to Peralillo: Back to the central valley 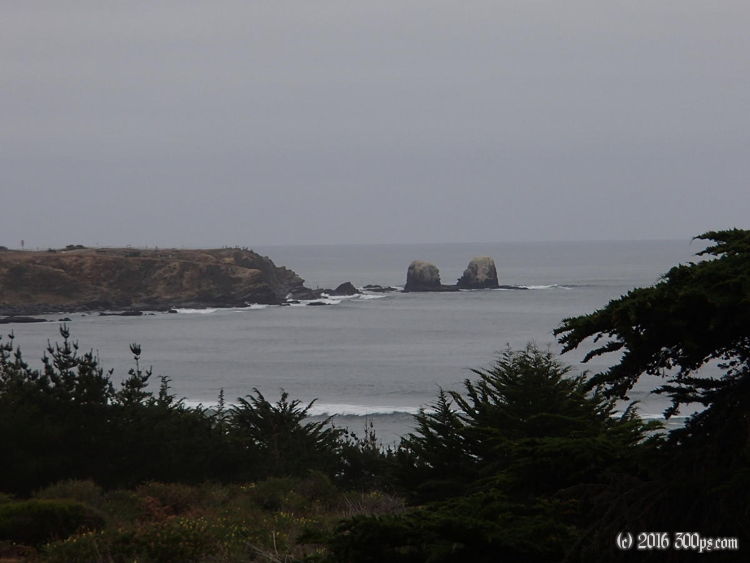 I was up and on the road by 9. I've been thinking about the general lack of wildlife in Chile/Argentina. When I camp in the US, and even in Europe, I frequently have night-time visitors: coyotes, marmots, skunks, squirrels, foxes, etc... Plus what you see during the day like deer and even bears. On this trip I have only had that one incident with a couple of foxes down near Coyhaique. Other than that I have only seen jackrabbits, a few rheas, and one skunk. Not a single deer. I wonder if that means everything has been hunted to near extinction?

I passed Punto de Lobos on the way into Pichilemu. This is a popular surfing spot, apparently it has a really long left to right breaking wave. An Australian friend of mine came here for 2 weeks just to surf it every day.

I made it into Pichilemu by 11 and headed for a café with WiFi to get on the internet. The pictures took a while to upload so I was there for an hour. I had been to Pichilemu before, in 2006. I went for a weekend with a German woman I met in Santiago. I never thought I would come back here, on a bicycle no less... Life has taken some strange turns. Nostalgia notwithstanding, it was time to hit the road. There is a 20 kilometer climb heading northeast out of town. On the way up I met José, a Chileno from Viña del Mar who is headed down the coast to Concepción on a mountain bike with an improvised trailer setup. We talked for a while about the road and what he can expect. He's having a tough time keeping the trailer attached to the bike, I don't know how he's going to get through the ripio sections.

As I got farther away from the coast the fog disappeared and it got hot. After a long descent into Los Alcones the road flattened out, I decided to just follow this curve to San Fernando and hop on the 5 into Santiago. I'm eager to get the business I need to do in Santiago out of the way so I can get back to the mountains. The coast was fun but I'd rather be closer to nature and farther from civilization.

In Peralillo I decided to call it quits for the day and get a room. I badly needed a shower and a shave, I hadn't had either since back in Buchupureo 4 days ago. I stayed at the "Happy Bar" pensión... not a bad place with hot showers, good rooms, wifi, and good food. I ate a big meal there then went out looking for snacks. I picked up an alfajor and a bag of chips at a market, then at the main plaza I saw a cart selling french fries... I couldn't resist. I ate it all at the park then on the way home I saw an ice cream store and... couldn't resist that either. Now I'm officially full and off to bed.