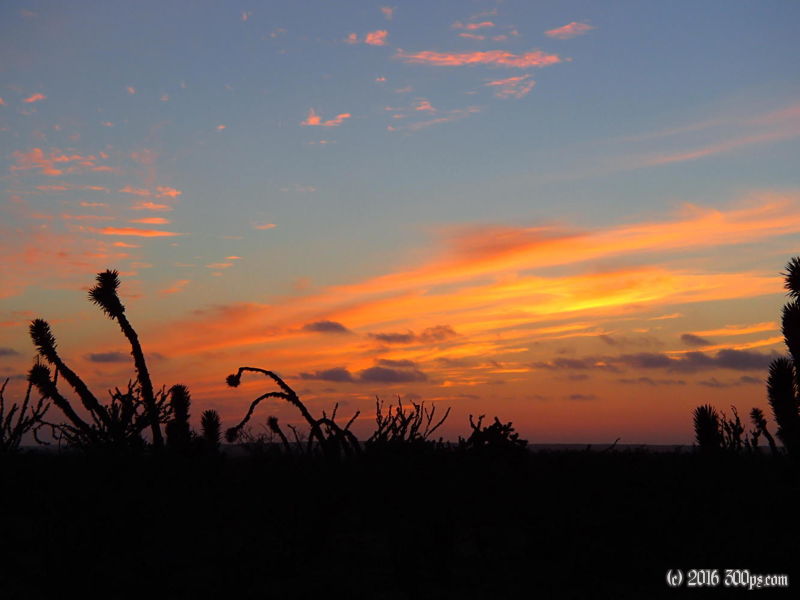 I am awakened by a coyote barking at my tent. The invasion of this foreign object into the otherwise uniform landscape appears to offend his sense of the order of things. I debate getting out to shoo him away but I’m too warm and comfy to move, eventually he tires himself out and moves along. After dragging the bike back through the sand to the road I am all hot and sweaty. I take my fleece off. 10 minutes down the road I stop and put the fleece back on, which is where it will stay for the rest of the day. I thought I might catch an early morning break from the wind but no such luck. It just keeps ramping up throughout the morning while driving my average speed inexorably downwards.

36 kilometers later I arrive in Guerrero Negro. It’s a dingy little desert town but it has what I need: internet, coffee, water, and food. The food part is a bit of a struggle. I go to three markets to cobble together a couple of days’ worth of food. I have the wind at my back for a glorious 4 kilometers as I ride east out of town, then I get on the highway going north towards Ensenada. So begins a slog reminiscent of Patagonia. The wind is whipping out of the northeast, hitting me at about 10 o’clock. I have to lean the bike into the wind in order to ride a straight line, it mostly works except for when the occasional gust catches me by surprise and pushes me off the road. A truck passing in either direction causes chaos: the drop in wind when a truck passes going south sucks me out into the lane, while when a truck is passing me from behind the resulting whirlwind makes me scramble to keep control of the bike. I lose my hat a few times from all the crosscurrents. I take a break every 10 kilometers to keep my sanity.

Late in the day I come across a little town called Valle Jesus y María. They have a better shop than what I could find in Guerrero Negro. I buy a few things, play with a friendly dog outside for a while, then ride far enough out of town as to be discreet before heading off into the desert to camp. The cacti are back in force on this section of road so there is no lack of cover. I find a stand that will block most of the wind, set up camp, then make dinner in the atrium again. This time I figure out how to unhook the inner tent to give myself enough space to operate. It should work pretty well in the rain, the scenario that I was most concerned about with this tent.

Word for the day: eslogear v.i. to slog, to struggle

(This fucking wind has had me slogging all day long.)

(No way dude, what a fucking slog.)

(I hope Baja California isn’t too much of a slog).