Laguna del Laja to Los Angeles, Chile: From one planet to another 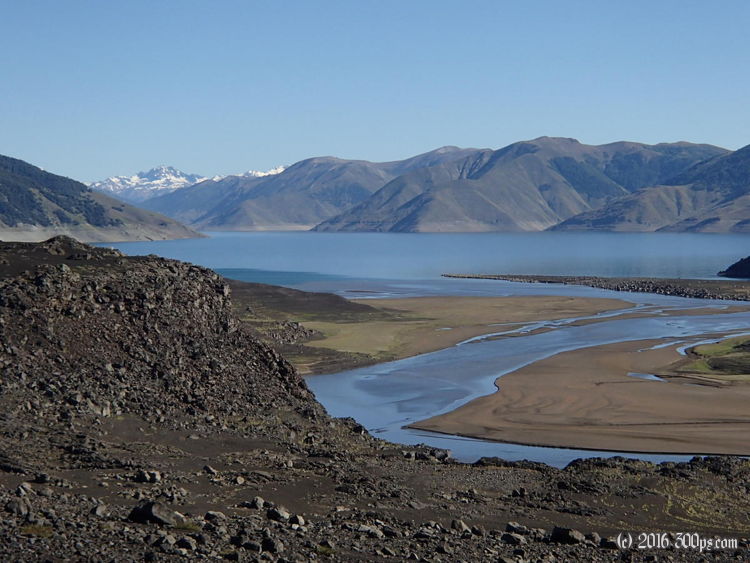 I got up and ate the leftovers from last night. Now I was completely out of food, but I only had 30 kilometers to go before the first town in Chile. Incredible scenery again this morning along the Laguna del Laja. For a five kilometer stretch there were headstones like graves from the Chilean army that had a soldier's name, the date (May 18, 2005), and that they had died in the line of duty. Some were alone off the road, others in clusters of 5 or 6. I was really wondering what had happened here until I got to the exit of the valley where there is a big monument that tells the story: on that day 45 soldiers left the garrison next to the border checkpoint to go home. They were not carrying appropriate gear for the blizzard that hit them in the Valle de la Luna, they were caught in a white-out and buried under two meters of snow. They all died. You really feel the impact of what happened when looking at the headstones spread out over this vast moonscape of volcanic rock. They must have struggled in ones and twos and little groups until they were overwhelmed by the snow. The monument says it took three weeks to find all of the bodies.

This valley is one of the most beautiful landscapes I have ever seen. The ride through this Pichachén pass was tough but well worth it. Once out of the valley there is a long descent, about 20 kilometers, dropping a net 600 meters. 15 kilometers from Atuco the pavement reappeared. For the rest of the day I was just cruising. The strong headwinds were cancelled out by the long, slow descent; from Atuco to Los Angeles the altitude drops from 500 or so meters down to about sea level.

Outside of Atuco I saw a sign for a restaurant that had WiFi. I was completely out of food so I decided to check it out. They were having a meeting in the restaurant but the owner set me up outside at a table with a delicious lunch. He sat and spoke with me while I ate. When I said that the Laguna del Laja was a beautiful spot he said it used to be even more beautiful. In the 60's they built hydroelectric tunnels to drain the lake and generate electricity. Since then it has lost over 20 meters of depth, the lake used to extend all the way to the border post. He also said that the main tourist season here is the winter when people come to ski on the volcano, but that this past winter it didn't snow at all. I asked if that had had a strong effect on the local economy and he said no, most of the people living in the area are mining engineers that work in the area and other parts of Chile, or professional people from the coastal cities that have part-time houses here or who have opened tourist businesses that are not their main source of income.

The waitress was really funny; she served me as if we were at the Ritz... everything yes sir no sir please sir. She thought I was Argentine until I signed their guest book that I was from the US. My Spanish must be really kicking butt after this month of virtually no English. The meal and the conversation was exactly what I needed after two days in the mountains. I highly recommend this ride, it's a tough challenge, particularly going east to west, but the remoteness and the scenery make it all worthwhile.

After Atuco the landscape changes to endless pine plantations, then fields of sunflower, soy, and vegetables. It was hot and windy, when I got to Los Angeles I was ready to rent a room. I withdrew some pesos from a bank, asked a cabbie where to find a cheap room, and he directed me to a place right around the corner. It was cheap alright, but clean, and the woman working there is a bit of a nut but friendly. She told me to hide the bicycle in the room otherwise the owner would want to charge me 2 dollars for it to spend the night.

I took a badly needed shower and had a shave, then headed out to find food. It was surreal being in a bustling city after 2 days in the mountains, I felt like I was on one planet in the morning then on a different one in the evening. I found a Chinese food place for a change of pace. They had WiFi so I could update the blog. Tomorrow I will need to shop, find some fuel for the stove, and map out a route to Santiago. I'm debating on whether to head straight there or check out the coast. I went to Pichelemu back in 2005 and really enjoyed it so maybe I'll head over there. At any rate I've got the laundry problem again... the lady at the hospedaje said she only knows of places that do it for you, no self-service laundries around, which means more downtime waiting for clean clothes unless I can find something else. Argh! Stymied by laundry again! I'm completely rancid at this point though so it is unavoidable.