23k south of San Ignacio to Peru-Ecuador border: Out of Peru at last 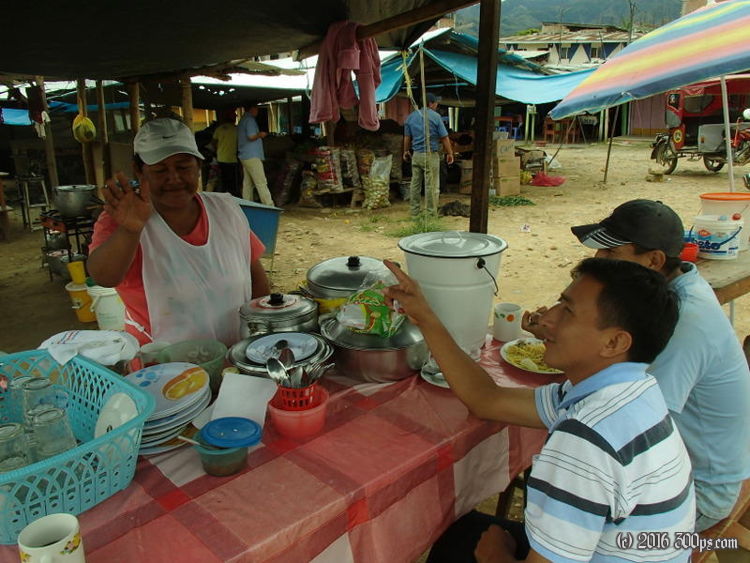 It was 10k from the campsite to a small pueblo where I had breakfast and answered a barrage of questions from the restaurant owners' 7 year-old son. Breakfast consisted of fried meat and yuka. From there began an 800 meter climb towards San Ignacio with a healthy dose of mud and construction work. I had to keep stopping to clear the mud out from under the front fender. I made it into San Ignacio around 12:30, did some shopping, then headed to the market for lunch. I had a spirited discussion about racism with the owner of the lunch stand and 2 guests. When I met the Irish cyclist yesterday he said that he understood hardly any Spanish and that when people yelled stuff at him he just smiled and waved... I think a total lack of Spanish is a big advantage in Peru (and Bolivia), if you know what people are saying it's ugly. At any rate I'm almost out of this country and I doubt I will be back.

Another big climb out of San Ignacio but part of it was paved. At the border the exit stamp process was a no-brainer. When I crossed the bridge into Ecuador it was already getting dark, so I asked the Ecuadorian police if I could camp there. They said no problem, I could set up in an unfinished building next to the police station. They stamped me into Ecuador then I spent a while shooting the shit with the policemen. It's a pretty dead border crossing. No one else came through except for a Colombian guy on foot who told the cop a long story about how he had lost his papers. The cop just said "I never saw you" and waved him through... Later on when I made dinner it became a big event. All the police and customs agents came over and watched me, fascinated by the stove.