2 miles south of Boulder to Main Canyon (FS 17): Haven't talked this much since Mexico. 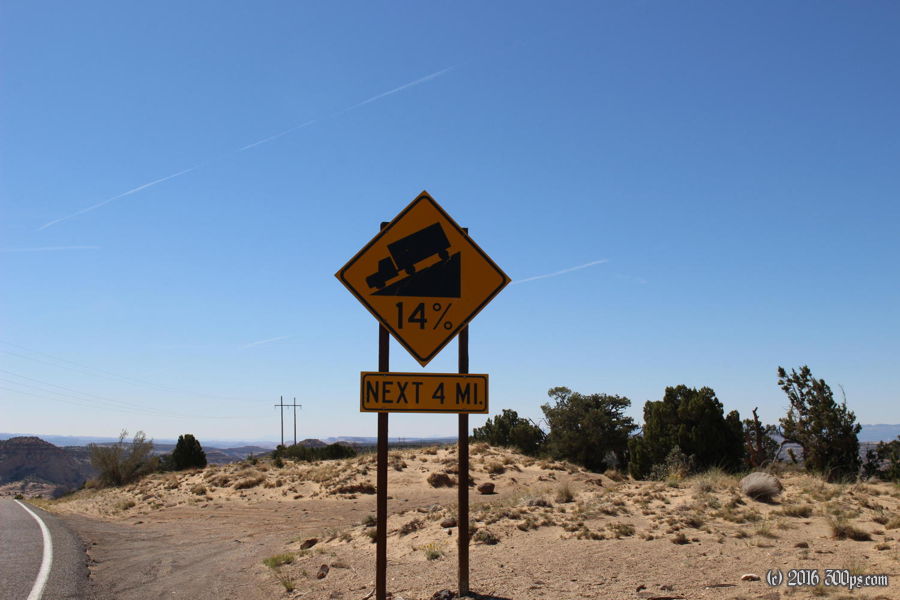 The moment I open my eyes I decide I'm going to take it slow today. I break down, have some breakfast, then I'm back on the road in only my shorts and shirt; it's a lot warmer today. Not much wind either (for now).

I run into a guy touring from Bakersfield, CA to the east coast; he confirms my suspicions that I'm on an ACA route. I ask him how he likes his BOB trailer. I'm fascinated by those things.

I continue on down through some pretty canyons, then start climbing back out. I come across a coffee shop where I stop to get a cup and use their WiFi. A couple of German guys from Köln come in and ask me about my bike, they join me at my table and we chat for an hour about traveling and cycling. Nice to have some company.

I´ve got some more climbing before the descent into the town of Escalante. At the top a woman yells encouragement from atop a cliff, then when I round the bend I see two loaded bikes. A guy comes down to talk. He is from Belgium and, small world, he is friends with the two Belgian cyclists I went out with one night in Cusco, Peru. He actually picked up his panniers from one of them. He and his friend are on a 10 month trip that started in Boston and will end in Vancouver.

Next I hit the town. First stop is a visitor center where I talk to two veterans about the back roads around here. They have a few suggestions. Then I stop at a home-improvement type store to get some electrical tape. I end up staying for half an hour talking to two gentleman who know the area well about possible routes. I ask about bears at the higher elevations because I'm not carrying any rope for a bear hang; I'm told they aren't active yet so no need to worry about it. Good news, the rope can wait until later. I leave armed with some good ideas for the next week.

I get some lunch at a diner. I get to talking to a mother and daughter from Idaho here to camp and hike. When I leave I stop at BLM/Forest Service/Visitor Center on the way out of town. It turns out to be closed but I run into the mother/daughter pair again and they have detailed maps! They let me take pictures of them for reference. They are staying out at the Petrified Forest campground, they say it's really nice but already full for the day. I'm headed out to the National Forest anyways, which doesn't take me too long, the exit I'm looking for is only about 5 miles outside of town. I ride up a dirt road in a canyon for another 5 miles before seeing a good place to camp down by the stream.

First thing is to jump into the stream to wash off some filth before the sun goes down. It is cold, but on the 300ps Mountain Stream Bathing Scale of Pain and Suffering it only scores a 4 out of a possible 10. I set up, have a small fire just to boil coffee (that's my rationale anyways, the coffee I'm carrying sucks, I just want to have a fire). Since I had a late lunch I make a sandwich instead of cooking. Easy day today but I enjoyed it. I haven't spoken this much in a day since Mexico!