Sacred Rocks to 3 miles south of Calipatria: Blown away 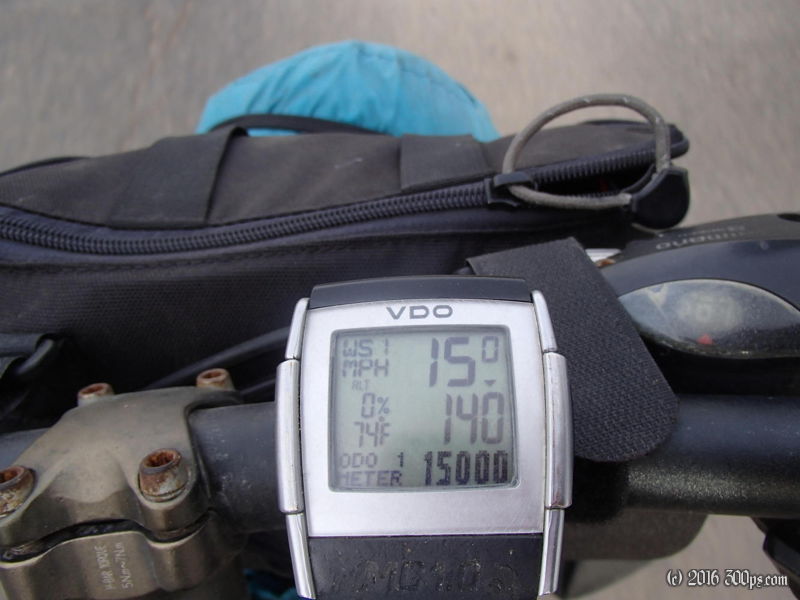 I awake to rain beating down on the tent. It’s been so long since I’ve had rain I had kind of forgotten about it, the last time I had anything serious to contend with was way back in Oaxaca in December. I hang around hoping that it will stop, making a breakfast of pancakes in the meantime. When I was in San Diego I figured I would expand the breakfast menu given that I will have some long stretches of camping.

I fix a flat on the back tire. I find a piece of metal embedded in the rubber but I have no tweezers so I can’t get it out. I end up putting a tube patch over the spot on the inside of the tire. I spend some time fiddling with the front brakes to get rid of the screech that has developed over the last few days, it works but I will need new pads soon.

The rain does eventually stop. I get on the road at 10am but it hasn’t warmed up much, still in the mid 40’s. The wind is ripping out of the west. Good news for me. I stop in Jacumba at a restaurant looking for coffee. I end up talking to the owner or manager for a while, his name is Jesús and he is from Mexicali. He gives me the coffee for free, nice guy. Since this section of road is on the ACA Southern Tier he sees lots of cyclists, he says a woman went through the other day on her way from San Francisco to Miami. When I tell him about my trip he says I am like Don Quixote… the analogy is apt with the plethora of dust devils out there today. I take my leave and ride the 5 miles up to the junction with I8. Part of the road is under construction and I get an escort by a pilot truck. Then comes the glorious 3,000 foot descent. I have to stop a few times to retrieve a couple of things that blow off from the crosswinds: a water bottle and my hat (I’m beginning to the my hat wants out of this journey, he seems to take off whenever he gets the chance. Don’t leave me now bro, we’ve been together since Colombia!). I hit 51.5 miles per hour on the descent.

The wind blows me all the way into El Centro where I stop at McDonald’s for WiFi and a burger. The woman sitting in the booth behind me chats with her boyfriend on the cellphone about her court case. The landscape changes from desert to farmland, I suppose it has been reclaimed from the desert, with the requisite John Deere dealerships and other trappings of rural American farm communities. I was hoping to make the Salton Sea today but my late start makes that look unlikely. The wind doesn’t help from here on out either. I make a turn due north from El Centro which means the wind hits me dead at 90 degrees, making it quite a struggle to get past Brawley. I run out of daylight about 3 miles before Calipatria, when I see a wildlife reserve I pull in and find a spot to camp. Lots of birds in this area.