Alto Jagué to 10 kilometers south of Villa Castell: More amazing scenery, a long wait at immigration, and that damn rack won't stay together 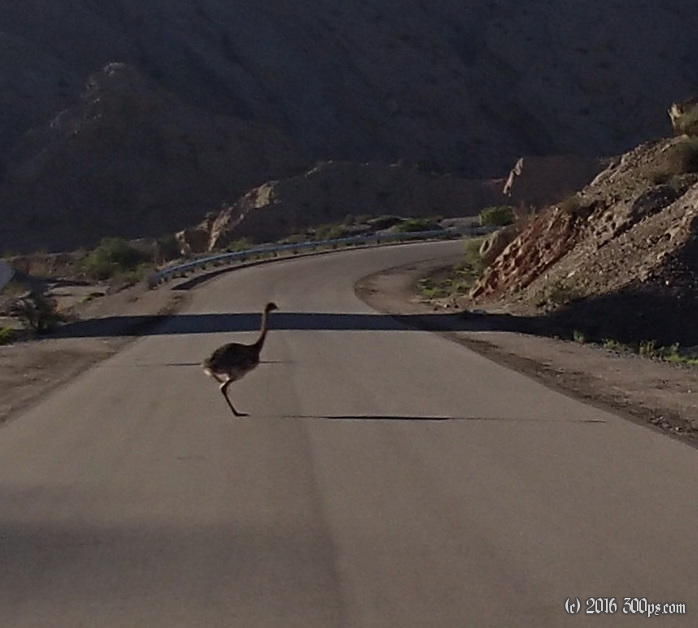 I got up and out of the wildlife place early. I don't like camping like that in a town with people around. I was on the road by 7am, I talked to the same agents at the checkpoint on the way out. The AFIP guy wanted to know why I was doing the trip and said he admired me. He said that yesterday he had seen a woman running with a chest harness trailing a cart, he assumed she was European or American and was travelling some distance. I didn't get a chance to ask him where he had seen her because a car pulled up and they had to go to work.

I figured that today would be a boring ride through pampa but I was completely wrong. After Jagué the road dives down through a river canyon that reminded me a lot of Arizona. A couple of rheas (big flightless birds, I don't what this species name is, it's not like the rheas of Patagonia) ran out across the road in front of me at one point. The road was ripio, in bad shape, and my back rack came apart again. I was sick of dealing with it so I just took air out of the back tire until it would clear the rack.

I reached Vinchina at around 10am. There was a huge line at immigration. I ended up waiting there for an hour and a half until they could process me. I passed the time talking to everyone waiting; there were Paraguayans headed to Chile, Chileans headed to Argentina, and Argentines headed to Chile. The immigration process is ridiculously slow. There was only one gendarme working and he had to fill out a form for each and every person plus more forms for the vehicles. I hope they enter the information age soon... The Paraguayan family in front of me had the wrong forms from Chile and the gendarme made them drive into town to make photocopies of everything. I was nervous as hell when it was my turn... hoping I had the right form. Every time I cross the border I end up with a different form so it was anybody's guess if I had the right one or not; and I did! Phew... But it turns out I had what the gendarme called a "non-standard" exit form, but he stamped it anyways. A French guy I met on the Cristo Redentor pass had told me about a cyclist on Paso San Francisco who got rejected by Argentine immigration because he was missing a stamp... they made him go back over the pass to get the stamp! I would have said f@ck you, I had no food and there was no way I would go back... But fortunately I didn't have to create an international incident as my papers were mostly in order.

I went into Vichina to get some food and look for coffee. I found food but no coffee. I was eating a sandwich near the bus station when 4 drunk guys pulled up and latched on to me. It was noon and they were still working on the previous night's jag. Shit. Then 4 more came by on scooters, one carrying an open box of wine while driving. It took 20 minutes to get away from them... I seem to be a drunk magnet on my bicycle.

The ride for the rest of the day was hot, flat, and with serious headwinds. At Villa Castell I looked around for some food but everything was closed as it is Sunday. About 10 kilometers past the town I decided this was silly and just packed it in; I had been riding all day on an underinflated rear tire, the headwinds were ridiculous, and it was desert hot. This area is stealth camper's delight: pampa but with big enough trees to block the wind and keep out of sight. It's poor earth so it's noman's land.

I spent the extra time (I stopped at 4:30) rigging up a new hack for the broken rack and shaving (it had been a long time since the last shave....)

After I made dinner and got into the tent heavy thunderstorms rolled in. It's raining cats and dogs right now. I was worried about the tent for a few minutes but it seems to be holding up nicely. After the rain stopped I got out of the tent to watch the storms drift off to the east. Spectacular light show.