Torrey to 2 miles south of Boulder: I must be on an ACA route 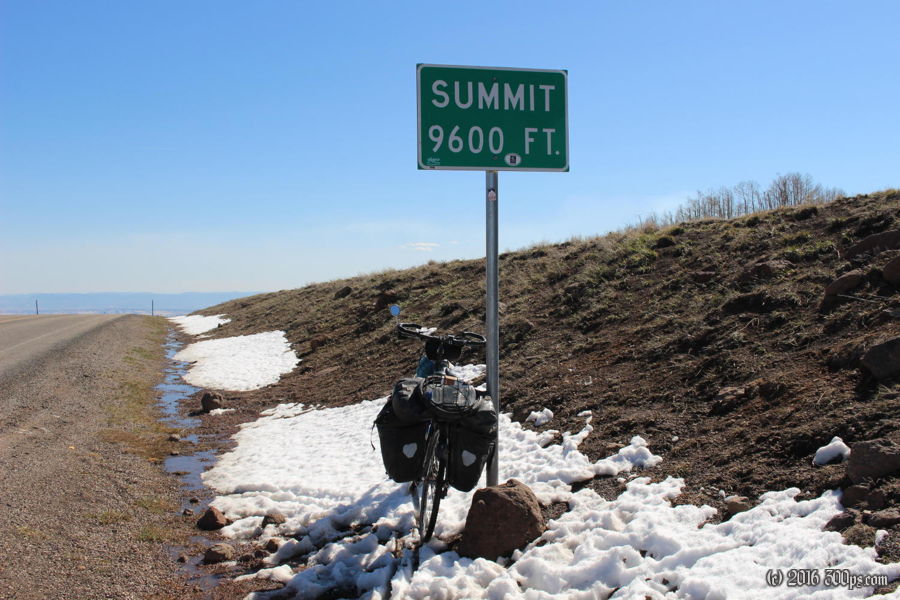 I sleep in late to enjoy the bed. On the way back through town I stop for a coffee and a chat with the two ladies working there. They tell me Boulder is smaller than Torrey so better to get supplies for the night here rather than there, which I do at the general store. I also make a stop at the visitor center to see if I can get some maps that extend farther south but I already have what they offer me.

When all is said and done I don't start riding south on 12 until after 11am. The next 5 hours are chewed up by a big climb from about 6,800 feet in Torrey to 9,600 feet at the summit, pretty much continuous except for the occasional dip. It feels easy after all the sand I've been dealing with lately, just a question of patience until I slowly make my way to the summit. Near the top I see a girl on a loaded bike coming down. She shouts words of encouragement as she goes by.

There is some snow at the top but not as much as I would have thought. The south facing slopes are pretty much clear. I stop at one of the overlooks on the way down and meet a kid from New York who started in San Francisco and is heading home. He says he badly needs a new rear tire, I recommend Loa because there is nothing in Torrey and even less going east until you get to Grand Junction, or south until Flagstaff unless he detours to Moab. Later it occurs to me: I must be on an ACA route. 4 touring cyclists in two days is too much of a coincidence. The route must go down towards Hite because that's the way Dave and Cathy were going. After that I have no idea.

There is a strong, cold headwind on the way down to Boulder but the lower elevation starts to offset the wind in terms of temperature. I stop at a store and get talking to a lady, I ask her about camping, she draws me a map of a place on National Forest land a few miles south of town. I check it out, it's got a fire ring and some protection from the wind so I set up shop. This is the kind of place that I never would have camped at when I crossed the U.S. in 2010: it is only about 500 feet from the road, someone could easily drive in, a fire might attract attention, etc... but these days I've calmed down a lot with the paranoia about getting found camping. At least in the west it's really no big deal.

I enjoy a big fire, cook dinner on it, then it's lights out.