He says he was there clearing land mines -- on his own, not for any NGO -- until he got picked up by Hezbollah... 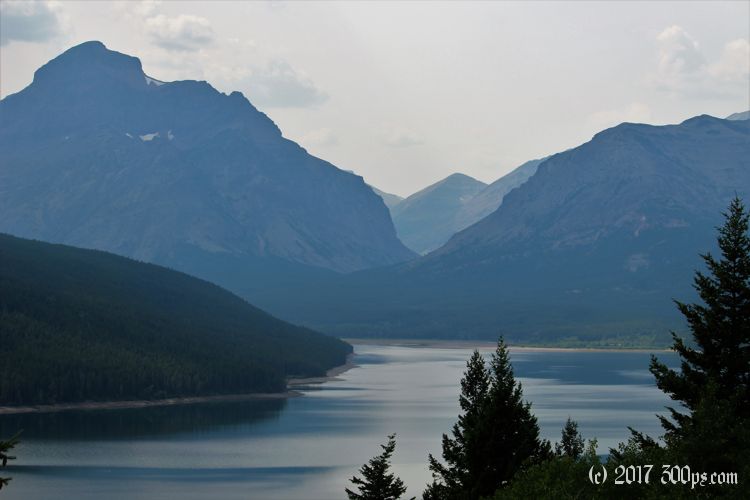 The Going to the Sun Road is a must-see when visiting Glacier, so off I go to ride it today even though I suspect it will be packed with tourists.

Well... it is packed with tourists. I slowly make my way up to Logan Pass, usually waiting behind a long line of cars. It's hot and the air is smoky from the fires; all in all probably not the best day to be doing this ride. I suspect sunset hours would be better but I've got that headlight problem...

The best riding of the day happens when I get out of the east entrance to the park. The roads south to East Glacier twist and turn, rise and fall; I've got a big smile on my face by the time I'm on the main road back to West Glacier.

On my way back through West Glacier I need to stop for gas again. Not often that I fill up, ride all day, then have to fill up again at the exact same gas station. The hitchhiker is still there in the same place, it's been 3 days now (since I've known he's been there, maybe it's been longer). I decide to go talk to him to see what he's up to. His name is Wynn, he's been traveling around since 9/11 when he left his regular job. He can talk like no tomorrow... He tells me a long story (and I mean long) about Lebanon. He says he was there clearing land mines -- on his own, not for any NGO -- until he got picked up by Hezbollah. His gig at the time was to show up in a village that had a mine problem with a letter of introduction written by Arabic by a friend of his. It said he would clear mines for room and board; and explained who he was and where from, etcetera... Apparently he did this for quite a while until armed men from Hezbollah handcuffed him, blindfolded him, and took him to a sort of jail where they interrogated him for 10 days. He says he got preferential treatment; he had his own cell whereas the other "prisoners" slept along the wall of the corridors. The guards would come by periodically and kick them to wake them up. After 10 days they decided that Wynn wasn't any kind of spy or government operative, then they drove him to the Syrian border and told him to stay out of Lebanon. He's clearly eccentric, some might say crazy, but I believe him. He's into God and starts to tell me about the physics of the universe... at that point I make a break. I'm hot, tired, and I've got another 20 miles to ride -- some of it on gravel -- to get back to my campsite before it gets dark. I wish him luck and go on my way.