Standing on the edge of this sheer cliff overlooking the river it seems impossible that a trail could lead me down there, but it does, by means of traversing a few shelves in the mesa, then a long, snaking path heading south across the face of the rock until it reaches an amphitheater that has enough of a slope for a switchbacking path downwards... 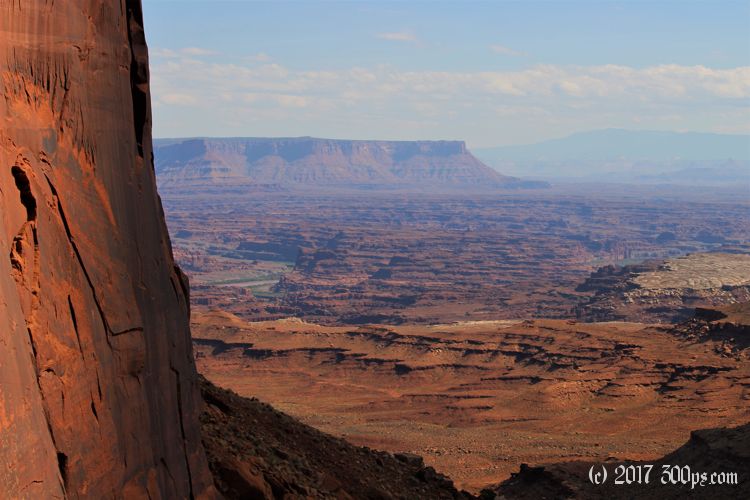 It rained softly for much of the night but the weather report says clear today, if hot. I take a walk on some trails in the vicinity of the campground, some intended for mountain bikes, some for hiking. I've noticed that a number of campers seem to be here specifically to ride these trails; they get up early and head directly out of the campground onto the trails with their bikes.

I'm off to try another hike called the Lathrop Trail. The trailhead is right on the main park road, a few miles of fun, twisty turns after the visitor center.

The first couple of miles of the trail cross the plateau before reaching the edge of the cliff that overlooks the Colorado River. This entire part of the park, Island in the Sky, is a huge mesa bordered on one side by the Colorado River canyon and on the other by the Green River canyon. Today I'll be hiking down off of the mesa to White Rim, a sort of canyon within a canyon that encloses the river. It's about a 12-mile round trip to White Rim or a 22-mile round trip to the river itself. The 12-miler seems like the reasonable thing to do, 22 would require an overnight.

Standing on the edge of this sheer cliff overlooking the river it seems impossible that a trail could lead me down there, but it does, by means of traversing a few "shelves" in the mesa, then a long, snaking path heading south across the face of the rock until it reaches an amphitheater that has enough of a slope for a switchbacking path downwards. It is quite steep at points, almost but not quite scrambling. I can see it's going to take some work to get back up.

Once I'm out of the amphitheater the trail flattens out; following along, then in, a wash for a couple of miles to White Rim.

A dirt road runs along the edge of the rim. I see a few dual-sport motorcyclists and some mountain bikers on it. I considered getting a permit to ride this road but now that I see it I'm glad I didn't: it is pretty rough... too rough for Greta.

On my way back I run into two hikers coming down. They ask how far it is to White Rim. 2 miles I say. I detect a familiar accent... I switch to German. I ask if they have enough water; they don't look prepared. Ja, they say, they've cached bottles for the way back. They are concerned it's too late in the day to go all the way to the rim and back. I reassure them, but warn that it will get cold as soon as the sun goes behind the cliff. The woman is in a jogging outfit with bare midriff. I tell them I speak "Volkshochschuledeutsch, top niveau" (continuing-education German, the highest level). They get a kick out of that. I see their water caches on my way back up the cliff. I leave a packet of Propel (that electrolyte powder) next to one of their bottles. I got such a shitty reception from people when traveling in Germany I feel like making a kind gesture.

It is some work to get pack up the cliff. I'm panting and sweating heavily by the time I reach the overlook. I eat the last of my food, drink the last of my water, and make the final flat trek to the motorcycle in good spirits.

I'm making dinner again in the tent -- third night in a row -- this time because of heavy winds.