They logged one strike that turned into a fire 18 days later... the forest duff had ignited, then crept along smoldering until it hit a dead tree then pouff: forest fire... 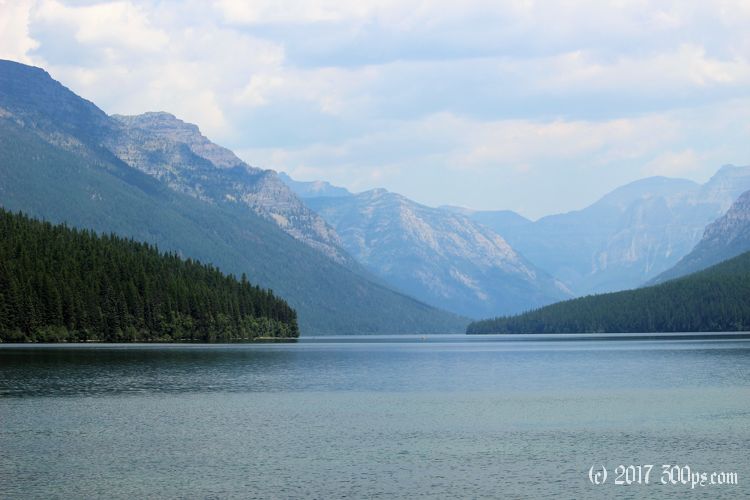 I pack up my free bush campsite in the morning, then head to Big Creek campground to see if I can get a site so I can go hiking. I ride around the campground but everything looks reserved. A guy named Paul flags me down, says he is leaving, and asks if I want to take it over. Why yes! Apparently the site was reserved for this week but the person never showed up; so Paul had it for a few days, now I can have it for a few more. I clear it with the camphost, a 30-something man who is always driving around in a golf cart. He is the youngest camp host I have ever seen. In fact, I think he is the only camp host I have ever met who doesn't have grey hair.

I chat with Paul while he packs up his gear. He is from Butte, MT and says he knows the park well. I ask him if he knows of any good hikes, he doesn't hesitate: Numa Ridge. He says a lot of the other hikes are chock full of people this time of year but the Bowman Lake area is remote and the Park Service controls how many people go up there. He says I'll probably be able to get in because I'm on a motorcycle, but the road is rough. I'm game... what's a little more gravel at this point?

The road up to Polebridge is some gravel, some packed dirt, and some pavement. All in all not too bad. After Polebridge it gets ugly, though. At the park entrance the ranger says the Bowman Lake lot is full but they might let me through. Worth a shot, I've come all this way. The road gets really jarring. It is packed dirt and rock, Greta hates it. We're bouncing all over the place... I wince every time we hit washboard, just hoping this abuse doesn't make Greta fall to pieces. I'm driving at about 10mph most of the way; I never run into anyone on the road who would "let me through" or not so I just keep going until I eventually get to Bowman Lake. I fit the bike into a sort-of spot in the small "backcountry parking" lot. There are only a dozen cars there.

Bowman Lake is spectacular. A long, thin stretch of bright blue and silver water set against a backdrop of towering mountains. I sit on a beach for 10 minutes just to soak it all in. Then it's time to go, it's already early afternoon and I don't want to be hiking back in the dark.

The trail follows the west side of the lake for a mile, then the path for Numa Ridge splits off to the northwest. Easy at first, then progressively harder as the path makes its way up the mountain. I pass a few people coming down. One couple has bells attached to their backpacks. Another guy has a sort of holster with cans of bear spray on each hip. Looks kind of silly but I should probably be doing the same. In lieu of a defensive weapon or bells, I sing Quebecois folk songs. That should scare away any bear in his right mind. I only know a couple of tunes... maybe I should work on expanding my repertoire to not bore the local wildlife to tears.

At about 3 miles it starts to get steep and the switchbacks begin. The forest gives way to grasses and scrub trees clinging to the side of the mountain. The summit is large expanse of barren rock with a small two-story structure plopped right in the middle. I can hear someone inside talking on the phone. I pass by and continue down the other side of the ridge until I find a good place to rest, drink lots of water, and wolf down a couple of sandwiches.

As I'm passing by the firetower, about to head back down the mountain, a guy yells down asking me where I'm from. His name is Fred, he is the resident of this tower, and he invites me up to explain what he does. This is one of 7 manned towers in Glacier National Park. They watch for lightning strikes -- "downstrikes" as Fred calls them -- and try to pinpoint their location. Fred lives, sleeps, cooks, and works on the top floor of this small building. There are windows all around, giving him a 360 view of the mountains. When he spots a downstrike, he uses a sighting table with a map of the park to line up where he thinks the strike occurred. The table has a ring around it with degrees from true north, he then gets on the phone with the other towers and they try to triangulate the position of the lightning strike. They log all of this data (and there is a lot of it, Fred says they track hundreds of strikes each season), and provide it to ground crews and pilots to check for fire at the location of the downstrike. They logged one strike that turned into a fire 18 days later... the forest duff had ignited, then crept along smoldering until it hit a dead tree then pouff: forest fire. Amazing that it could simmer for so long. I take my leave because it's already 5pm, it will take me two hours to hike down then I've got that long dirt ride to get back to camp before the sun goes down (which I don't want to do in the dark without a headlight).

I rush back down, hop on the bike, and drive as fast as I dare back out through the park. A quick stop at the Polebridge bakery then on to camp. I drop my stuff and jump in the freezing cold river. It feels great after a long, sweaty, dusty day.