I'm going counter-clockwise, the first 3 or so miles are a descent down washes and then a canyon, the beginning of which is marked by spectacular rock pillars of roughly the same height on both sides, like goalposts... 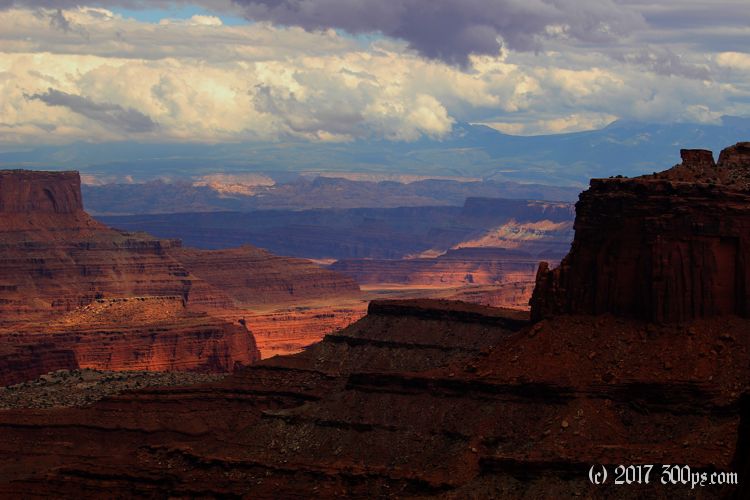 I'm not in the mood to break down camp this morning; I'll leave my stuff here and go hiking instead of trying to get a back country permit. More storms are in the forecast for this afternoon. After yesterday's hail attack, I'm paying heed to the weather report. I pick a longish hike from the list of trails on the back of my park map: Syncline Loop.

This trailhead is area is packed with people but they all seem to be here for the short hike up "Upheaval Dome" because I don't run into anyone on the trail until I'm near the halfway point.

I'm going counter-clockwise, the first 3 or so miles are a descent down washes and then a canyon, the beginning of which is marked by spectacular rock pillars of roughly the same height on both sides, like goalposts.

I run into a wall of rocks, the trail scrambles over and down them, then the canyon opens up wide. I see my first hiker of the day coming up the other direction. He's huffing and puffing, I'm definitely getting the easier part of this particular scramble by heading counter-clockwise on the trail. I wonder what awaits me on the other side, there will be at least the same amount of elevation gain to get back to the trailhead.

The heat ratchets up a few notches in the open canyon, there is no more hiding from the sun. I'm burning through water but I left with 4 liters so I should be fine.

At the midway point of the trail there is a spur that goes up to Upheaval Crater. I consider it but it's a dead-end up-and-back deal that would add 4 miles and who knows how much elevation to the hike. I'm not feeling up for it knowing I've already got a significant climb ahead of me. Another trail branches off from the same spot that goes down to the Green River. I would have to have all my gear and be ready for an overnight to take that one. I continue on the loop. Somehow I get off trail for a while by follwing a wash for too long, I missed the "exit". It's not hard to get back on track though, the path has to be heading up the same canyon and all I have to do is cross towards the other side until I stumble upon it again.

The last two miles are a very stiff climb back up the canyon wall(s). It's not a scramble though like the other side, here a rough staircase has been fashioned for most of the way. Nevertheless I'm thoroughly knackered by the time I get to the top. The views looking back down the canyon towards the Green River are spectacular. I keep turning around to snap another photo, I end up with about 20 of the same view from different elevations but I pare them down to just one:

True to the weather report, I can see ugly storms forming off to the west. I stop at the Green River Overlook to snap a few pictures but I'm not dallying.

A half hour after I return to camp the rain starts. Some gusts and a few downpours but no hail and the thunder is farther away; nothing like yesterday. Even so I'm confined to the tent for most of the evening.