Hat Rock to Hell's Canyon: What the F is Farkel?

Gary's ride recommendation turns out to be excellent; and three motorcyclists teach an old dog a new trick. 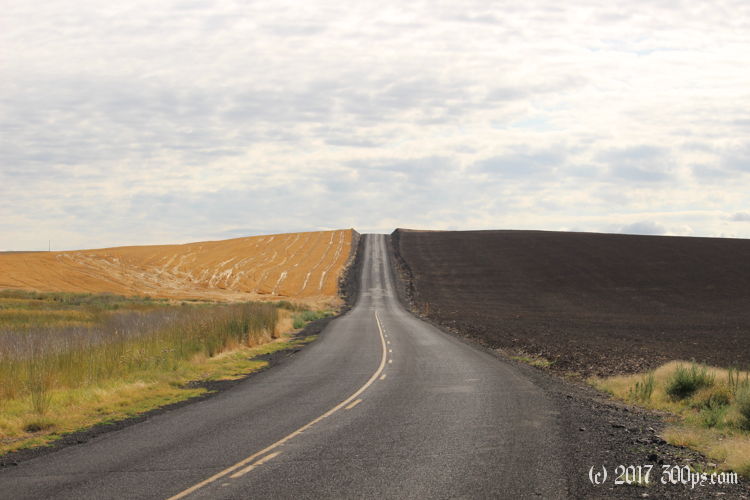 After breakfast burritos and coffee, Gary maps me out a ride through the mountains today. It doesn't dissapoint. Just a few miles from Hat Rock I'm zipping along a canyon headed east, nice long curves and no one arround to cause me to moderate my speed.

Then I'm up onto prairie land, looks like wheat growing in every direction. I stop in a town called Athena for gas. I put in my credit card, open the tank, I'm already to pump when a woman comes out of the store and says: "I'll do that for you."

"It's the law in Oregon that an attendant has to pump the gas."

"Well", I say, "I'm just going to go ahead and pump and we won't tell anyone." (the last time I let someone fill Greta the guy ended up soaking the tank with gas).

"Okay", she says, "thanks for stopping".

I've never heard of a state mandating that people can't pump their own gas. Strange, I don't see the logic there. After a quick look around I see why the woman thanked me for stopping. This town looks like it has gone out of business, destroyed by some nearby Walmart maybe. Too bad, the main street has some nice (if delapidated) architecture.

I'm up high into the mountains for a while. When I come back down I stop for a coffee in a small town. I get to talking to the owner about my motorcycle and how I had to change a switch the other day. He tells the story of his 1930's-something Ford tractor that sat for two years because no one could figure out what was wrong with the ignition.

At Enterprise I fill up on gas and food. I'm headed up into the national forest then down to Hell's Canyon. I notice that things are getting progressively busier as I near the eclipse totality zone. I hope the canyon isn't too packed...

The canyon overlook is pretty cool. They say Hell's Canyon is the deepest gorge in North America, even deeper than the Grand Canyon. Not quite as spectacular though. I drive back down to one of the nearby campgrounds and get a spot. I'll hang out here until the eclipse is over, maybe do some hiking tomorrow.

In the evening three motorcycles pull into the campground: a BMW R1200GS, a Triumph 800 dual-sport, and a Yamaha dual-sport. They invite me over to play "Farkel", a dice game where you roll six die and accumulate points. I'm simplifying there... bit of a learning curve so needless to say I don't win, but I don't lose either. They are from what they call the "Tri-City Area", Kennewick (where I bought my tent), Richmond, and another city I can't remember the name of. They tell me the story of Hanneford Nuclear Site where one of the first nuclear bombs was developed in the 40's. Richmond was built from the ground up to house all of the government workers on the project. Their parents (these guys are in their late 50's) originally came to work on the nuclear stuff. Fascinating to hear the human side of Hanneford. It was something I remembered vaguely from school, but it was just an abstraction, these are the children of the people who actually built the first bomb. History in the flesh. I remember having this same kind of feeling when I rode my bicycle past White Sands: there it is, that's the place they actually set off the bomb.

They are headed to a mountain about 150 miles from here that one of them has already scouted out as a place to watch the eclipse from. I take my leave around 11pm and fumble my way back to my campsite. Forgot to bring a flashlight. The stars are amazing, a twinkling canopy above the tall pines.