They are drawings on the cliff wall made by an ancient indigenous group. I saw a few of these over in Capitol Reef when I travelled through the area by bicycle in 2014; they've got that same blocky, almost humorous style of say a young teenager doodling during math class... 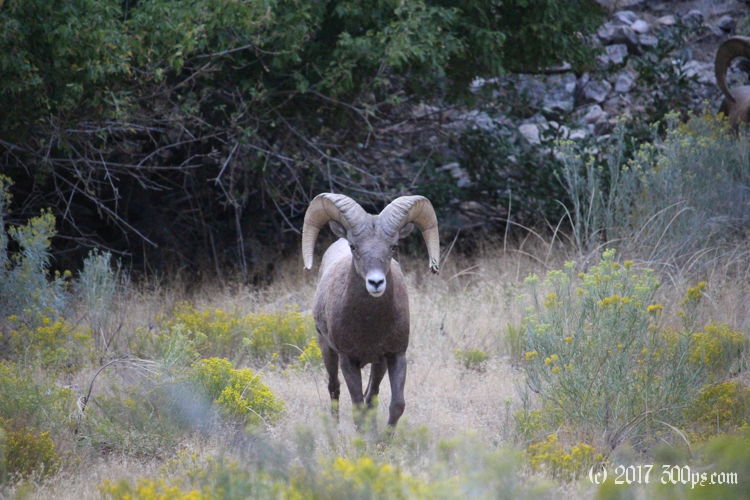 In the parking lot at the Jones Hole fish hatchery I take all the gear off of the bike and rearrange it for backpacking mode. A group of hikers in their 50's watch bemusedly as I unstuff and restuff various bags and packs. They have no gear with them, I wonder where they came from. There's a lot more going on here at this trailhead than I expected. Good in a way, I'm more comfortable leaving the motorcycle here than completely alone on a dirt road like I've done a few times recently.

It's an easy hike to the confluence of the Jones and Ely creeks. There I find the back-country "campground" that I got a permit for. It's just two picnic tables in close proximity with a shared bear locker. The other site is occupied by a teenager and an older man, much to my chagrin. I was hoping for a little more solitude. Too late to do anything about it tonight, I set up camp and make an early dinner so I can go exploring. First I hike back to the pictograph site that I skipped on the way down. They are drawings on the cliff wall made by an ancient indigenous group. I saw a few of these over in Capitol Reef when I travelled through the area by bicycle in 2014; they've got that same blocky, almost humorous style of say a young teenager doodling during math class.

Next I head back down the trail to get a look at Green River which is where this canyon ends. On the way I run into a few bighorn sheep. I've seen them before but never in such close proximity. Since the canyon is pretty narrow, there's not a lot of room for us to pass. I catch a glimpse of an animal running along the steep hill just before it becomes canyon wall, light brown, moving fast; I initially think coyote but it doesn't have the ears and doesn't move like a canine. I try to get a better look but it disappears among the sagebrush. It's quite possibly a mountain lion but I can't be sure. It may be stalking the bighorns.

The trail dumps me straight into a campground for rafters, full of those 50-somethings I saw up at the trailhead. So that's how they got here -- by boat. They've got a full kitchen setup with stainless steel tables, pots, and a camp sink. I guess you can afford to go heavy when you've got a boat. They offer me cookies and we chat for a bit. One of them has a son who is studying at MIT; we talk Boston. I don't stay long so I can catch a glimpse of the sunset and get back to my tent before it gets too dark.

I ended up hiking 8 miles with all of this up and down on Jones Creek. Tomorrow I plan to explore Ely Creek.