I have a run-in with a guy in an SUV who is tailgating me. I stop short, he tries to pass me, I pull out again to block him. I confess that I get a little carried away in chewing him out, perhaps witnessing the obnoxiousness at the visitor center has put me on edge. At any rate the SUV backs off after that... 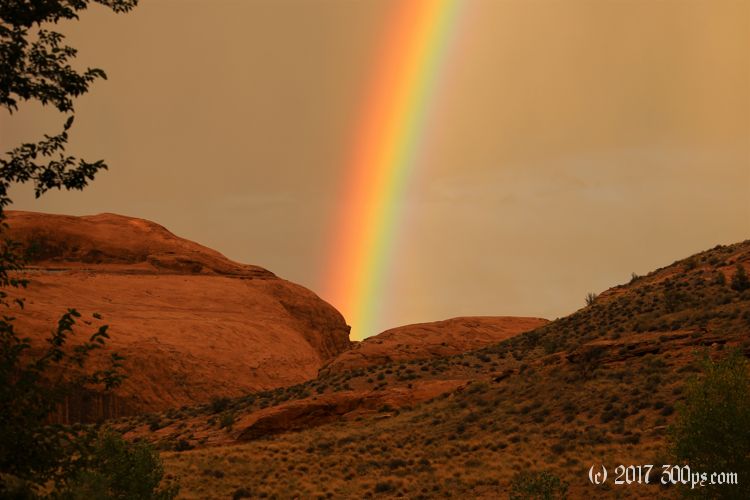 I pack up and head west into Utah on I70, then turn south on 191 towards Moab. I've cycled this part before; it's amazing how it just flies by on a motorcycle. Hot and sunny again but hints of unsettled weather in the air today. I find a campsite in Goose Island campground, a BLM site just up Route 128 on the Colorado River outside of Moab. I know from past experience that lodging in Moab is expensive and difficult to come by so I'm happy to have a place to crash; it's only just after noon and I've got the last campsite available in Goose Island.

I go into Moab to do laundry and shop for supplies. The town is just as I remember it: a jumble of Jeeps, dune buggies, motorcycles, campers and climbers and mountain bikers of all descriptions. I drop my stuff back at the campground and head for Arches National Park, a place I skipped when I was on the bicycle because it's one of those one-way, up-and-back rides that I find somewhat demoralizing when cycling. The visitor center parking lot is busy and tense. A guy in an RV almost runs into a pedestrian on purpose, the pedestrian slaps the side of the truck, obscenities exchanged.

I've recouped the 80 dollars I spent on the National Parks annual pass.

They are doing road work in the park at night. The campground is closed and a few of the pullouts are blocked off. I stop at a few to take pictures and park the bike to hike around when it seems worthwhile.

I have a run-in with a guy in an SUV who is tailgating me. I stop short, he tries to pass me, I pull out again to block him. I confess that I get a little carried away in chewing him out, perhaps witnessing the obnoxiousness at the visitor center has put me on edge. At any rate the SUV backs off after that.

I ride to the end of the road, park the bike, and go for a longish hike to Double O Arch (see next page). I swing back by Moab on my way to the campground to grab something to drink. I get doused by rain squalls a couple of times in the process. In front of a gas station mini-mart I meet a cyclist with homemade, plastic-bucket panniers. His name is Stan, a Mormon from Wyoming, and he wants to ride all the way to Chile. I tell him about my trip in the opposite direction. He says I'm the first person he has met who has done an end-to-end trip like that. It's getting late and his Warmshowers host in Moab fell through so I invite him to come camp with me, it's only a mile and a half away.

Stan shows up when I'm making dinner. We chat about all the challenges involved with riding through Latin America. He is having spoke problems, already broken 5 just since Salt Lake City. I try to stress that he should take care of that before getting into Mexico. As I well know, strong wheels are about the most important piece of equipment for that trip. I get the feeling he doesn't have a lot of money saved up, he's trying to stay with members of his church or with Warmshowers hosts, with mixed results. That strategy won't be easy in Latin America. I tell him about how many cyclists stay with the bomberos (firefighters), that's probably his best bet down there if he can't afford getting room.

My neighbor at the campground is a British guy who is motorcycling his way around the world on dirt bike. He has already crossed Asia, stopped for a year to work teaching English in Bangkok, then flew his bike from Malaysia to Vancouver. He's riding around the back country in the West before ending his trip in L.A. where he will catch a flight to the U.K.

Between the three of us we've got a few things to discuss about world travel...